My Book Review of Persepolis

This is my review of Marjane Satrapi’s Persepolis: The Complete Series. This is my first time reading a graphic novel about a true-life autobiographical theme. My usual graphic novel readings are of super heroes and the like, so this was a first for me. I began reading, fully expecting that I would learn a great deal about middle eastern cultures. Persepolis did not disappoint my desire to learn, and understand women in the Islamic revolution.

The theme of the book, in my view, can best be described as an oppressed woman living during wartime.

Don't use plagiarized sources. Get your custom essay on
“ My Book Review of Persepolis ”
Get custom paper
NEW! smart matching with writer

However it cannot be placed that simply. Marjane lived through many things that most people in the west have never experienced. Death, pain, and fear rampant in her life. Things that we would consider minor offenses, and even normal in the west, were enough to warrant torture or execution in Iran. The most prevalent theme would be that she was always looking for a way to live her life based on her own beliefs.

The main characters of Persepolis: The Complete Series, with an overview of the characters. Marjane/Marji she is the protagonist. The story is about her life. Taji Satrapi is Marji’s mother. She detests the way things are in Iran and actively protested. Ebi Satrapi is Marji’s father. He also protested and photographed riots. Marjane’s Grandmother was a great storyteller and often told Marji about the past and her family history. Marji’s uncle Anoosh defected to Russia as a communist, but returned years later.

Marji’s story began with her giving an introduction to her life as a 10 year old. Things had changed drastically from the life that she had known. No longer could girls go to school with boys, and girls were forced to wear a veil. She was no longer taught about secular things such as science. Since her great grandfather, the Qajar emperor, was overthrown most of her family’s things were confiscated and family members imprisoned. She then vowed to learn everything she could about the Revolution.

When Marji’s uncle Anoosh was executed she lost her faith. Marji noted that as regimes changed, all of her neighbors would change to suit it. During the Iranian Iraqi war she noted the bombings, and martyrs with funeral processions twice daily. The regime became more oppressive during wartime, and executed many more people.

After a bomb hit her street, she found her friend’s dead body, and it tore her heart to pieces. That trauma caused her to become rebellious and she was kicked out of school. Marji’s family sent her to Austria for schooling and protection. When in Austria she lives with nuns. Her new freedom makes her excited. Marji makes many friends and becomes popular. She spends Christmas break with her friend Lucia’s family. Marji gets kicked out of the boarding school and moves in with Julie and her mother. She is disgusted by how Julie treated her mother. It was there Marji learned about the prevalence of premarital sex.

Marji moved around a lot. She fell in love with a boy named Enrique, but he was gay. That was when she began using drugs. She became known as a drug dealer after giving drugs to her new boyfriend Markus. Markus cheated on Marji. She became homeless for a few months and became very ill with bronchitis. She gotten back into contact with her parents though her mother’s friend, and arranged to go back to Iran.

Once back in Iran Marji feels more oppressed than ever before. War has ravaged her home, her family, and her friends. She became depressed. Marji saw several therapists, but was unable to break free from her depression. One therapist gave her antidepressants. When her parents went on a trip she tried to commit suicide. Miraculously she survived slitting her wrists and overdosing. Marji took it as a sign to keep living and changes her life.

At a party Marji met Reza and they got along well. They became a couple. She and Reza make it into university. The university is divided where men and women cannot interact with each other so she and Reza have to hide their love. They had made many friends and partied at other people’s houses. They got raided by the Guardians of the Revolution, and most people were arrested. However one of their friends committed suicide by jumping out of the window.

Marji and Reza got married, but soon she feels stuck and unhappy. They no longer get along as well. Eventually she asks Reza for a divorce, but he wants to stay married. After the divorce her parents want her to move back to Europe permanently, so that she can have a safer and better life. As Marji prepares to get on the plane to France, her mother forbade her to ever return to Iran. Her Grandmother died soon after her move to France.

I relatively enjoyed the book being in comic form. I think it made it easier to visualize what was happening in the story. I understood the need to express the violent aspects of war as well. Though talking about the death of her friend and finding the body was hard for me to take. I have PTSD, and I had found one of my friends dead before when I was 14 from a drug overdose. So I understand the trauma is palpable. I liked that her family supported her decisions, and stood behind her when she was trying to figure out what she wanted for her life. It shows that no matter the culture, some parents are actually supportive and caring.

Persepolis: The Complete Series had changed my view of the middle east. Through the book I learned that though there are many conformist people who emulate the sexism and hateful oppression, that there are just as many men and women fighting for change. Who only want a better less oppressive life. These things remind me of the western world today. We are all still fighting for what we believe in, no matter what side of the debate we are on. We all only want a better life for ourselves and a brighter future.

My Book Review of Persepolis. (2021, Apr 13). Retrieved from https://studymoose.com/my-book-review-of-persepolis-essay 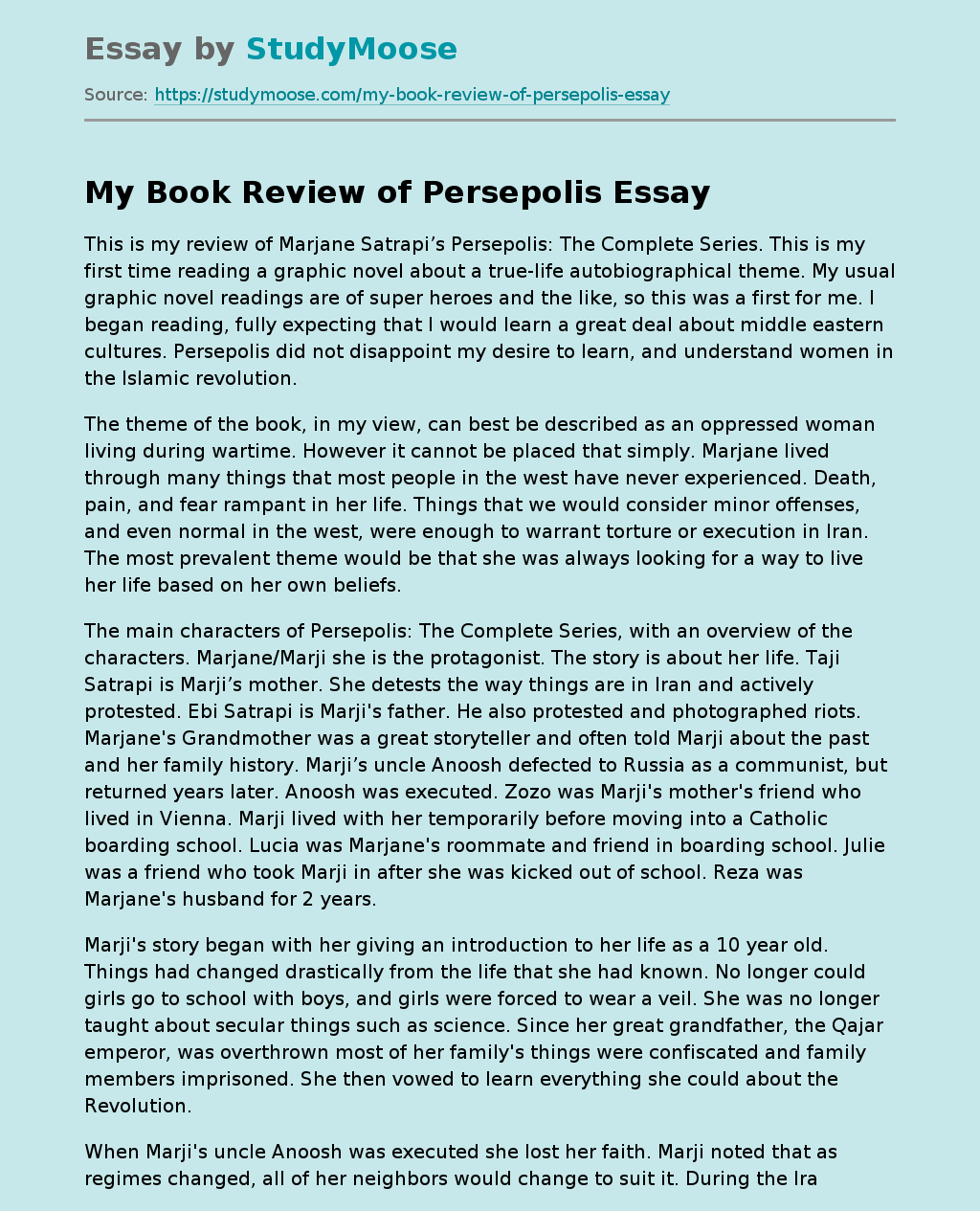