My Ambition to Become a Pilot

What is ambition? Ambition is a strong desire to achieve something. It differs from man to man. Most of die people want to become rich; many want to be powerful; others have certain goals in their life to achieve. However, majority of them are after wealth to become the richest in the world. I too have an ambition. But their ends all the similarities. Unlike die others, I am not after wealth or influence or power or material gains or anything of that sort.

Don't use plagiarized sources.
Get Your Custom Essay on My Ambition to Become a Pilot Just from $13,9/Page

This is it: I want to become a Pilot Officer in die GDP (General Duties Pilot) branch of die Indian Air Force. It is my uncle’s influence. He is a Wing Commander in the IAF. I too want to become like him and serve die country. There are few modes of entries to become the pilot. I prefer this: first I want to finish my graduation. I have just now finished my Plus Two public examination with Math’s, Physics, and Chemistry as the main stream.

Besides, there is this Computer Science also.

I opted for this group because, to become a pilot, one should have taken this group in the high school. Hence, I studied hard in die lower standards to select first group. I intend to join NCC (C) wing in the college, for again it is an added qualification to join the IAF. As they say, begin at die lowest to reach the highest I have been planning every move of mine that would take me to the threshold of my ambition. I call it as my Vision & Mission! The selection is done based on die performance in die UPSC competitive examination, and then the personal interview before die Service Selection Board, and finally the stringent medical test. Alter qualifying in all these tests; one may be inducted into the defense services. Until then the examination is common for Army, Navy and Air Force.

It is termed as the combined defense service examination, conducted by the National Defense Academy, better known as NDA or the Indian Military Academy (IMA). However, there are two types of entries: Short Service Commission (SSC) and Permanent Commission. My uncle had joined the Permanent Commission and hence he could reach the rank of a Wing Commander at the age of 46 now. As he has long service ahead of him, he is sure to become die Air Chief Marshall. I too want to join the Permanent Commission. This is my ambition. I am interested in planes. But that does not mean that I want to become a pilot after obtaining Commercial Pilot License (CPL) from any living club and become a commercial pilot. It is just that I want to be a fighter jet pilot, especially in the Indian Air Force.

My Ambition to Become a Pilot. (2016, Nov 08). Retrieved from https://studymoose.com/my-ambition-to-become-a-pilot-essay 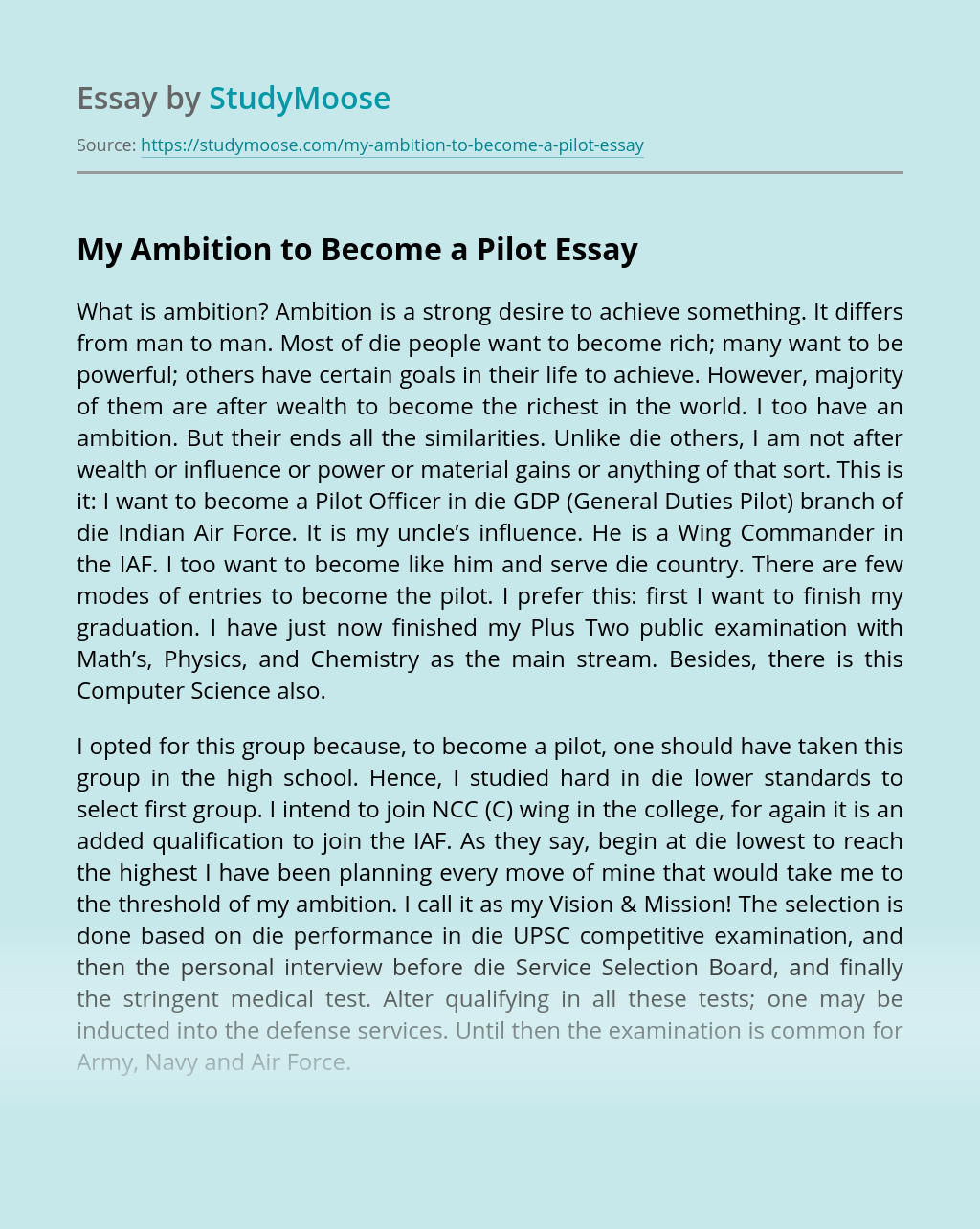 Prepare the first seven components of your venture’s Financial Prospectus. The Financial Prospectus must include the information you provided in the individual assignments from Week One and Two, revised as necessary based on material covered in subsequent workshops and organized with new material added as necessary. Post your assignment as a Microsoft® Word attachment in...

The following memo is an Employment Law Compliance Plan for Landslides Limousines. The plan summarizes key federal and Texas State employment laws. This report also includes recommendations and consequences of these laws. Please note that Landslide Limousines is subject to additional laws if the business exceeds employing more than 50 individuals. If Landslide Limousines fails...

1. Pink’s Stupid Girls created 2006 2. Narrative or storyline; Young girl is sitting on couch, watching TV which shows a range of depictions of women. The ‘good’ and ‘bad’ angels hover over her shoulders. The images include women as ditzy, carrying little dogs, car-washing in minimal clothing, as the president, playing football. 3. The...

Culture is a way of life for people, and it helps construct the foundation for people’s values, beliefs, and choices in life. Culture makes societies unique, making it an essential element in influencing our everyday lives. As it’s carried from generation to generation, people will adapt to new technology and changes, but the principals remain...

View sample
The Importance Of Play In Early Childhood

Abstract Play in a child’s life is extremely important. Starting with mental, social, health and just how they will develop as they grow. In researching several theories, we will look at how play and the lack there of has changed over the years. How children react to play and the environment they are placed in....