In my personal experience, I was able to attend a wedding ceremony of two badjao individuals during my trip in the Philippine islands, specifically in Sulu, way back in 2007. The indigenous tribe of Badjao was considered as the hierarchical result of different ethnic groups in Philippines, Sabah, Brunei and Sarawak. According to Rodell (2001), the cultural minority of Badjao was part of the Malaysian refugees that migrated to Sulu, Philippine archipelago during the last four decades (p. 78). Malaysians considered these Bajau tribes as part of the Sea Gypsies since both have the same similarities in terms of customs, traditions and beliefs.

Don't use plagiarized sources.
Get Your Custom Essay on Multi-Cultural Experience: Badjao Filipinos Just from $13,9/Page

On the other hand, Ooi (2004) proposed that Badjao tribes actually originated from Indonesian origins, specifically to the Indonesian tribes of Sulawesi, due to the spread of Indonesian influence via the sea trade, Trepang (p. 200). However, despite of several theoretical propositions on Bajau’s mother roots, the origins of this tribe were still unclear. As for my experience with this cultural tribe, I was able to observe three basic components of their culture: (1) religion, (2) habitat and living, and (3) foods that they usually prepare for their guests.

Prior to my tour, I was informed by our tour guide that most Badjao tribes existing today were already part of the modern badjao cultural community. Due to the vast influence of modernization and commercialization of the rural Sulu area, especially in their mainland or bayan, the cultural tribe of Badjao was altered towards a highly civilized community. In this personal document, I covered the cultural practices of Badjao, specifically during their wedding ceremony, food preferences and their community values.

Discussion Badjao Tribe: Overview The Badjau tribe is originally from Zamboanga located in Southern Philippine Islands, which co-exists with various tribes – Suluk, Bajau-Suluk, etc – present in the same rural community they called Pulau Mabul. The term Badjao is derived from the diverse collection of Sama or Bajao speaking individual. According to Ooi (2004), Badjao spreads over a vast area of islands and littoral, extending from the central Philippines through the Sulu Archipelago to the eastern coast of Borneo and from coastal Sulawesi southward through the Moluccas to western Timor (p. 00).

Badjao communities are now existing in Malaysia, Indonesia and most of all, the Philippines with a demographical population of approximately 400,000 as of 2001 (Rodell 2001 p. 78). However, despite of the massive communities of Badjao in Sulu islands, most of these communities are now being hybridized by different co-existing tribes, such as Cebuanos, Leytenians, etc. According to Flower et al. (2002), the most traditionally inclined Badjao subculture are the Badjo Laut or those living near the sea coasts (p. 36).

Badjao Laut groups are unique compared to other minority groups of Badjao; since, most of the badjao laut families spend most of their life on their boats than on land. As supported by Flower et al. (2002), these subgroups usually travel in groups while fishing but they still possess significant gathering areas, such as Bohay Dulang, Pulau Kulapuan, Kampong labuan, etc (p. 36). The modernization and the opening of the rural community to foreign tourists and urban visitors are the pointed cause of the decline in badjao tribe’s cultural qualities and traditions.

The Wedding Ceremony and Religion As for my experience of Badjao’s wedding, some of most observable points were (1) the influence of superstition, (2) the manifestations of tight family ties, (3) high regards of the tribe to the elderly members attending the wedding, and their (4) religion influenced by Badjao customs and traditions. In my fist observation, the two sides of the wedding parties were so much indulged with their superstitious beliefs, which actually manifested from the start of the wedding planning until the end of the wedding ceremony.

The wedding occurred last July 1, 2007 and according to the elderly members of the two families, this date is considered as the lucky day for their marriage since July symbolizes the month of prosperity. According to Philips (2001), most south-Asian culture considers rain as the symbol of prosperity; hence, these individuals consider lining the events of their life parallel to the rainy seasons as their regards of calling prosperity to their lives (p. 391).

During the wedding ceremony, the characters of the usual Christian ceremony, such as the Bridesmaid, maid of honor, etc, were not even present. I tried inquiring this to one of the elders but unfortunately, I was overheard by some of the people beside the elder. The good thing was they considered my inquiry as a wise one; hence, they answered me in a very straight quote, “hindi ito Christian Wedding, ito ay Kasal ng Bajao – this is not a Christian wedding but a Badjao wedding”.

From that moment on, I decided to use my knowledge on Christian weddings to compare some of the attributes between two wedding settings. Throughout the ceremony, I observed that the priest (pari) was full of accessories and ornaments made from animal feathers, skins and other textile materials with weird decorations. They did not use figurines of saints, and usually refer to Bathala, which they considered as their god. According to Young (2007), Badjao and most of the Visayan tribes of the Southeastern countries, such as the Philippines, practiced the religion of animism (p. 2). Badjao Food Traditions During the wedding reception, I noticed a very different setup compared to the usual Christian weddings. Aside from the food, the Badjao elders and the wedded couple started a folk dance offered to their god. They danced in circles with the couple in the middle, while the godfathers and godmothers place their gifts under the feet of the dancing couple. When I asked the elder about this, he smiled and told me that this is to honor the wedding ceremony and to bless the reception.

After the little opening ceremony, we proceeded to the reception and the food was introduced to the guests. The most common characteristics of all the dishes were the use of coconut milk in their recipes, and the absence of chicken or red meat. According to Rodell (2001), badjaos lived using the industry of fishing as their main monetary source and food sources as well (p. 79). However, when I asked our tour guide about the absence of chicken, pork or beef, she mentioned that these are parts of the Badjao’s wedding traditions and not related to the economic sources of the community.

According to Philips (2001), badjao’s religion is a combination of both Muslim and Animism; although, it is actually the traditions of Animism that most of the time become evident than the Badjaos’ Muslim beliefs (p. 391). According to the elder whom I interviewed in the wedding, red meats are not being included in the reception because it ca bring bad luck or malas. Some of the elders added that red meats were actually a sign of man’s sin according to their god; hence, they do not prepare these dishes in holy ceremonies, such as weddings. The Community Values

After the wedding reception and my observations in badjaos’ food traditions, I was able to witness the social gatherings of the families from both sides of the wedded parties. During my observations, I noticed a weird social sign that younger members of the group perform whenever they approached the elders of the group. These individuals usually say, “mano po” then get the right hand of their elders and lean it to their forehead. I asked our tour guide about this tradition and she explained that this is actually their sign of respect to their elders.

In my multi-cultural experience with the Badjao tribes, the main components that I observed were (1) their high regards to their religion and cultural beliefs, (2) the value of the elder’s opinion and superstitions, and (3) the respect of the younger badjaos to their elders. My exposure in a badjao wedding made me understand the cultural components of their traditional ceremonies and how it actually changed due to the cultural influences of urbanized and Christian society. Badjao was able to maintain the old-fashioned religion of animism despite of the Muslim dominance in their region. 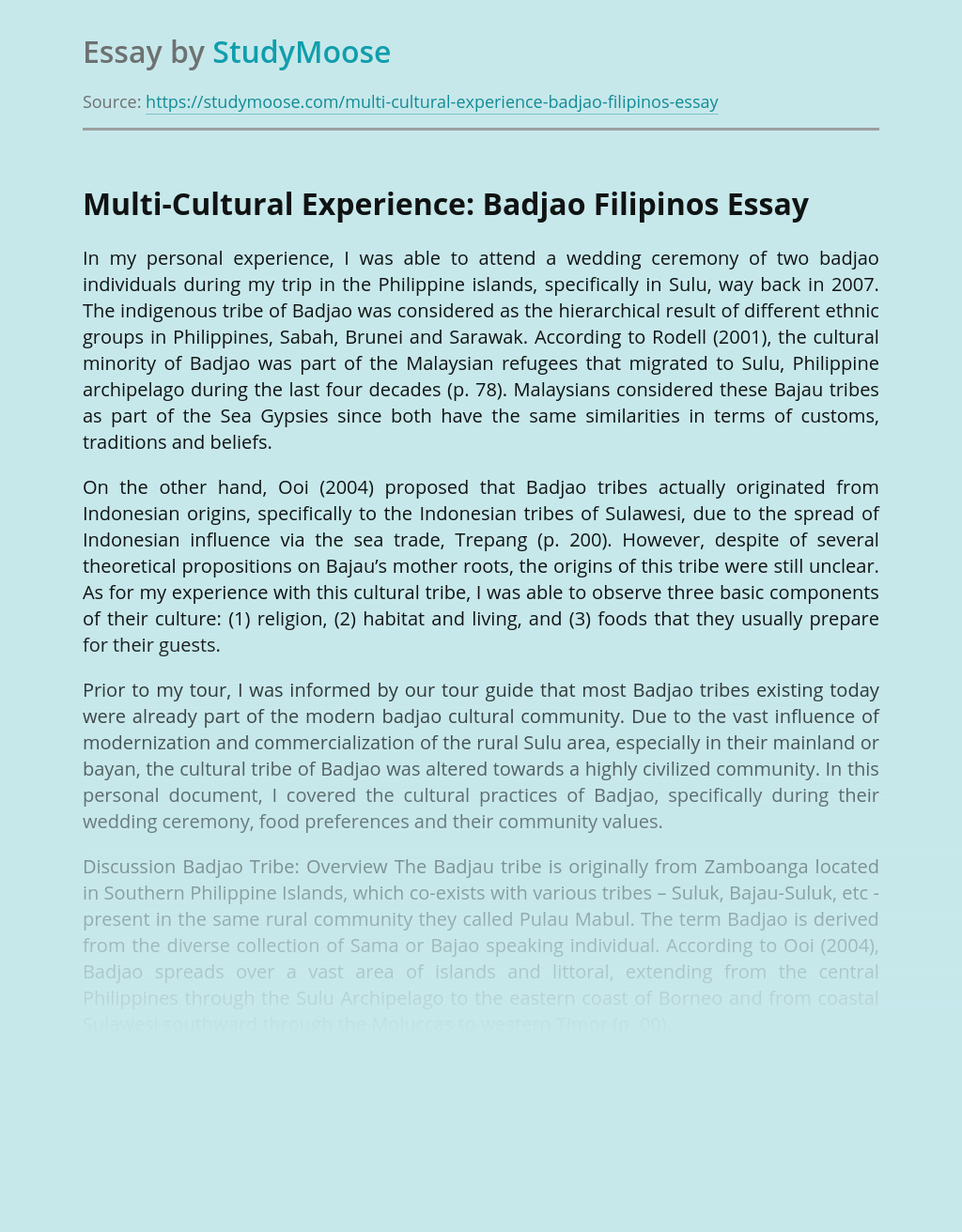 English vs. Mother tongue as a medium of instruction

I. Introduction Background of the Study Prior to we talk about the so-called Gullas costs or the proposed act conditioning and enhancing using English as a medium of guideline, let’s get a backgrounder on the state of education in the Philippines. For each 100 kids that begin grade one in our nation, just 65 will...

Exas Philippines, Incorporated is a privately owned company by Japanese investor and run and managed by Japanese consultants and experts. It’s main business since the birth of their mother company are METAL STAMPING PRODUCTION (transient or manual and progressive dieset) and TOOL and DIE DESIGNING, PROCESSING and VALIDATION. I belonged in these two production businesses....

Get Essay
Enrollment in Technological Institute of the Philippines

Registration procedure is a must in every school. Through this, trainee will have a connection in between them and the organization itself. In this procedure, students likewise part to wonder or to expect what if seems like to be in the institution they are going to enroll. This research study talks about those expectations and...

Filipino Philosophy is the attitude, worldview, and notion of the natural citizens of the Philippines towards the day-to-day experiences in life, religion, communication, survival, interrelationship with people and intra-relationship with his sakop or to oneself – the “I,” and the uplifting of one’s soul – the Filipino being. Filipinos are used to be stereotyped as...

It’s more fun in the Philippines