Yes, it is my opinion that the ideology of the cold war was reflected by the tension shown in the movie “Dr. Strangelove” by Stanley Kubrick. The tension between peace and war, like the U. S. and the Soviets during the cold war, is reflected by the actors the movie portrayed. The movie “Dr. Strangelove” gave a satirical look at how war can be manipulated and the players who manipulate it. The secretiveness of the Cold war was reflected poignantly in the movie, causing confusion which helped key players to execute their evil plans.

Don't use plagiarized sources. Get your custom essay on
“ Movie Dr. Strangelove ”
Get custom paper
NEW! smart matching with writer

The Cold War was the first public war held behind closed doors. Diplomacy was used, per say, instead of action.

Although both sides of the conflict were readily able to show force no really force was used to end the war. Few Americans really knew just how close the film was to real life. The film including the characters and script were very similar to the policies and military leaders of the Cold War.

The secrecy was vital to the tension during the Cold war and to the movie. During that time in America there were no Freedom of Information Act that would give light to citizens and this caused much speculation and visions of devastating war. But now with information readily available it is almost shocking just how much the movie mirrored real life.

Dr. Strangelove in the movie reminded me of Henry Kissinger. The ending of the movie gave me a glimpse of what I believe would happen if there were such a mistake and just how political officials would feel if this would happen.

The statement by General Turgidson, “Mr. President I’m not saying we would get our hair mussed, but I do say no more than 10-20 million killed, tops! ” is how most political leaders would actually think and do think. During war there are acceptable levels of casualties and to most civilians it would be shocking at how high the levels are.

Since the adopted policy of President Theodore Roosevelt’s that instead of opposing intervention by European nations in the Western Hemisphere that the U. S. would intervene when necessary to guarantee political and economic stability around the world. This concept has been a cornerstone of American foreign policy from the 1900’s on up to today. To fight the rise and influence of the Soviet Union after WWII the U. S. adopted containment to prevent the rising of communist power. The soviets responded by establishing Communist governments in Eastern Europe.

This was the beginning of the Cold War. This war was not fought by bullets but by propaganda and secrets. Allies for this war was gained by giving economic and military assistance. During this war there were times that were hot and times there were thaws. So it is very easy for me to see the reflection of tensions that mirrored real life when comparing the Cold War and the movie “Dr. Strangelove”. Reference: Kubrick, S. (Director & Producer). (2004). Dr. Strangelove, or how I learned to stop worrying and love the bomb [Motion Picture]. United States: Columbia TriStar Home Entertainment [DVD] 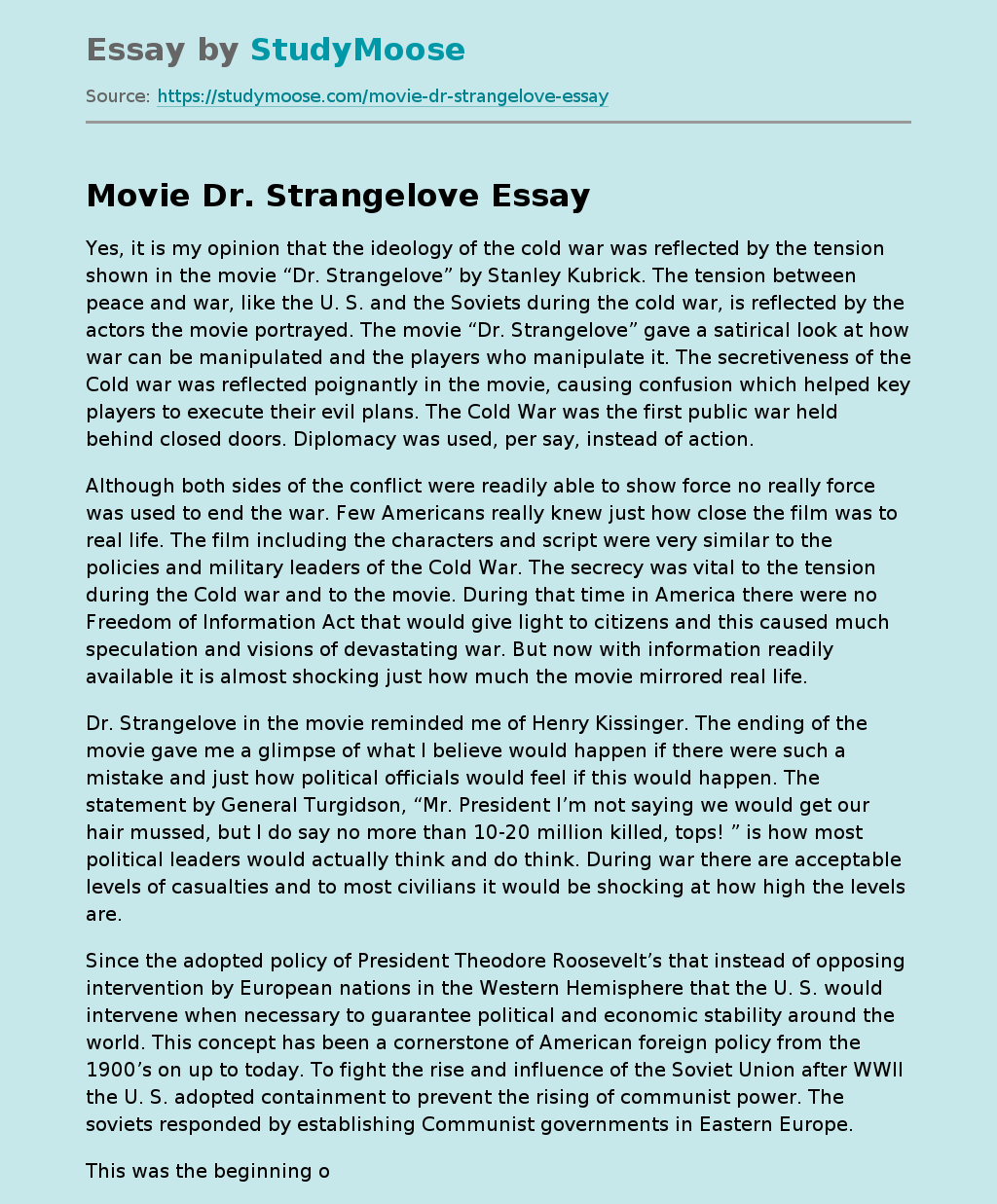