Most people, when asked what the deepest place on Earth is, answer “The Dragon hole”. And that is true, but do you actually know how it came to be? Most people don’t, so I’m here to tell it.

Back then, on Mount Olympus Zeus looked down on the Earth with a depressed face. The Earth was so boring and flat. Surely humans wanted something other than the same fields, oceans and mountains. He just didn’t know what. So he called the gods to a meeting to figure out this situation.

Don't use plagiarized sources. Get your custom essay on
“ Most people when asked what the deepest place on Earth is answer ”
Get custom paper
NEW! smart matching with writer

Athena proposed we add a new animal. “Perhaps a friendly one that swims the seas”.

“A good Idea, but I do not think man is ready for that. More suggestions, please!”

And so the gods spoke, questioned and quarreled. But they still could not come to a decision. “How about a friendly animal, like Athena suggested. But one that is also vicious. And eats fish!” said Poseidon. “No! A land animal, one that humans can hunt for food.

” Said Artemis. “That will be much more beneficial than an animal that lives in the sea that will not help the humans!” So Artemis and Poseidon started fighting until Zeus yelled at them to stop. “I called you up here to help me figure out something and I will not tolerate this fighting. If you cannot help me figure this out then you all shall leave.”

So Zeus sent the gods out, and went to his garden to think over the decision.

“Maybe, he thought it shouldn’t be an animal, but an actual land formation.”

But of course Zeus could not make this decision all by himself. He needed help from the wisest god of all, Athena. Athena, who was annoyed at Zeus for kicking her and all the gods out was not too willing to help, but decided to anyway. After all, he was her father. Zeus told her his idea, and to his surprise Athena actually liked it. The question was, how would they create it? Athena said “Artemis and Poseidon are still angry with eachother. We can host a contest. Whoever creates the deepest hole will be able to add their animal to the Earth.” And of course, Artemis and Poseidon were happy to do it. Artemis called on all of the animals, who dug and dug and dug until they had formed a very deep hole. Poseidon laughed when he saw it. “Surely I can do much better”.

And he did. He shifted the plates in the ocean and the ground, and soon enough there was an earthquake that spilt part of the ground into an enormous hole that soon filled up with water. It was obvious, Poseidon was the clear winner. And as promised, Poseidon was able to add his animal to the sea and called it shark. And that is how the deepest hole on earth came to be.

Most people when asked what the deepest place on Earth is answer. (2019, Nov 16). Retrieved from https://studymoose.com/most-people-when-asked-what-the-deepest-place-on-earth-is-answer-example-essay 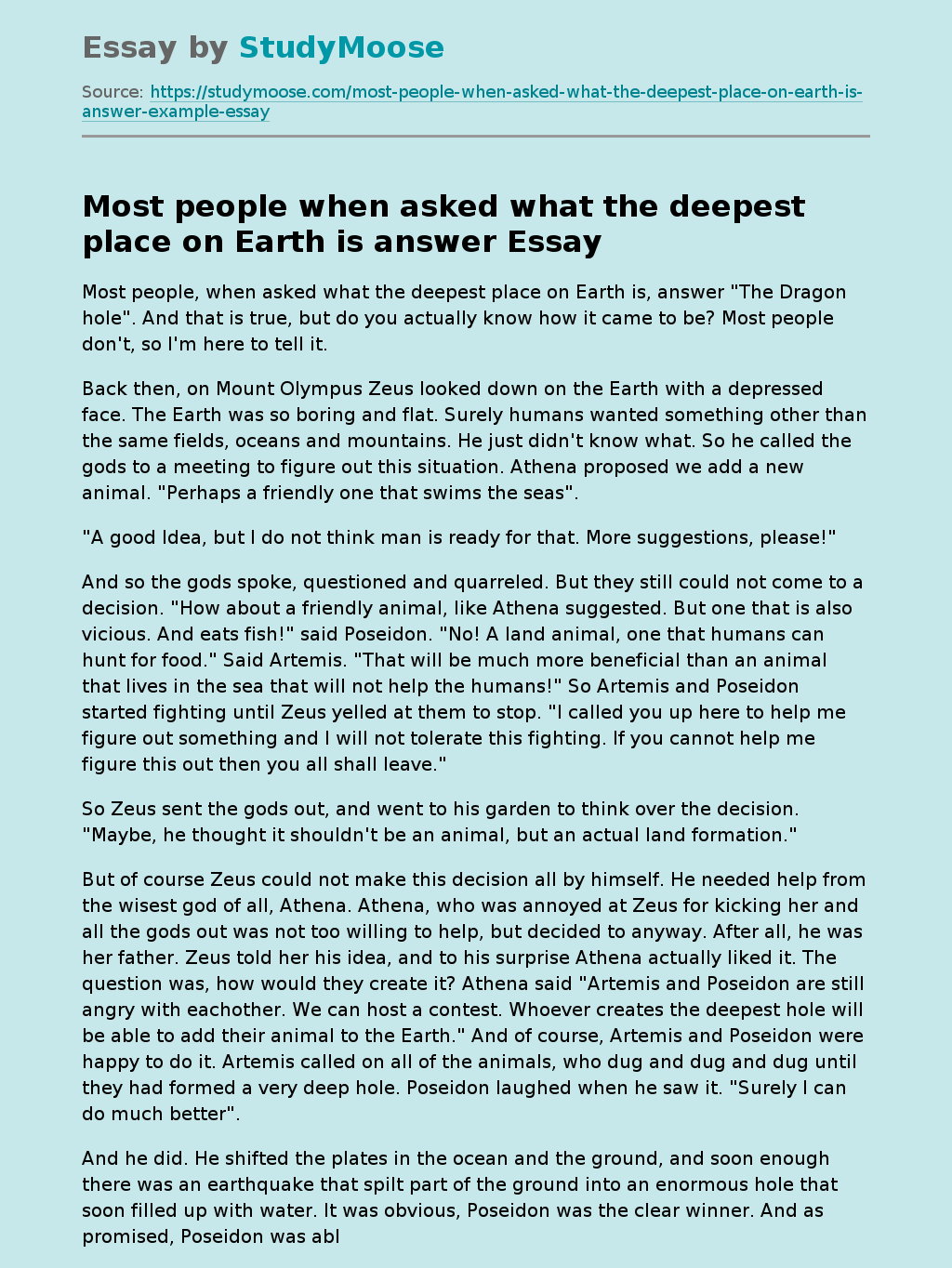