Most people can think of what defines a cult when asked, thinking of methods such as mind control, behavioral and informational control as well as abuse and a dictatorship style of authority. Sects are thought to be different branches of a major world religion. Most major religions have sects within them, for example, the religion of Islam has Sunnis and Shias and the Christian faith has Baptists and Lutherans. Some sects do have characteristics like cults such as a tight-knit community, strict rules and friends from outside the community are discouraged but they can live and work wherever they wished and had to all powerful leader.

Don't use plagiarized sources. Get your custom essay on
“ Most people can think of what defines a cult when asked thinking ”
Get custom paper
NEW! smart matching with writer

Most people who join cults join at a time when they are vulnerable. People in cults are often idealists. They think they will make a difference to humanity, save it from the apocalypse or that they will best serve their god or their ideals within the group. The idealism mixed with recent emotional distress may cause a person to look for a solution to his or her problems.

Cults provide the structure, authority, and close social contacts that can feel like a solution and a purpose. Once a person joins a cult and conforms to the cult leader’s way on how to think and how to live, psychologists describe a sudden shift in their personality. This shift helps account for the difficulty that friends and families of victims can have in getting into contact with their loved ones. Most cults tell members to distance themselves from family and friends who advise them against joining the cult.

?People who used to be close to the victim often feel like the person they’re trying to reach has become a stranger.

The People’s Temple was a NRM founded by Jim Jones (real name James Warren Jones) first in Indianapolis where he performed spiritual healings. Peoples Temple was a Christian religion with communist and socialist aspects put in it. His church then focused on helping the poor. His church and its followers became socialist. Jones expanded further to LA and San Francisco. He then claimed to have a vision of Chicago coming under nuclear attack and in 1974 Jones leased a piece of land in Guyana and it became The Peoples Temple Agricultural Program or Jonestown.

What I found most interesting about this NRM was that a religion that began out helping the poor ended up committing mass murder/suicide killing over 900 people including U.S congressman Leo Ryan.

Some controversies regarding people’s temple would be the fact that it is clear if many members committed suicide in their own free will or if they were murdered by the cult using forced injection. There are some accounts of people not wanting to commit suicide by drinking flavour-aid laced with cyanide. The people who resisted were injected with poison instead. Another controversy at the time was the communist aspect of the cult as at the time America and the western world was anti-communist.

The NRM’s covered in this module were People’s Temple and Scientology. I think these two NRM’s are both terrible organizations. Peoples Temple killing over 900 people and while Scientology has not been charged with any murders there has been a conspiracy about ‘Operation Snow White’, one of the biggest infiltrations of the U.S government to date. They are also known for offering auditing sessions to rid one of “theatans.” These sessions cost several hundred dollars, and many are tricked into doing it more than just once. They are also known for distancing and cutting people off from friends and family. That’s why I think these two NRM’s are harmful to people, especially if they are in a vulnerable time of their life.

Most people can think of what defines a cult when asked thinking. (2019, Nov 15). Retrieved from https://studymoose.com/most-people-can-think-of-what-defines-a-cult-when-asked-thinking-example-essay 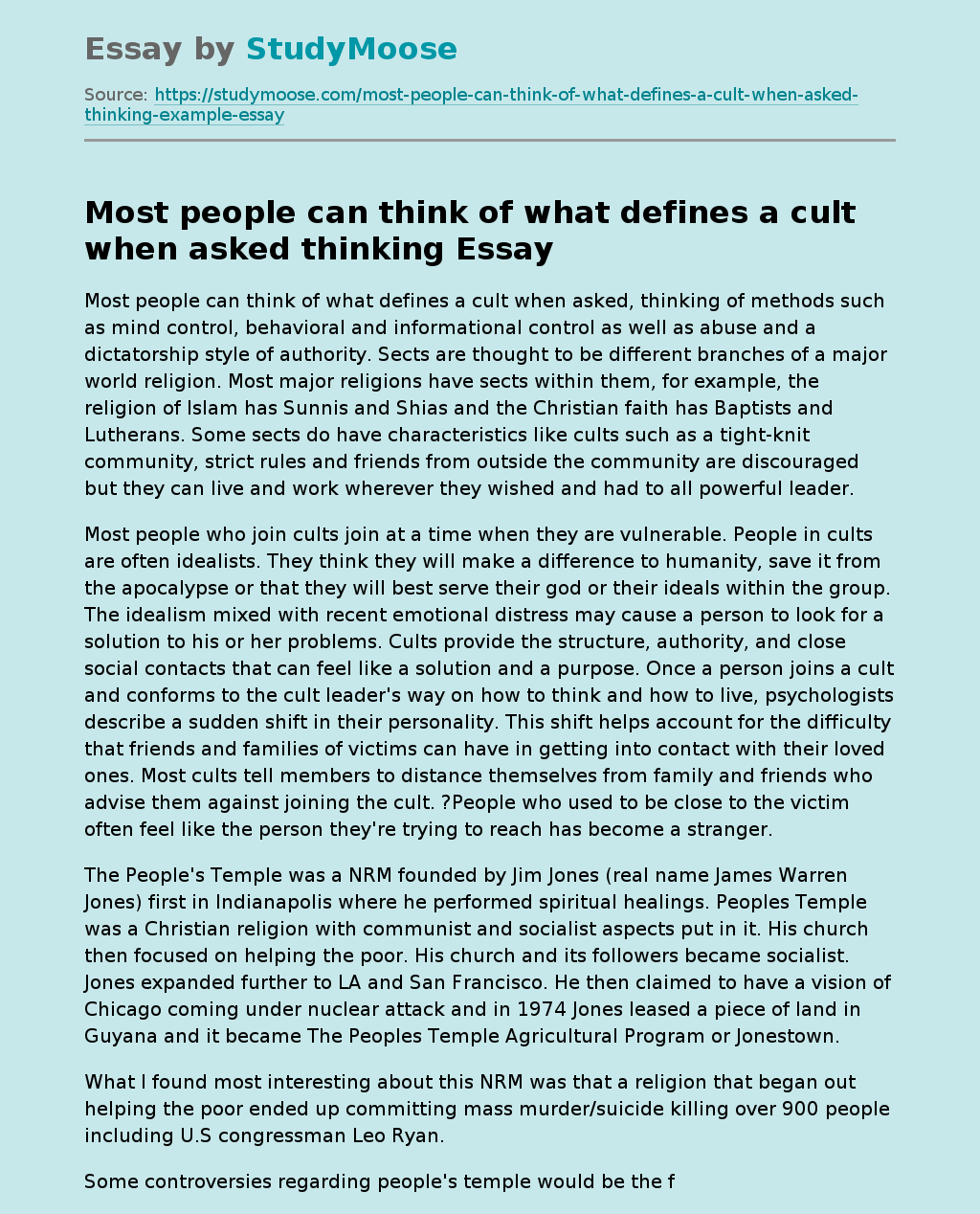