The things we know about land plant evolution are based on the information we got from the model plants like Arabidopsis thaliana, rice and trees like poplar, etc. But when it comes to mosses, we don’t know much about their evolution because only one moss genome has been published until now: Physcomitrella patens. Though, mosses evolved around 500 million years ago P. patens has evolved recently in comparison to other mosses i.e. about 5-10 million years ago (Rensing, 2017). Therefore, a lot of evolution has happened since the common ancestors of Physcomitrella and Arabidopsis.

Don't use plagiarized sources. Get your custom essay on
“ Moss Genome Importance ”
Get custom paper
NEW! smart matching with writer

There is a lot of information available on vascular plants but when we consider non seed and non-vascular plants the research is limited to a few species which are the model plants. Thus, there are a lot of gaps that need to be filled with the information that is yet to be discovered from different species of land plants to completely understand the organismal diversity. The fact that Bryum argenteum can be found on all the continents including Antarctica, is easy to grow, and is a model for heavy metal tolerance (Shaw and Albright 1990).

These make it a model moss because it tells us that it can withstand any kind of terrestrial environment (Pisa, Biersma et al. 2014). Mosses are important because there are around 13,000 species of mosses which is more than birds and even mammals.

Land plant evolution started with the adaptation to land by the green algae which used to live in the fresh water.

Charophytic algae are the closest relative of land plants. Chara braunii, a complex charophyte algal genome was studied and it was found that there are no whole genome duplications in C. braunii having a base chromosome number of n = 7 (Nishiyama, 2018). Copia type long terminal repeats (LTR) are a feature of most land plants and green algae which were missing in C. braunii (Nishiyama, 2018). It diverged from land plants around 550-750 million years ago but performs cytokinesis as land plants do by assembling a phragmoplast microtubule. The cell wall of C. braunii consists of cellulose embedded within a pectin and hemicellulose matrix just like in land plants (Iben S?rensen1, 2011).

Klebsormidium flaccidum, also a member of the charophyta division which is a terrestrial alga and explains the early transition step from aquatic algae to land plant. This is the only other published genome. To cope up with the terrestrial environment it had to develop genes that could face drought, high-intensity light and UV radiation (Hori, Maruyama et al. 2014). Charophytes and their land-based relatives bryophytes have not been studied to that extent.

The bryophytes include mosses, liverworts and hornworts. Moss species commonly studied for genetics and genomics are Physcomitrella patens, Bryum argenteum, Ceratodon purpureus, Sphagnum fallax but only one genome is sequenced and studied until now and that is P. patens. The genome of P. patens was studied with the help of synonymous substitution rates of paralogs, they were able to conclude that P. patens had two whole genome duplications (WGD) in its entire genome evolution (Lang, Ullrich et al. 2018). It is hypothesized that it had 7 chromosomes which went under two WGD and therefore, based on the pseudochromosomes that they were able to assemble, 27 chromosomes were identified using Sanger sequencing and BAC/fosmid paired end link support and karyotyped based on the size of the chromosomes (Lang, Ullrich et al. 2018). Based on this, we shouldn’t generalize every other moss genome and say that all of them have had a WGD in their genome evolution. To come to this kind of conclusions, we need proof which can only be provided by the study of other important mosses such as Bryum argenteum, Ceratadon purpureus, Sphagnum fallax. P. patens doesn’t have metal or desiccation tolerance whereas rest of the mosses have that so it cannot be accepted as the model for all the mosses.

P. patens is monoicous whereas Bryum argeteum is dioicous. Monoicous mosses (having antheridia and archegonia on the same plant) are capable of ‘full selfing’ creating a homozygous offspring but dioicous mosses (having antheridia and archegonia on separate individuals) like Bryum argenteum are very common in mosses. This is another piece of evidence why we should not rely on P. patens to represent all the mosses. All mosses are monoecious but only 40% of the mosses are monoicous whereas almost 85% of the angiosperms are monoecious but 100% of the angiosperms are dioicous (they can’t self-fertilize at the gametophytic stage) because they all produce pollen and ovule at the gametophyte stage. Ferns don’t have pollen, but their gametophyte is monoicous because they have a chemical control which prevents the production of the pollen.

B. argenteum shows shy male character, that is, greater female biasness in which the male spores abort frequently or don’t germinate relative to female spores. When grown in lab conditions the male to female ratio is 1:1 but when grown in field the male to female ratio is 1:4. But, what about the exact chemistry behind this male rarity due to which some of the distant species like Syntrichia has 4 out of 17 species composed of a single sex only (Lloyd R. Stark 2010).

Studies done on Liverworts and Hornworts

Marchantia polymorpha, a liverwort model plant which evolve around 450mya from Charophycean algae lacks any whole genome duplication (WGD) because the ancestral chromosome number of the extant liverwort is nine. No other liverwort genome has been studied yet, so we can’t exactly say that all the liverworts lack WGD (Bowman, Kohchi et al. 2017). No hornwort whole genome study has been published yet, so we don’t know much about their evolution. But organellar genome study of hornwort Anthoceros formosae (Kugita 2003) and Leiosporoceros dussii (Villarreal A, Turmel et al. 2018) tell us about how the genes found in the mitochondria and chloroplast of these genomes are similar to the genes found in other land plants such as liverwort – Marchantia polymorpha and moss – Physcomitrella patens.

Ferns are the seed free vascular plants and are the closest to all seed plants. The genomes of Azolla filicloides and Salvinia cucullate were sequenced and analyzed to have more insight in the evolution of land plants. After examining the transcription factors that are expressed in Arabidopsis seeds, it was found that ferns had 39 homologous of those 46 TFs which led them to a conclusion that many TF were already present in the seed free plants before the origin of seeds. Two whole genome duplications were identified in Azolla and Salvinia genomes by MAPS (Li, Brouwer et al. 2018).

The desiccation tolerance of Bryum argenteum is one of the most important characteristics of bryophytes and after studying the dehydration and rehydration of transcriptomes, we can say that mRNA is sequestered upon desiccation and new mRNA is recruited into the protein synthetic machinery (Jihong Li 2019). The TF transcripts are known that are sequestered and encode proteins which become active upon rehydration. We can study the RNA biology of those transcripts to see what is happening to the RNA when the plants face dehydration (Gao, Li et al. 2017).

In order to fully understand the unique features of a genome, we need to understand its RNA biology and small RNA biology. There are different kinds of small RNAs, but we are more curious about the small interfering RNA (siRNA) because of its interaction with DICER like proteins in plants and able to control the expression of transcripts.

In Selaginella moellendorffi (a young lycophyte), the small RNA epigenetically regulates the TE and gene activity with a size smaller to that of typical sRNAs i.e. 24 nucleotides with a size of 21 nucleotides when taken from the sporophyte tissue (Banks, Nishiyama et al. 2011). Lycophytes are ancient, but Selaginella is not ancient. The molecular evolution has sped up in Selaginella relative to other land plant genomes. Though The vegetative gametophyte of Marchantia polymorpha DNA methylation enrichment and 23-24 nt siRNA clusters at genomic loci with repetitive elements, matching the pattern in vascular plants.

In P. patens giant virus insertions are transcriptionally active and might protect gametes from viral infection via siRNA mediated silencing. Similar or different kind of small RNA biology and siRNA gene silencing might exist in the B. argenteum which might explain the reasons why it is tolerant to complete desiccation (Lang, Ullrich et al. 2018).

From the limited knowledge we have on mosses and land plants, it is evident that comparisons using only a few genomes are not enough. We need more information about the moss genome to understand the evolution of mosses and early land plants. Not all the moss genomes are quite similar so that is why we need another moss genome. I propose to investigate the important features of Bryum argenteum. It is a cosmopolitan moss, has a very high desiccation tolerance and is heavy metal tolerant. We need to study the expression of the genes through RNA and the control of that expression through small RNA to understand how it acquired these characters and, in the meantime, we might resolve the question of land plant evolution.

Shaw, A. J. and D. L. Albright (1990). “Potential for the Evolution of Heavy Metal Tolerance in Bryum argenteum, a Moss. II. Generalized Tolerances among Diverse Populations.” 93(2): 187. 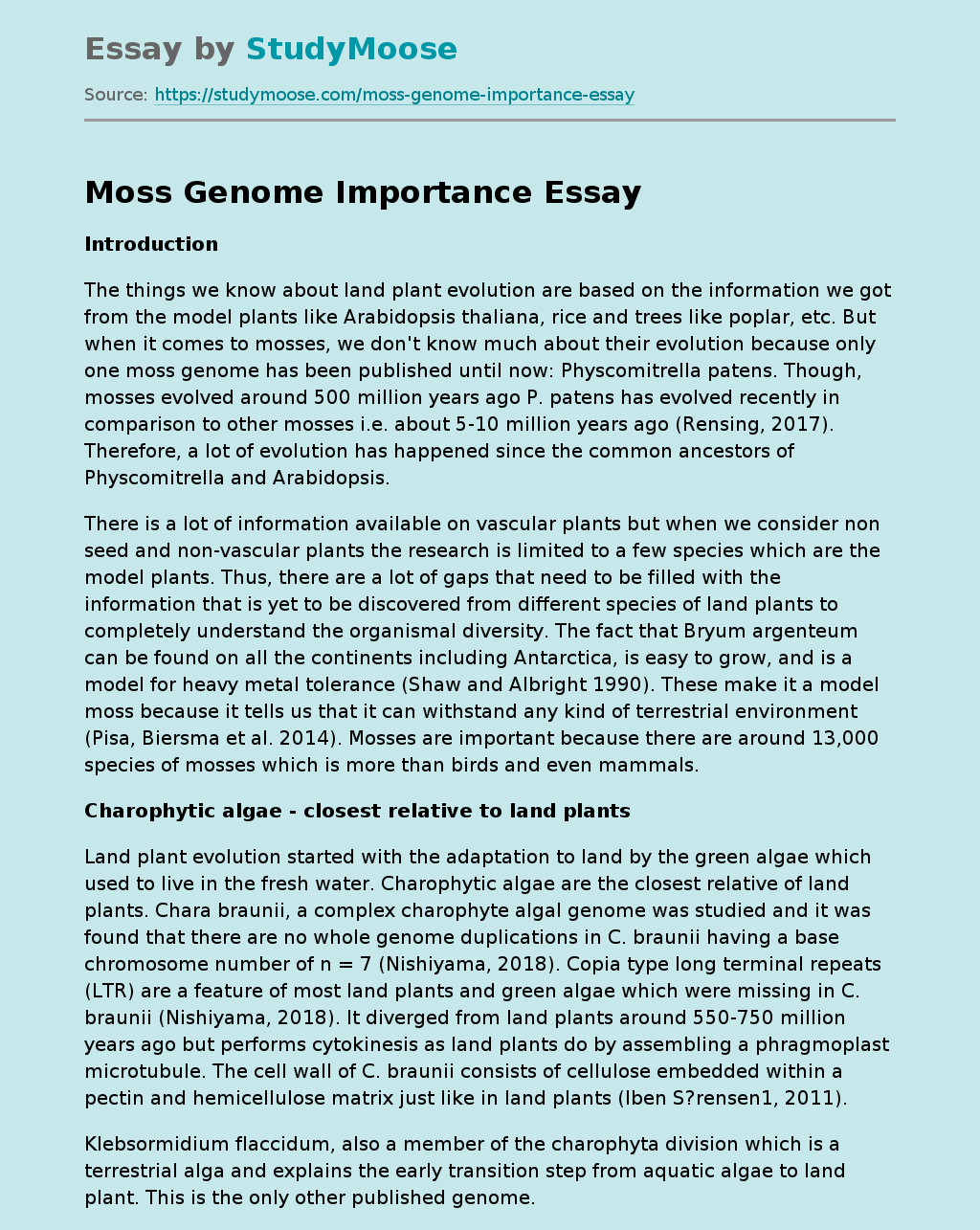