When exploring the concept of moral appropriateness in a text, one seeks out what could be considered as what would be right, judging the situation by hand. Generally speaking when seeking out the right in circumstances the decision comes from analyzing the physical and emotional outlooks on a character in text. In this case what is being disected in terms of moral appropriateness is one of the characters from the satirical novel by Joseph Heller; Catch-22.

Nately is young man of age who resides as a not commonly character in Catch-22.

Don't use plagiarized sources. Get your custom essay on
“ Moral Appropriateness in Novel “Catch-22” ”
Get custom paper
NEW! smart matching with writer

He is known for being someone who is sensitive and who comes from a wealthy family. According to Catch-22; “His nature was invariably gentle and polite” (Heller 248) and “ His childhood had been a pleasant, though disciplined one” (Heller 248). In terms of exploring moral appropriateness with this character, the entirety of Nately’s context revolves around another character. The whore or Nately’s whore is a prostitute from Rome that Nately falls in love with in Catch-22.

When analyzing the situations of Nately in Catch-22 , dissecting Nately’s background, and what his actions are in the novel we can conclude distinctions on what others or the readers might see as morally inappropriate. For example, Nately comes from a family of wealth yet has fallen in love with a prostitute. A prostitute in the eyes of society is looked upon lowly. This is because their profession involves committing intimate acts with strangers in exchange for money. Usually a woman who does this in the place of poverty.

Without knowing that Nately comes from a rich family, there would be no way in pointing out the moral inappropriateness between him and his whore. The appropriateness lies within their personal context that Heller has inputted in Catch-22.

It is not only the scandal between Nately and his whore that is morally inappropriate but what his intentions are revealed in Catch-22. After confessing his love to her with Yossarian and Arfy, Nately says that his intentions lie in the means of marrying the whore. The moral inappropriateness is what Nately believes to be morally appropriate. What Nately believes to be morally appropriate is to be together with the whore in terms of marriage. The character stresses out his defiance when other characters such as Arfy, opposed to his idea of being in love with the whore. In response to his statement, Arfy says “I can just imagine what your father and mother would say if they knew you were running around with filthy trollops like that one. Your father is very distinguished man, you know” (Heller 288). After Nately declares that he shall be marrying the whore as well Arfy responds with “Ho, ho.ho,ho,ho! Now you’re really talking stupid. Why you’re not even old enough to know what true love is” (Heller 288).

However there are instances in Catch-22 where readers will suggest Nately and his actions are more morally appropriate rather than inappropriate. For instance, after the whore had slept for eighteen hours, satirically it was that that made her fall in love with Nately. It is satirically in a sense that after longing for the whore to love him, it only took her sleeping for while to fall in love with Nately. Furthermore, Nately felt authority over her and the whore’s kid sister, leading to him developing a demanding side over the whore in Catch-22. “Get dressed” (Heller 356),”Because I don’t want them to see you without any clothes on” (Heller 356) are things that he ordered the whore to do. When the whore questioned him, his response was “Because I say so!” (Heller 356). Readers would analyze his behavior to be morally inappropriate. This is due to the fact that he is forcing her to do things out of her will only because she has fallen in love with him. It is suggesting that her returning her love gives him the right to show authority over her. Generally, others would suggest that this shouldn’t be the case and that the whore should be free to do as she pleases. On another hand, what Nately demanded of her wasn’t to suit his personal interest but rather, he was configuring her image. When he tells her to put her clothes on he says this because he does not want other men to see her in a vulnerable state that would otherwise be

inappropriate. For instance, if he didn’t tell her to cover up then the whore would continue to go her way. That way being the image of a whore. However, when it comes to moral appropriateness, one has to think that what would be best is if neither character acted upon their actions. Nately needn’t tell his whore what to do out of his will because he should not have authority over another human without their consent. The whore should not continue to act scandalously otherwise her relationship with Nately would be unbalanced in terms of class.

The reasoning behind Nataly’s actions are simple enough. He grows authoritative with the whore because he does not want her to be seen in the same way she is seen by him in the eyes of other men. He wishes to marry her because he loves her. Although despite the drastically different characteristic he develops, it can be be easily justified if one focuses on the whore’s background more than his. Nataly’s actions can be justified good in the sense that after the whore falls in love with him, he suggests that “They made a wonderful family group, he decided” (Heller 356). In reference of the whores sister he thought; “The little girl would go to college when she was old enough, to Smith or Radcliffe or Bryn Mawr—he would see to that” (Heller 356).

Overall, these actions make create a balance with this character. On one hand, Nately, like any other person contains flaws that may contribute to their moral appropriateness and then others will lean forward to inappropriateness. In this case, Nately’s ideas and what he believes to be right in overall can be considered good. To validate this statement, further into the satirical text it is discovered that Nately wishes to obtain more missions, stating in the process that “I don’t want to go home until I can take her back with me” (Heller 368). Following these events it is later found that Nately has died while in another mission and it was caused by Dobbs.

That being said, going back to when Nately desired to have more missions in order to be with the whore, Yossarian questioned; “She means that much to you?” (Heller 369). Nately agreed and responded with “I might never see her again” (Heller 369). What is considered to be right by Nately could not just be seen morally wrong in the eyes of the reader but other characters he interacts with. Yossarian whom is another character from Catch-22 plainly opposes to what Nately believes in. In Nately’s case it would be morally appropriate, which is to engage in more missions.

Catch-22 references ‘For the first time in his life, Yossarian prayed. He got down on his knees and prayed to Nately not to volunteer to fly more than seventy missions after Chief White Halfoat did die of pneumonia in the hospital and Nately had applied for his job” (Heller 368). The negative outlook Yossarian has on Natley’s beliefs can have readers on the same terms. Morally speaking, Nately’s death can not be justified as good in any way. Although one can draw emotional pity from the event, they can also draw the conclusion that Nately did wrong in applying himself for more missions. Why he did wrong in applying for more missions mainly revolves around the fact that by doing this he died in the process. His death could have been avoidable but it all relied on Nately to realize this.

Nately could have realized his mistake by simply taking Yossarian’s advice in consideration. Others could argue that what Nately did was morally right. The idea that what Nately did was morally right can be argued because he went forward with these missions for a good cause. The good cause being that he did not want to leave the whore and her kid sister alone and wanted to take them with him. Although he did suffer death in the end, there is no other motive that can oppose to the good moral of the circumstances other them his death.

The idea of what is morally appropriate and what is not comes in the hands of what most individuals believe, or majority. Often many may see certain actions as the right thing to do while others that are not majority will think the opposite. In this case, while exploring the context of Nately, it can be concluded that this character is specifically drawn to moral appropriateness 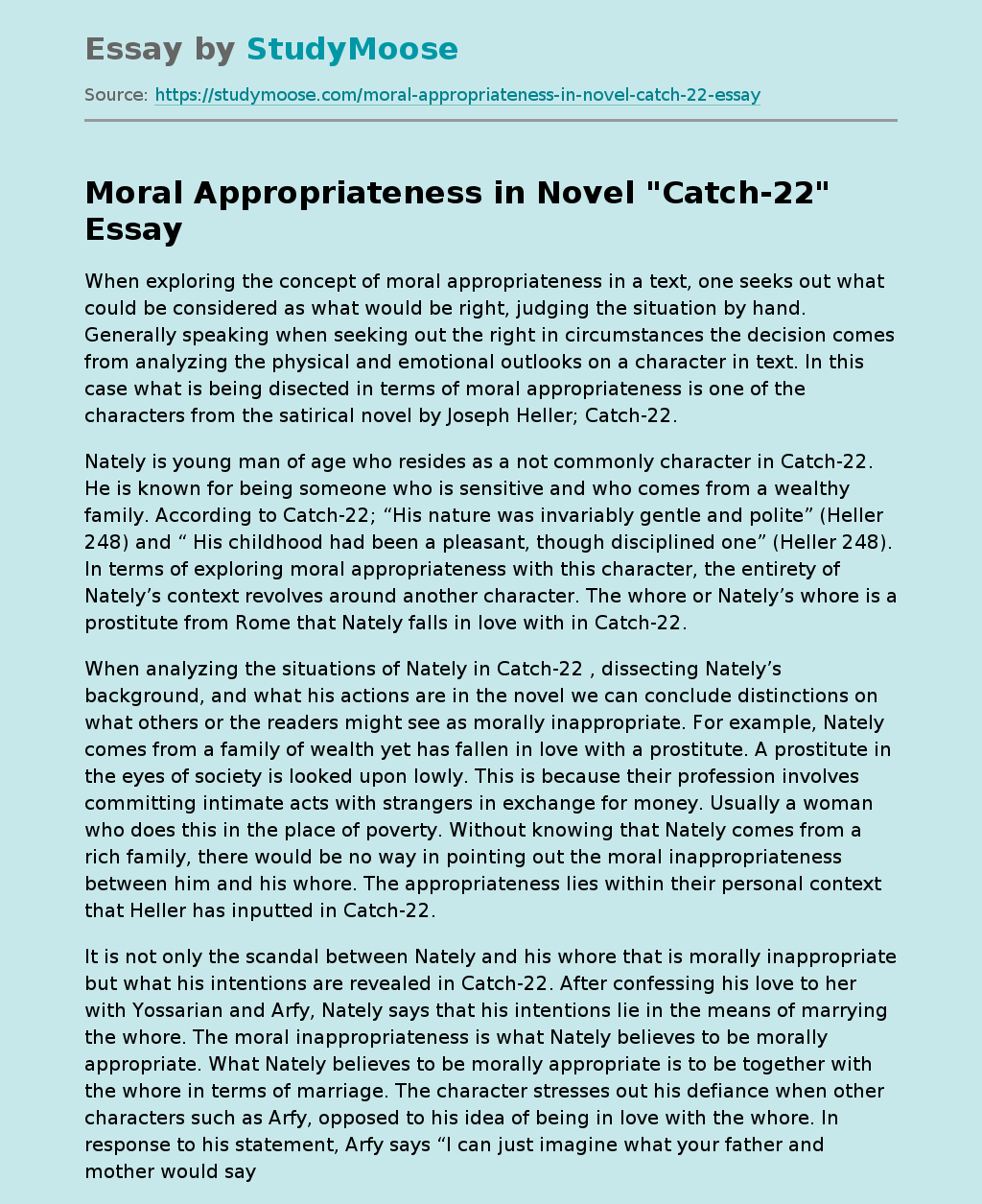