Catch 22, written by Joseph Heller, is the funniest english book I have ever read though I don’t really read books too frequently. In this book, as far as I read, most chapters are named after one of the characters’ name and, sometimes, events, and those chapters will be mainly about the that certain character or event. The events in the chapters were written in a non-chronological order, so it is a little difficult to understand. And there are way too many characters in the story, so sometimes I will have to go back and review who he is or what he did in the past.

Don't use plagiarized sources. Get your custom essay on
“ Analysis “Catch 22” by Joseph Heller ”
Get custom paper
NEW! smart matching with writer

The novel takes place at Pianosa, a tiny Italian island near Rome, at the end of the Second World War. Unlike most novels that describe how heroic and positive their main characters are, the author of Catch 22 set the main character Yossarian in a completely opposite way.

The main character Yossarian is a bombardier in the air force in the world war two that is not willing to risk his own life to save others, he thinks everyone in the battlefield is crazy and trying to kill him.

Yossarian’s only goal is to escape from the war, and the only “legal” way to get out of that place is to complete a certain amount of flight mission or prove himself mentally ill. Whenever Yossarian or someone else almost reach the number, Cathcart, the Colonel in charge of the group, increases the number of missions the men must fly to complete their service.

On the other hand, people that is mentally ill can be removed from the duty, but only mentally normal people is able to make a formal request, so this cannot work either, this rule is known as the “Catch 22.” This book can be divided into several parts, introducing characters, the mission of Bologna, and the last part that focus more on Yossarian himself. There is also a part that tells how Milo make profit through his M & M Enterprises by selling foods. In the beginning of the story, Yossarian is in the hospital claiming to have some problem in his liver, and the doctor cannot proof that he is well cured, so Yossarian can stay in the hospital in order to stay away from the war.

All patients in the hospital are required to check the letters, so Yossarian starts changing and deleting words base on his own rule. Then the narrator continues to introduce the other characters, including including Orr, Yossarian’s roommate that always crashes his plane on combat missions but never died; Clevinger, a member of Yossarian’s squadron that always argue with Yossarian; Havermeyer, who loves flying dangerous missions and shooting rats at night; Nately, son of a wealthy businessman, who is in love with a Roman prostitute; Hungry Joe, a former photographer that always take picture about naked women; and etc….. Yossarian asks Doc Daneeka, the group’s medic, if he can be grounded from flying another mission because he is insane. But Doc Daneeka refuses his request by introducing the paradoxical “Catch 22” I mentioned earlier. Later on, Cathcart signs the men for a dangerous mission over Bologna, and after that mission, Yossarian undergoes a internal change, from avoiding missions to feeling unfair about the raise amount of required missions, because his friend starts to die. He believes that those flying missions is not necessary because the war is almost over. Dunbar, another friend of Yossarian, is “disappeared” by the military because he is too rebellious and complain too much about the missions are useless and meaningless. Nately, Havermeyer, and Dobbs are killed on the same mission. Orr crashes his plane floats away on a raft. McWatt, buzzing the camp as usual, kills Kid Sampson by accident.

After visiting to Rome, Yossarian says he will no longer fly. Cathcart offers him two options – go to prison, or go home. While he is hesitating about the deal, the chaplain then said it will be unfair to the others, so he is looking for another way that everyone can escape Catch 22 together instead. After some conversation with the chaplain and major Danby, a military official, he suddenly find out that the reason why Orr crashes his plane in every mission is that he is practicing crashing his plane so he has the opportunity to escape to Sweden by floating on a raft and didn’t die in the flying mission. So Yossarian decides to do the same thing Orr did, and this is how the story ends. There are a lot of theme in this novel, and you can see it easily from the characters’ behavior and conversation.For example, the absurdity of war- Cathcart’s continuously missions leads to dangerous flights over unnecessary targets; personal integrity- struggle between himself or the military; and greed, which is obviously represent by Milo Minderbinder. When I first read this book, I was a little confused because of its timeline, and many of the events in the book is illustrate repeatedly in different people’s point of view, so it’s not easy to understand without reading it second time.

I enjoy reading this story because, unlike other serious warfare novels, there are many jokes and hilarious conversation and situation in the story, such as the moment when Dunbar yelling at the nurse, ‘Washington Irving’ signatures, the allies bomb their own bridge, and, my favorite in conversation in the book(chapter 41), “Where were you born?’ ‘On a battlefield,’ Yossarian answered. ‘No, no. In what state were you born?’ ‘In a state of innocence.” I enjoy reading books like Catch 22 that brings out many hidden message and themes in a funny and interesting way, but I still prefer reading detective novels. 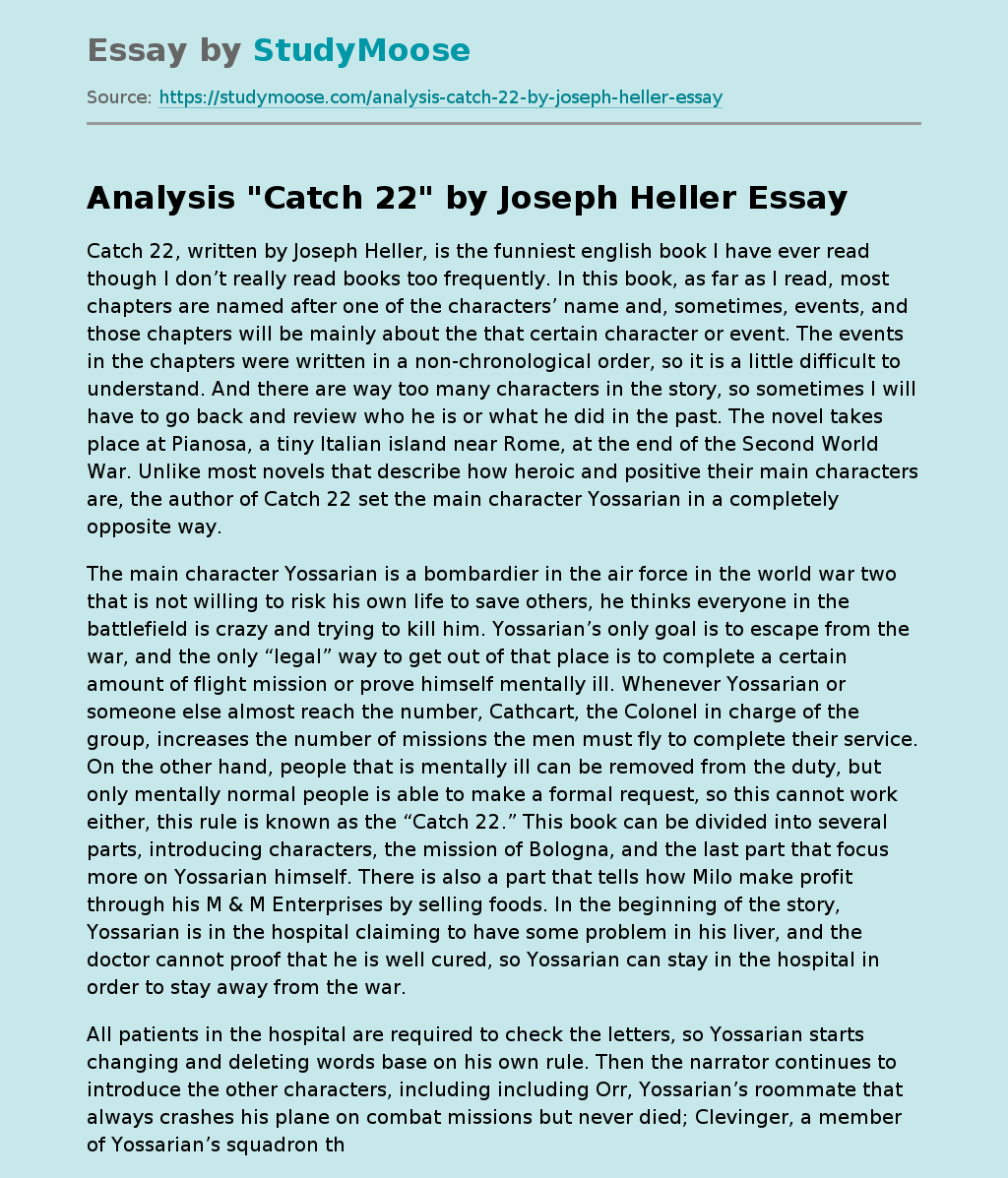