The novel Catch-22 by Joseph Heller is a dark comedy that takes place in World War II Italy set largely within a military base on top of the island of Pianosa with many antics also occurring in the city of Rome. The plot follows the protagonist Captain John Yossarian and his ragtag band of comrades including the reputable Chaplain Albert Tappman as they try to make it through the war without getting court-marshalled or worse killed.

John Yossarian is the primary protagonist of Catch-22.

Don't use plagiarized sources. Get your custom essay on
“ Book Report: Catch-22  ”
Get custom paper
NEW! smart matching with writer

Several companions of his in the squadron refer to him as “Yo-Yo”. A large majority of the story is told from his point of view or with him being heavily involved in the action.

Physically Yossarian can be characterized as your average man. He has black hair and as an Assyrian man his skin complexion can be described as light. He is no athlete but as a member of the armed forces it can be assumed that he is at the very least in good shape.

After getting shot in the leg on bombing run his gait became staggered for a stretch of the book but for much of the novel he strides with composure. He spends most of the book in army uniform but his sense in fashion could be derived from when he attempted to go nude while accepting his medal for bravery.

It is true that by looking at him you would assume he is no more than the ordinary army man perhaps even a hero; however, a simple conversation with the man would show to you that he is far more paranoid and cowardly then what appearances seem to show.

He is very frustrated with the system and the Catch-22 that enables it because from his perspective its continually trying to kill him. Yossarian is constantly complaining to whoever is willing to listen that “Every one of them” was trying to murder him. While confusing at first to the reader he explains that “Them” encapsulates all the people shooting him out of the air who don’t even know him and all the military personal sending him up in the first place. Yossarian is not your typical war story hero; he has no interest in fighting for his country all he wants to do is survive. He was not always like this; he too was once a young hopeful drafty ready for war, but it is at the end of the book that we learn what occurs on his first mission and sets him down this path.

“He gazed down despondently at the grim secret Snowden had spilled all over the messy floor. It was easy to read the message in his entrails. Man was matter, that was Snowden’s secret. Drop him out a window he’ll fall. Set fire to him and he’ll burn. Bury him and he’ll rot, like other kinds of garbage.” (p.440) This understanding about the fragility of life makes Yossarian who he is.

While Yossarian by most standards is quite eccentric, in comparison to the people he has relationships with in the 256th Squadron and with those in Rome he may even appear quite tame. His best friends include: downtrodden Dunbar, the shy chaplain, neurotic Hungry Joe, the prankster McWatt and simple-minded Orr. Through out the course of the story we see nearly all of these people either die or disappear much to the grief of Yossarian. His relationship with commanding officers Captain Black and Colonel Cathcart is one where both parties find them selves at odds with each other until at the end of the book when they try to strike a deal where Yossarian must be “friends with them”.

Yossarian is a simple man who hates war and is just trying to survive or in his words “Die trying”.

Albert Taylor Tappman is an important character in the story. Most people in the squadron simply refer to him as the Chaplain. A chapter of the book is shown from his perspective and he has heavy involvement in significant portions of other parts of the book.

The Chaplain is a man of 32 years and as a passive Chaplain in his 30’s it can be assumed that he probably has a pretty scrawny build and isn’t in the best shape. He is described as having tan hair, brown eyes, and a narrow pale face. Despite being a Chaplain, he still wears military attire but seeing as he is a man of God, he still sports a cross. His physical appearance can be summed up as being very unassertive.

The Chaplains looks are not in the slightest bit deceiving. He is timid, passive, and terrified of authority. He constantly worries for the well-being of his family and friends seldom finding comfort when conversing with Yossarian. In fact, outside of his conversations with Yossarian he has little to no exchanges with the squadron as a whole. However, nearing the end of the story, we see the Chaplain gain a newfound confidence spurred from a need to help his friends; even announcing that he will punch Colonel Cathcart (his superior) in the face. Nevertheless, through out the story his kind, gentle manner and feelings towards his friends never change.

The Chaplain is an Anabaptist minister. He is supposed to practice his profession in the Squadron by bringing the men together for prayer but is stopped due to his superiors not allowing him to continue with his service simply because they didn’t like him. His sole assistant is an atheist who constantly belittles and ridicules him even trying to get him court-martialled. He had enjoyed his time with Yossarian and his friends in the staff club but is once again kicked out by his superiors. He has little contact with his wife and children, but they are very important to him.

The Chaplain is a critical part of the story as a distinct character. His relatable lamblike demeaner that develops over the story makes him and interesting and compelling character.

Both Yossarian and the Chaplain are quintennial to plot; The novel opens with the line “The first time Yossarian saw the chaplain he fell madly in love with him.” It is here at the start of the story that the reader is brought into a hospital on the island of Pianosa and is introduced to Yossarian and several other key Characters such as the previously stated chaplain and one of Yossarian’s best friends Dunbar. Yossarian is in because he has been faking a liver ailment for, he finds the hospital to be a place of refuge. We also meet the extremely friendly Texan whose pleasant demeanor prevents anyone from hiding out in the ward because absolutely no one can stand him.

When Yossarian is forced out of the hospital by the Texan he returns to his tent with his roommate Orr and an unknown dead man. Orr drives Yossarian crazy as he works on his painstakingly meticulous task and continues to annoy him by telling him a bewildering story about why he put chestnut seeds in his cheeks as a child. This is where the reader is introduced to the main nemesis of the novel. Yossarian has completed the required missions for his tour of duty but the colonel keeps increasing the amount that is needed to finish creating the main obstacle in Yossirain’s path.

Yossarian trying to find a way out asks Doc Daneeka why someone who is mentally unfit like Orr can’t get grounded on the cause that they are not sane. This is where the reader is first introduced to the Catch 22. Orr can be grounded if he is crazy but if he asks to be grounded like any sane person would than it can be reasoned that he is not crazy and shouldn’t be grounded. This is also where we get a flashback for when Yossarian accidentally kills someone by asking to around again on a bombing run.

A dangerous mission to fly over Bologna is put in place but Yossarian has no desire to fly it. In a stroke of genius, he simply goes to the war room and moves a line on the map to make it look like the allies have already captured the city and delays the bombing runs for quite a long period of time.

The story is not told in complete chronological order so for a couple chapters we are pulled out of the story to learn about all of Yossarian’s hospital stays. Here Yossarian announces that he will return every year at thanksgiving a claim he breaks when he engages in a discussion on the subject of god with Lieutenant Scheisskopf’s wife next Thanksgiving.

Around here we learn that Milo Minderbinder’s business is flourishing and is very profitable. What started as a way to get food for the mess hall has turned into a full-fledged massive enterprise with ridiculous outreach and connections with Milo himself being the may Mayor of Palermo, Vice-Shah of Oran, the Caliph of Baghdad, and the Sheik of Araby. Everything nearly comes crashing down when he makes deals with the Germans complicating life for those in the squadron.

McWatt one of Yossarian friends likes to terrorize him by flying his plane right over head. He proceeds to do this once again over a beach where Yossarian is laying but this is when things to grim. He is flying very close to the ground and cuts kid Sampson in half while flying over the water. McWatt out of guilt crashes into the mountain and is killed. Doc Daneeka was supposedly on the plane so the military followed standard procedure to make sure his loved ones were notified, and a replacement was found. However, Doc Daneeka was not actually dead but no one believed him when he showed up so he was basically as good as dead.

The nurse that Yossarian was harassing early Nurse Duckett has decided to marry a doctor but has an affair with Yossarian. While Yossarian is in the hospital she gives him some terrible news. His best friends Dunbar had been disappeared by the government and is never seen again throughout the rest of the story.

Now Yossarian has almost no one left with perhaps the chaplain being his only remaining friend. We get the most important flashback throughout the story about Snowden’s death that set Yossarian down this path. However, a glimmer of hope shines in Yossarian’s eye as he learns that Orr is actually alive and well in Sweden and that all of his crash landings were actually him preparing for his final crash were, he would escape and sail away from the threat of combat. This gives Yossarian hope and he announces that he will run away just as Orr had. This is the end of Catch-22. 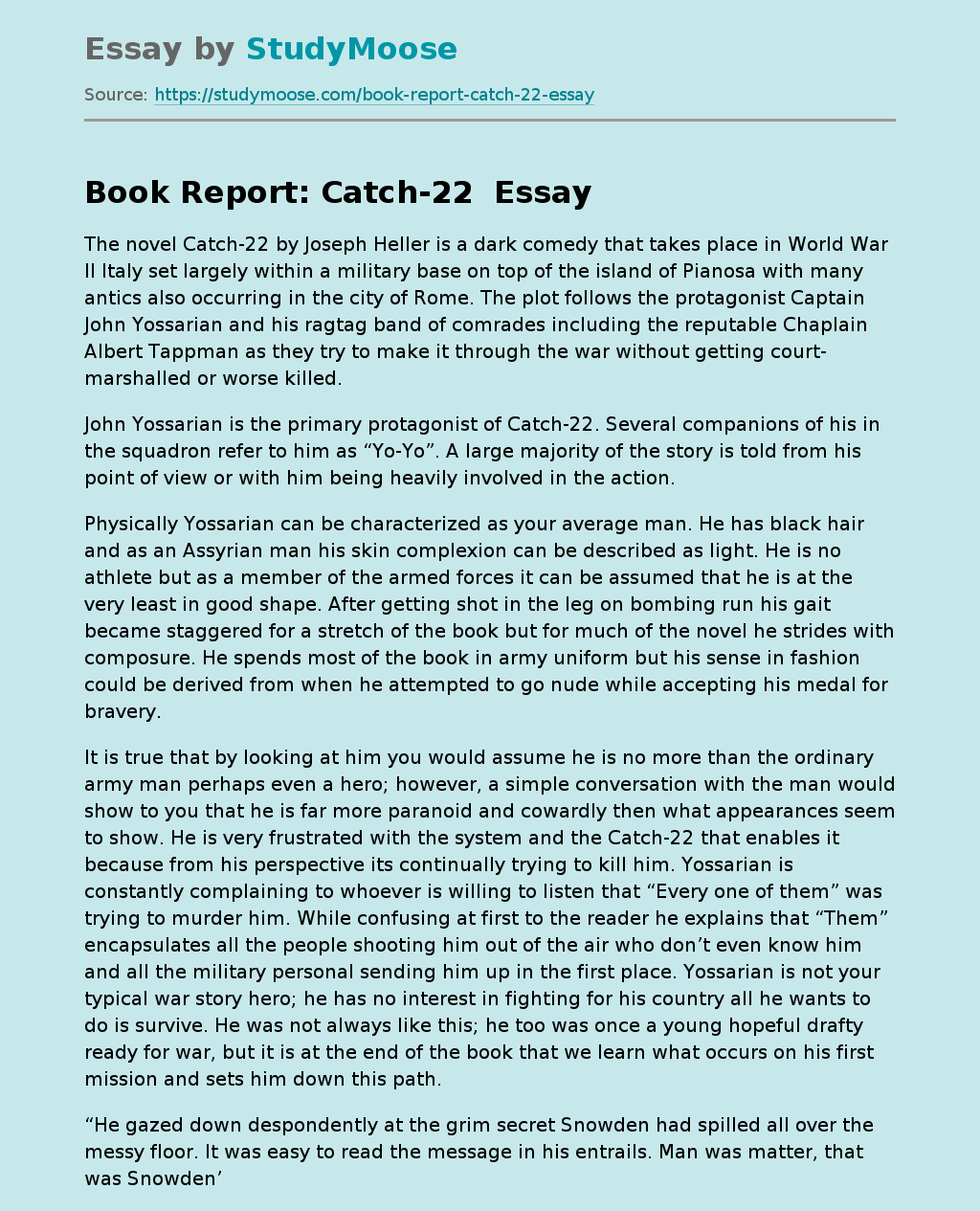