Modernization theory is a theory that explains the process of improvement from an older culture to the newest one as well as explains the changing ways of communication and media use in traditional and postmodern societies. The theory takes into consideration factors from a certain place with the assumption that traditional places can be developed to the most recent manners. Modernization theory does not only stress there to be a change but also response to that change. It also looks at internal dynamic while referring to social and cultural structures and the adaptation of new technologies.

Don't use plagiarized sources.
Get Your Custom Essay on Modernization Theory Just from $13,9/Page

So essentially, what is modernization and what does this theory consist of? To put it simply, modernization is the economic growth within societies. And the modernization theory believes that there are steps to success for every country. Modernization theory evolved in three different time periods. The first wave appeared between the 1950s and 1960s. Western cultures and styles of living were the main goals to reach along with culture, motivations and achievements.

Three variants that this first wave brought with them were one; economic developments in which mass media promote the global diffusion of many technical and social innovations that are essential to modernization, two; literacy and cultural developments allow for mas media to teach literacy and other essential skills and techniques and three; national identity development permits mass media to support national identities in new nations and attention to democratic policies.

The second wave of modernization theory is a part of the critical theory that was popular in the 1970s and 1980s. This did not support but instead it criticized the influence of Western modernization. Within this criticism exists another theory called media dependency theory where developing countries are assumed to be dependent on mass media in the core of the Western world. The third wave of modernization theory began to rise in the 1990s. It is here that the modernization begins to be more neutral, neither in favor nor against Western modernization. Instead, it tries to expose the contradictions in the modernization process and simply help explain the consequences of modern living in contemporary society. The theory of modernization has its roots in the ideas of some scholars they produced different theories about the origins, characters, and future path of modern industrial society. Modernization theory is only optimistic and full of contradictions. It is important to understand the history of a situation so a more realist approach can be taken to solve it. Now that the history is understood, it is possible to work with it and correct its faults so that the world will not be stuck anymore. The contemporary debate over modernization theory has in many respects circled back to researchers agendas.

Alongside endless empirical studies of the correlation between wealth and democracy, scholars have tried to untangle precisely how and why economic and political developments are related. During the Cold War era, there were three successful theories of global evolution at the beginning of the twenty-first century. The Marxist school that compared modernization improvements with promotion of imperialism and social class exploitation has transformed into a larger liberal program, appealing to conflict against the United States and its limited allies as an instrument for more just economic distribution and more checks in global political expansion.

The target of globalization more clearly identifies the problem of an enforced overseas model reducing cultural diversity and self-government; raising the profile of nationalism over the old subject of class struggle. It is not hard to understand why the hegemonic globalization school may be less outspoken, considering the fact that the meaning of its warnings of threats that can only be addressed in a world prepared under clear leadership and newly accommodated to containing political development that allows security dangers to progress and grow. Its neoconservative message calls for imposing a single model, more than comparing alternative approaches of nations and regions while accepting the benefits of diversity.

Qualified studies done by multilateral globalization school show that modernization theory accepts that the merge is a long-term progression that must remain incomplete as civilizations find consolation in what distinguishes them. The fast pace of technological changes help accelerate integration, and there will be risk of increased interdependence and exposure that will only require more security collaboration. Yet the driving forces of the global system will remain states competing to gain an advantage in boosting their economies and national power. In the context of growing world integration, states will still be in competition to capitalize on modernization and shape the global system.

Modernization theory predicts that strong economic growth raises homicide rate as it disrupts traditional modes of social organization and control. The same applies to higher levels of income, at least up to a certain point. It is only after a country has successfully developed and has reached a new more of socio-economic organization and non-traditional social reforms of control that crime rates can be expected to decline again – if not with the respect to property crime, then at least as concerns violent crime. This is compatible with modernization theory based on Durkheim n that moral individualism need not lead to higher rates of violence crimes as so-called organic solidarity will eventually substitute for traditional social control and constraints on individual behavior.

Modernization theory is good for the greater of all but because it is a general theory its actions can be biased. Even with its contemporary works, it continues being a work in progress to make it better than what it is. Living in the twenty-first century only means more and faster technology, programs, data and many other things that are out there that certain places, countries and nations have possibly yet to discover or be aware of. Possibly, by giving that extra hand and helping one another as a civilization, this good for the greater of all can simply be greatness for all.

Modernization Theory. (2016, May 07). Retrieved from https://studymoose.com/modernization-theory-essay 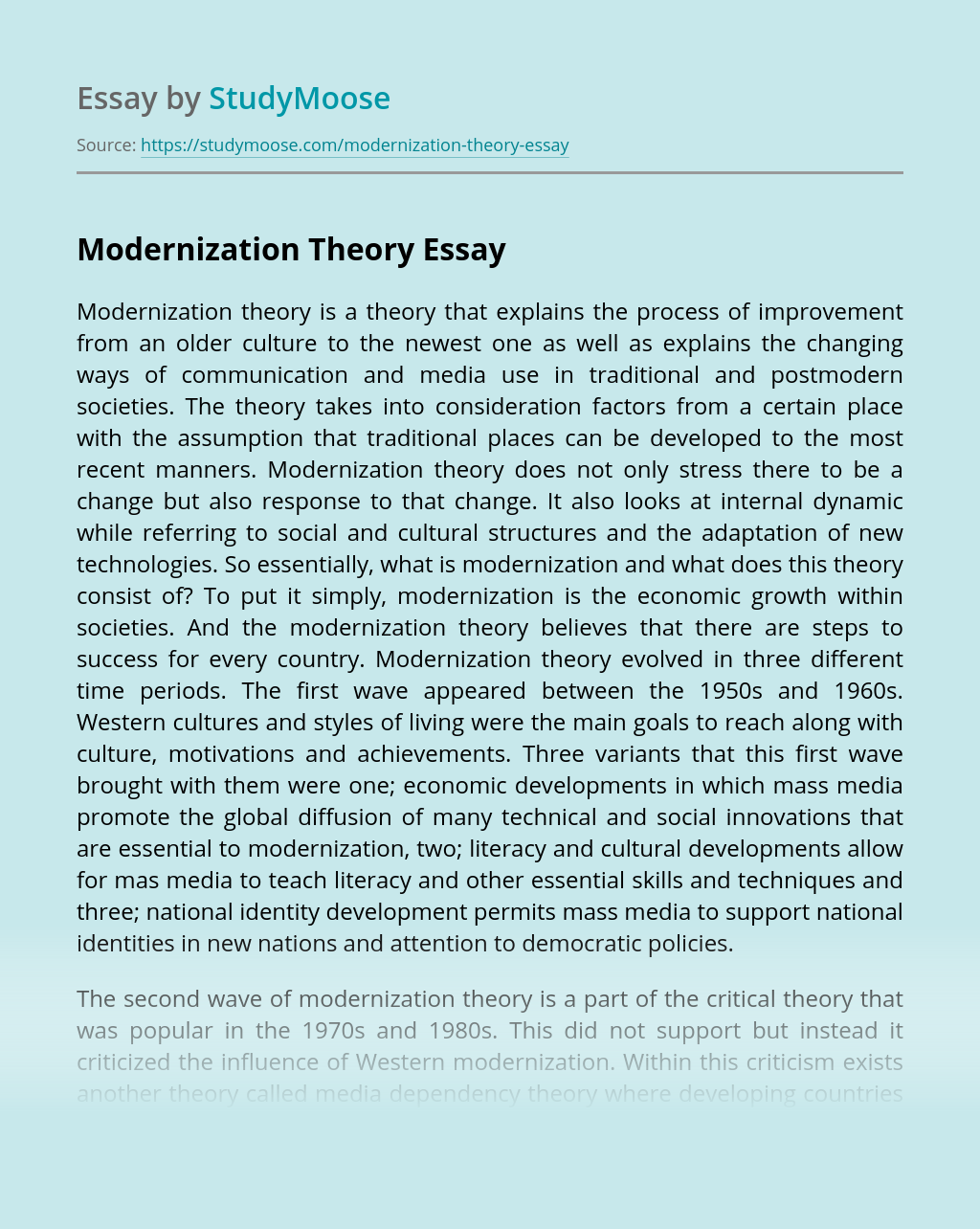 The objective of punishment in the criminal justice system it to enforce a particular penalty on a person who is in violation of the law; such enforcement should have an effect so great that it will deter that person from continuing to violate the law and prevent other offenses (Foster, 2006). Punishment is based on... VIEW ESSAY

Gun control has become more and more of a hot-button topic in the United States, especially after events like the Sandy Hook shooting in 2012, when many people questioned the necessity of the second amendment in this day and age. Indeed, upholding the second amendment continues to be a difficult prospect when it does not... VIEW ESSAY

1. NAME TWO EXAMPLES OF CAPITAL CRIMES.- Murder of a police officer and sexual abuse of a minor. 2. NAME TWO EXAMPLES OF FEDERAL CRIMES – Possession of a controlled substances. 3. EXPLAIN THE DIFFERENCE BETWEEN JAILS AND PRISONS – Jail is a smaller facilities and have a certain sentences and been adjusted a bail... VIEW ESSAY

In the juvenile justice system believes in giving a juvenile a second chance, and protects their privacy. They also want to make sure they receive treatment and support services rather than just punishment. The juvenile system focuses more on their needs, and those goals are met with treatment and rehabilitation so they won’t become repeat... VIEW ESSAY

What are the central presumptions of biological theories of crime? How do such theories vary from other point of views that attempt to discuss the exact same phenomena? Biological Theories of Criminal Activity These theories are offered by modern criminologist who relates the interaction in between surrounding social and physical environments with biological influences and... VIEW ESSAY