This report has been prepared to cover a project requirement for Decision Management within the grounds of ‘New Developments in Management’ and in response to the following; “The past 15 years have seen a series of new developments within management accounting to meet the ever changing needs of the organisation in the light of rapidly changing technologies”.

The focus of this report will be on three relatively new developments including JIT (just in time), ABC (Activity Based Costing) and ToC (Theory of Constraints).

Don't use plagiarized sources.
Get Your Custom Essay on Modern Management Techniques Just from $13,9/Page

Each development will be defined and then illustrated, before being examined in context with Toyota Ltd. The illustrations will be in the form of diagrams and if necessary, numerically discussed in reference to Toyota Ltd with an example working.

The JIT method was first implemented in the early 1970’s at the time of the industrial revolution within Japanese Firms.

The Just In Time method is an inventory based management system with the objective of having the sufficient quantity of finished goods desired by the company at the required time; thus, effectively eliminating or in most cases significantly reducing the need for the costly storage of inventories.

JIT also requires a “continuous commitment to the pursuit of excellence in all phases in manufacturing systems, design and operations” (Collin Drury, Management and Cost Accounting 7th ED pp556).

This however, is only effective considering it does not negatively impact on customer supply. As well as this, JIT is most effective when implemented alongside what is know as Total Quality Management (TQM); whereby a company sets objectives to have zero errors and defects in every department of manufacture. An example of this can be observed with the methods by which Toyota inspects materials before and during the manufacture process; if a single fault is detected within a batch of materials/goods, the whole batch is rejected in order to reduce chances of any errors at a later stage within the manufacturing process. Ironically, occasions whereby hundreds of thousands of Toyota’s Hybrid motor-vehicles were recalled due to potentially fatal errors of the vehicles’ breaking systems, could well have been avoided with a better implemented Total Quality Management.

The aim of JIT is to achieve four main objectives, these are; •Elimination of Inventories – by receiving supplies needed just at the right time they are needed, the need for inventories is eliminated, thus, lowering cost of holding inventory. For example, instead of Toyota holding large amounts of inventories ready for the production line, they can arrange for delivery of only the relevant and required supplies just in time for the production process.

•100% Punctual Deliveries – by forming a good relationship with suppliers and agreeing for them to deliver goods on a punctual basis (such as suppliers for raw materials like metal/glass/leather for the production of Toyota products), the elimination of inventories objective can be achieved as well as meeting customer demands just in time.

•Elimination of Defects – The efficiency of this would mean the elimination of those costs that although not accounted for, may occur after production due to faulty materials used for production, for example. In order to eliminate them, Toyota could reject whole batches of materials that have the least fault contained (a stringent policy used by Marks & Spencer’s during supervision of purchased goods). Such demands in high quality can achieve the elimination of defects.

Activity Based Costing is a development of the early 1970s and 80s as a substitute for absorption based costing. This was because in the 1970s and 80s there had been a drastic on going change to the manufacturing industry due to the effects of the Industrial Revolution; therefore absorption costing was seen as an increasingly insufficient method of costing in terms of the quality of information it provided.

In practice, ABC identifies direct and indirect activities, and allocates the costs into ‘cost pools’, each of which have ‘cost drivers’, (cost drivers are any factors that have an effect on the amount of resources to be consumed by a particular activity). Once these cost drivers are identified, it is allocated a calculated rate, which is used in the calculation of the amount of cost to be charged to that output, depending on usage. The diagram below further explains the process of Activity Based Costing;

Identify the major indirect activities in the organisation

For each activity, group the budgeted costs together into a ‘cost pool’ For each activity, identify the cause of the costs (cost driver)
(Diagram source: AAT Level 4 ‘Managing Performance & Resources’ Janet Brammer Tutorial Textbook pp14.) From this, a few advantages and disadvantages of ABC are made clear;

•As compared with other costing methods such as absorption costing, ABC is more accurate, (for example, it utilizes unit cost rather than the total cost proving more accurate). •It is also a much less complicated and is therefore more understandable. •Allows for the easy identification of non-value added activities and waste, therefore can help in the elimination of the two.

•It is however much more time consuming due to the need to collect more data for calculations. •There are also costs that come with the implementation and the maintenance of ABC.  • The advantage of ABC making waste visible and therefore easily identifiable may cause de-motivation as most directors/managers would not want waste to be revealed to their bosses. 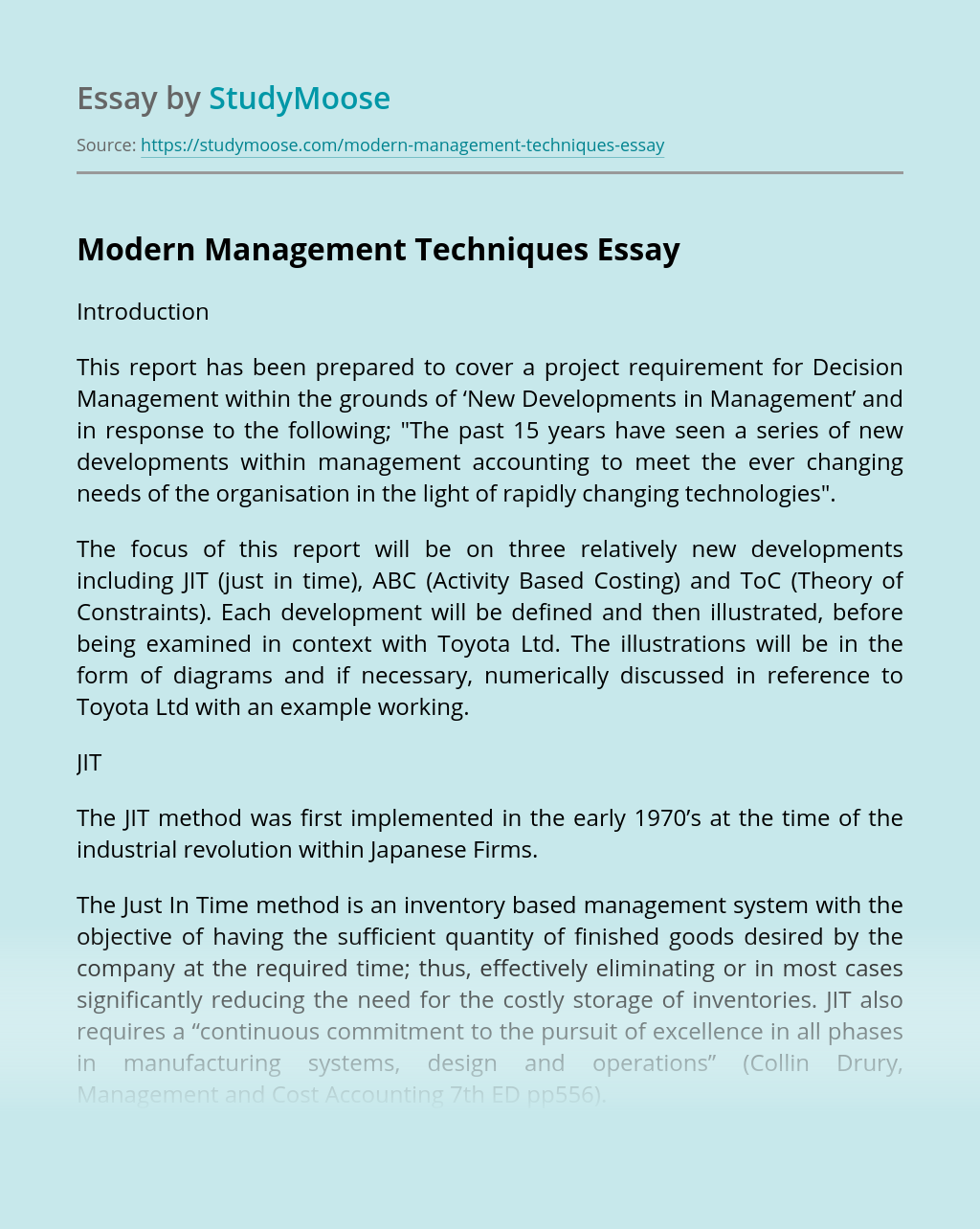 The Human Cost of an Illiterate Society

Précis: In “The Human Cost of an Illiterate Society”, Jonathan Kozol, a Harvard graduate, argues that illiteracy cause the loss of choice or freedom and leads to many problems. Kozol highlights his argument with examples of when illiteracy can be binding such as “Many illiterates cannot read the admonition on a pack of cigarettes. Neither...

After making some wise short-term investments at a race track, Chris Low had some additional cash to invest in a business. The most promising opportunity at the time was in building supplies, so Low bought a business that specialized in sales of one size of nail. The annual volume of nails was 2,000 kegs, and...

In broad sense, both the terms have the same meaning. Yet cost management seems to connote broader perspective. Cost control to an un-initiated may mean cutting down the incurrence of cost or expenditure every time or in every situation. In reality it is not always so. In many specific situations, many times, one has to...

Fill out the tables for each scenario and answer the question that follows. Use $7.25 as the minimum wage and remember that employees in the United States must be paid time-and-a-half (1.5 times the normal hourly rate) for each hour worked over 40 hours per week. Scenario 1. A team of three laborers in Mongolia...

Historical cost is a traditional method of recording assets and liabilities at their original or nominal value without making adjustments for inflation. It first came in evidence in Jun 1979 in a French project after numerous debates. The historical cost principle states that the asset should include all cost necessary to get the asset in...