A Model to Aspire to: The Mother of Modern Management

The Victorian Age, which refers to the times and events in Europe during the reign of Queen Victoria (1837-1901) of England has come to connote a particular standard of living and a certain status of women indicative of female servitude, subservience and oppression. Mary Ann Burki believes that literature provides a valuable means of understanding the lives of Victorian women, a means that cannot be attained in history books or encyclopedias.

(Burki, 1975) Women of that time were the product of the attitudes and feelings of the time, and the subject of this essay, Dr.

Don't use plagiarized sources. Get your custom essay on
“ A Model to Aspire to: The Mother of Modern Management ”
Get custom paper
NEW! smart matching with writer

Lillian Moller Gilbreth, was likewise, but she managed to achieve greatness despite Victorian age attitudes and obstacles. Although faced with the obstacles of living her day to day life as a faithful and obedient wife with a similar work ethic as that of a man but focused on the home, Lillian Moller Gilbreth managed to achieve a level of greatest that surpassed most of the women in her time.

Lillian Moller Gilbreth was born in Oakland California on May 24, 1878. In a time when it was common for women to be forced to aspire at nothing more than marriage, motherhood and becoming a governess, Dr. Gilbreth managed to become a prolific author, the recipient of many awards, a mother of 12 and the “mother of modern management,” (Carey and Gilbreth, 1948, 1963; Carey and Gilbreth, 1950) perhaps the first true American superwoman of note, (Maisel and Smart, 1997) a woman who successfully combined career and home life.

Unlike another notable woman who lived between 1850 and 1950, the miserly and hated Hetty (Howland Robinson) Green, “The Witch of Wall Street” (1835 – 1916) who parleyed a $10 million inheritance into over $100 million, mistreated her son, viewed her husband as a useless burden and cut him off, Lillian Gilbreth lived a happy married life, raised a large family and managed to achieve greatness sufficient to leave a significant legacy in two separate disciplines, psychology and engineering, for others to follow.

(Sullivan, 1995) During her life, Dr. Gilbreth advised Presidents from Herbert Hoover to Lyndon Baines Johnson. Background and Education: Lillian, the oldest of nine children, was born as Lillian Evelyn Moller to William and Annie Moller. Due to her mother’s poor health, Lillian’s education began when she was 9. She was a good student who enjoyed literature and music and traveled across the U. S. during her school years.

Despite his pride in her daughter, Lillian’s father, a prominent business who was influenced by the Victorian notions at the time regarding women, did not believe in higher education for women or that women should attend college. (Maisel and Smart, 1997) Although she ultimately made her mark in psychology, both her bachelor’s and master’s degree were in literature and her goal upon entering college was to teach English.

Lillian attended the University of California at Berkeley where she obtained a Bachelor’s of Art in 1900 and a Master’s of Art in 1902. Although she completed her requirements for a Ph. D. in literature at U. C. Berkeley, she did not receive the degree. When she received her BA in literature, she became the first woman to speak at a University of California commencement. Lillian met her future husband and business partner, Frank Bunker Gilbreth (1868 – 1924), in 1903 when she took a break from her studies to travel abroad.

At the time, Frank who was ten years Lillian’s senior was already developing motion-study techniques in an effort to eliminate wasted motions and increase productivity in his construction business. Frank and Lillian kept in touch by mail for ten months while she was in Europe and he proposed to her three weeks after her return. Subsequently, Frank, who never went to college, started a consulting business and Lillian worked tirelessly at his side as they began their study of scientific management principles together. They were married on October 19, 1904.

A Model to Aspire to: The Mother of Modern Management. (2017, May 18). Retrieved from https://studymoose.com/a-model-to-aspire-to-the-mother-of-modern-management-essay 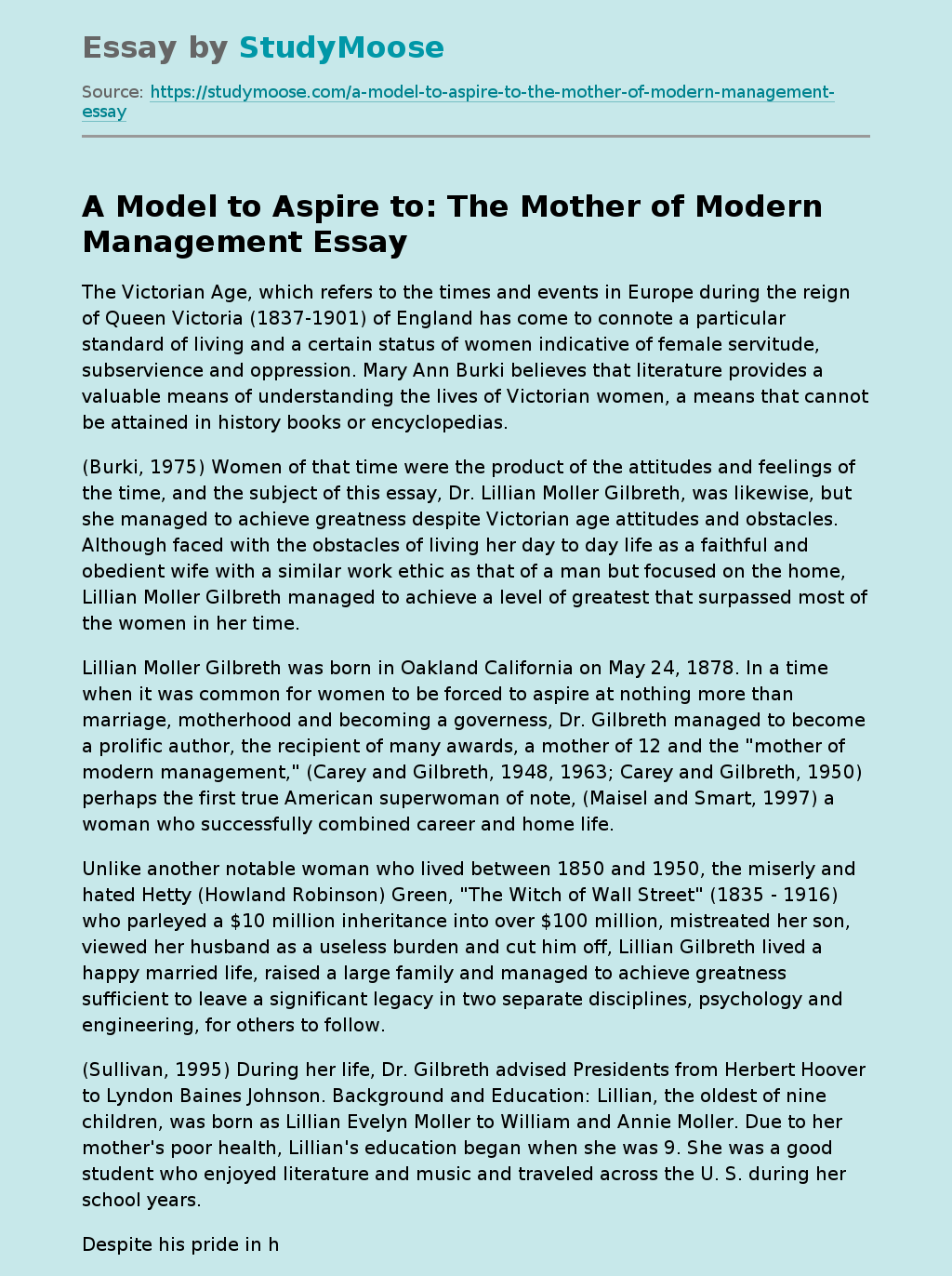