The m-commerce (MC) is an evolving, dynamic, unique and rapidly changing business opportunity with its own characteristics and concept (Lindsay, 2000). Many industry experts believe that m-commerce is a sleeping giant whose time has yet to come (Buhan, 2002). E-commerce benefited many organizations by reducing supplier cost and increasing profit. E-commerce is used to describe transactions that take place on-line where the buyer and seller are remote from each other (Andrews, 2001).

M-commerce definition is similar to e-commerce, but the term is usually applied to the emerging transaction activity in mobile network.

However, MC is not an extension of e-commerce and has a different infrastructure, equipment, and application than e-commerce (EC). The key differences between MC and EC are the technology they use, the nature of service they provide, and the business model they represent (Zhang, 2003). MC presents a cost effective and efficient way to provide seamless end-to-end connectivity and ubiquitous access in a market where demands on mobile Internet have grown rapidly (Mobilocity, 2000).

M-commerce predicted to generate billions of dollars in revenue in upcoming years (Dholakia, 2003). There are similarities between EC and MC. M-commerce and e-commerce are similar in that both are an economy systems where firms and consumers are aided by computers and networking technologies that enable a new market (Clarke, 2002). Mobile implies portability and refers to devices that can communicate, transact and inform by use of voice, text, data, and video (Gribbins, 2003).

These communication devices include smart phone, PDA, laptop, GPS and mobile payment (m-payment) systems. Trading, banking, shopping, bill payments, and other services are examples of these applications that consumers can use their mobile devices, from anywhere or any location without being connected to wires or fixed in a particular location (Eurescom, 2002).

Mobile devices especially cell phones are used not only by well-educated white-collar workers but also by poorly educated and even illiterate people. Therefore, the use and operation of it hould be as simple as possible. M-Commerce success is primarily based on consumers’ buy in, and therefore vendors’ primary focus is on the customer who will be using such a technologies (Vittel-Philippe, 2000). According to mobile business portal web site (2004), mobile application infrastructure enabler can be categories into four types: application gateway/platform providers (AGP), mobile application service providers (MASP), mobile Internet service providers (MISP) and mobile application enablers (MAE).

To deliver a mobile service to customers a mobile provider need to have a MC infrastructure ready. The above categories are interrelated pieces that make up a typical front-end mobile infrastructure. Lehner and Watson (2001) classified MC application into six categories. These include communication/interaction, entertainment, transaction, remote control and decision support, information and data access, and future application and services. Most mobile service providers provide many of the mentioned applications.

Despite availability and convenience of some recent advanced wireless technology like wi-fi, Bluetooth, and wimax, m-commerce would not be successful if the mobile application enablers and service providers are not available and if the infrastructure lack the security. A global survey in 2004 found that 61 percent of respondents said they would be using wireless devices as a universal payment tools (Wallage, 2003). However, making m-commerce successful requires not only the development of technology but also consumer attitudes toward m-commerce that is still little far to reach.

According to Ward (2003), Zawel, a Yankee Group analyst indicated that to fully implement a wireless wallet, three phase process would be required. The first one is a communication phase, in which we are beginning to move beyond it since large amount of population own and use mobile phone for voice, or the massage communication. The second phase is content, in which consumer buys software games, graphics, and news using the mobile devices. This is the phase that we are entering. The third phase according to Zawel is commerce phase, in which consumers are using mobile devices to purchase real goods in the physical world.

Once we enter this phase consumers will begin to accept MC fully. This is a challenging opportunity for mobile industry to convince consumers to leave their credit cards at home and let their mobile phones do the purchasing (Donegan, 2000). To make the wireless wallet a reality mobile industry requires an active investment of large and small stakeholders companies in wireless world. This includes content providers, mobile carriers and billing vendors or m-payment systems (Sadeh, 2002).

Mobile payment (m-payment) refers to payment method using m-commerce devices (May, 2001). Purchasing products and services using mobile phone in Europe and far-east market is more demanded than the rest of the world (Bradley, 2003). Japan is the leading country in m-commerce and since 1999 some component of Japans economy is dealt with it. M-commerce in Korea is not popular as Japan; however, Merrill Lynch survey in Korea found that, in the first six months of 2003, only 21. 2% of a half million subscribers had made any purchase using their handsets.

Interestingly, the large number of users (29. 2 percents) came from the 30-39 age groups (Battle, 2003). Eurotechnology (2005) indicated that four main challenges facing the m-payment world are security, convenience, availability and cost. Based on a research from the Korean consumer protection board, about 75% of complaints around the wireless Internet centered on price. Based on a survey in 2004 by Qpass, a provider of m-commerce software in the US and Europe, there are multiple factors that prevent European consumers from adapting m-commerce.

Complicity of European markets, including multiple currencies, languages, availability of many operating systems and mobile phone handset, and constrained of billing system are among factors. The survey further indicated that more than 82% of polled stated that they would be prepared to purchase goods via their mobile phone while only 26% had ever done so satisfactory. To examine the factors affecting the adoption process of new Information Communication Technology(ICTs), the Technology Acceptance Model[11] has been most widely cited in the literature. 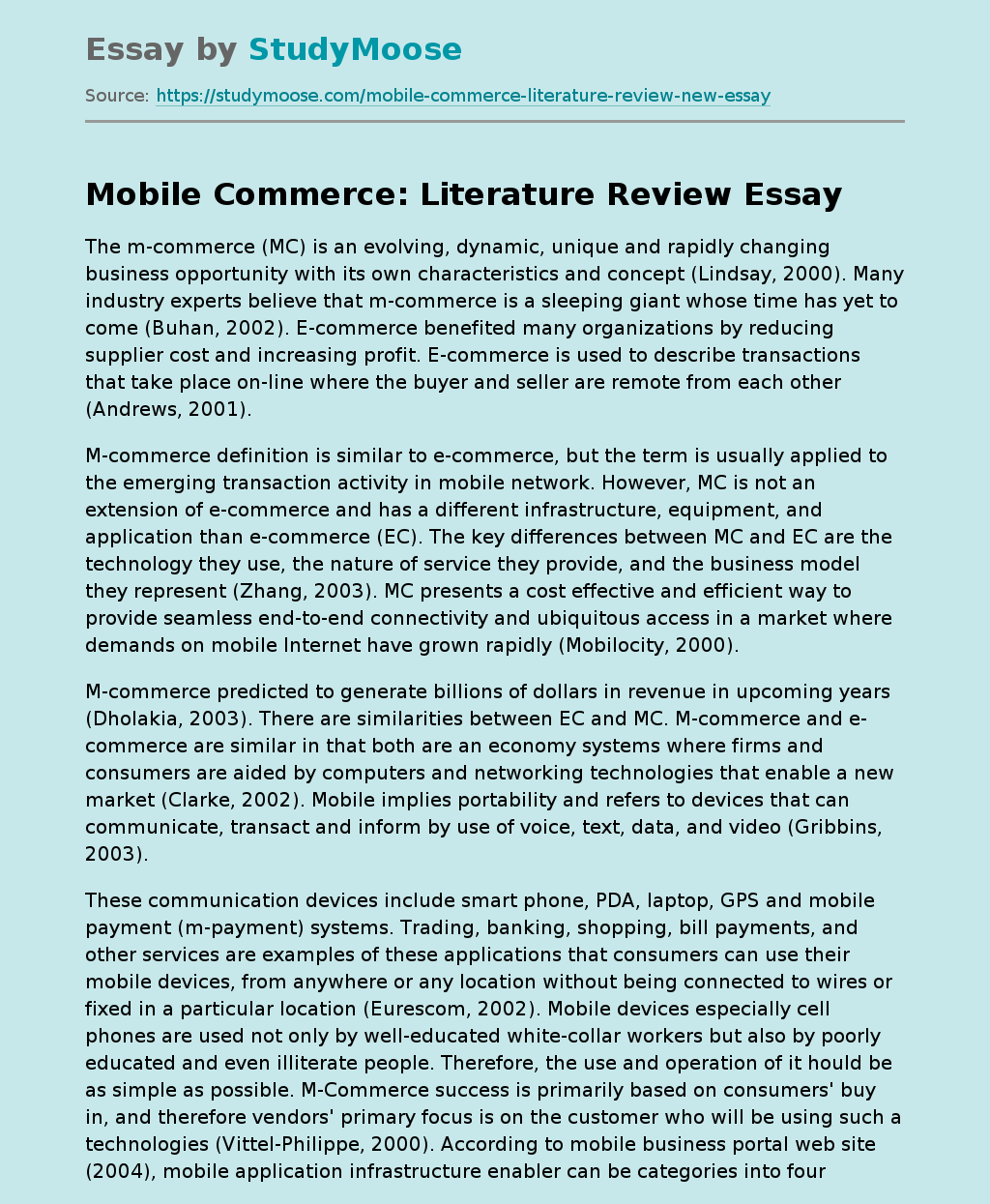