Mind and Body, Dualism vs Neuroscience

The idea of the human beings having a soul, spirit or mind has long been used; although religions started using it four thousand years ago for different reasons, some people that simply had a thirst for knowledge started seeking a true answer to this question not that long ago. Indeed, this question has seriously been thought about and logically questioned in the last 400 years starting with Descartes who thought that human beings do have an immaterial mind (mind and body dualism).

Don't use plagiarized sources. Get your custom essay on
“ Mind and Body, Dualism vs Neuroscience ”
Get custom paper
NEW! smart matching with writer

However, in the face of recent discoveries in neuroscience, it is not possible to maintain the theory of mind and body dualism as neuroscience has proved the brain to be the seat of mental faculties that are believed by dualist to come from the mind. First of all let us talk about mind body dualism in order to fully understand why it is now an obsolete theory. Dualists believe that the mind is non-physical and is separate from the brain which is physical.

Moreover, they see the brain to be simply the location of where the mind operates (where the mind interacts with the physical world).

Also, the body itself (brain included) is thought to have a different nature than that of the mind as one is physical and the other isn’t. On the other hand, we have physicalism. Physicalists think that everything that exists is physical and therefor what we call the mind does not exist as it is not physical. Descartes’ arguments for his mind and body dualism theory are however convincing if we ignore today’s recent discoveries and concentrate on philosophical reasoning; his first argument is that you can doubt everything in the material world but you cannot doubt that you are a thinking thing and exist.

Let me explain this further: one of Descartes’ experiments was called Meditations. In his meditations he started assuming (for the purpose of his experiment and not in reality) that there was an evil genius that would deceive him on everything he though was true. Therefor everything he wasn’t absolutely sure was true had to be considered as untrue because he did not want to build up logic or reasoning on a weak foundation.

In this way of thinking, he managed to doubt that the world, his hands, his body, and everything in the physical world was not true (because he would consider that the evil genius could make him think that he actually saw things that didn’t really exist). However, one thing could not be doubt, at this precise moment and since his birth, Descartes was thinking… This simple truth could not be doubted; he had a mind and was using it to think. Descartes’ concluded that because one could be doubt and the other not, mind and body were of different nature.

One of his more simple arguments, which is called the divisibility argument, is that as physical things such as bones, flesh, brain tissues and etc. occupy space in the physical world; thought-like things such as emotions, thoughts and the mind as a whole do not, and therefore are not physical. Moreover, Descartes has another argument called the conceivability argument which states that a human being can exists as a thinking things without his extended (physical) body existing (a mind or soul without a body) and that everything that can be conceived is logically possible.

Therefor if it is logically possible that X exist without Y, then X is not identical with Y. Now that a background of information on mind and body dualism has been set, let us see why and how recent discoveries in neuroscience make it impossible to maintain dualism as a theory. The way I see things, neuroscience has provided evidences that we do not need to suppose the existence of an immaterial mind to explain life and behavior of human beings and also has proven that a lot of the mental faculties dualist attributed to the mind are in fact attributed to the brain.

Contemporary neuroscience has greatly improved our understanding of the brain’s functioning; new imaging techniques enables scientists visualize the human brain in action and produces images that define the brain regions responsible for attention, memory, and emotion. The latter is the one of most interest in the present debate as emotions are believed to come from the mind. Emotional responses have been proved to be centralized in the limbic system. In this system we may find the amygdala and the hippocampus which are the primary areas managing emotions.

Then there is the element of decision making. Any dualist would attribute the element of decision making or free will to the mind, however neuroimaging allows us to detect some decisions up to 10 seconds before the actual decision is taken by the individual with monitoring of brain activity (CAT, MRI or PET scans for example). This questions dualism because as dualists consider the mind to be immaterial, a good question is raised: how can the mind (immaterial) which supposedly makes the decision, be observed and predicted with material tools?

Furthermore, a property of mind according to dualists is “behaviour”. Research studying victims of brain damage have found correlation between lost faculties or behavioural abnormalities and changes and localized damage in the brain. Phineas Gage is often the best example for this argument. Gage survived an iron rod that destroyed part of his left frontal lobe but suffered from severe personality change. It is noteworthy to specify that the personality change was big enough that his friend would no longer see him as Phineas Gage but as someone else.

Even though Descartes’ philosophical reasoning is worth considering, contemporary neuroscience shows on different levels that what is believed to be an immaterial mind is actually the physical brain. Following Descartes’ own logic, it is necessary to consider all doubtful knowledge as false and start building from information that are certain “in order to establish anything firm and lasting in sciences” (Descartes, Meditation I). This being said, contemporary neuroscience is based on experimental proofs while dualism is based on theoretical thinking. However, neuroscience has not convinced everyone, where do you stand?

Mind and Body, Dualism vs Neuroscience. (2016, Sep 17). Retrieved from https://studymoose.com/mind-and-body-dualism-vs-neuroscience-essay 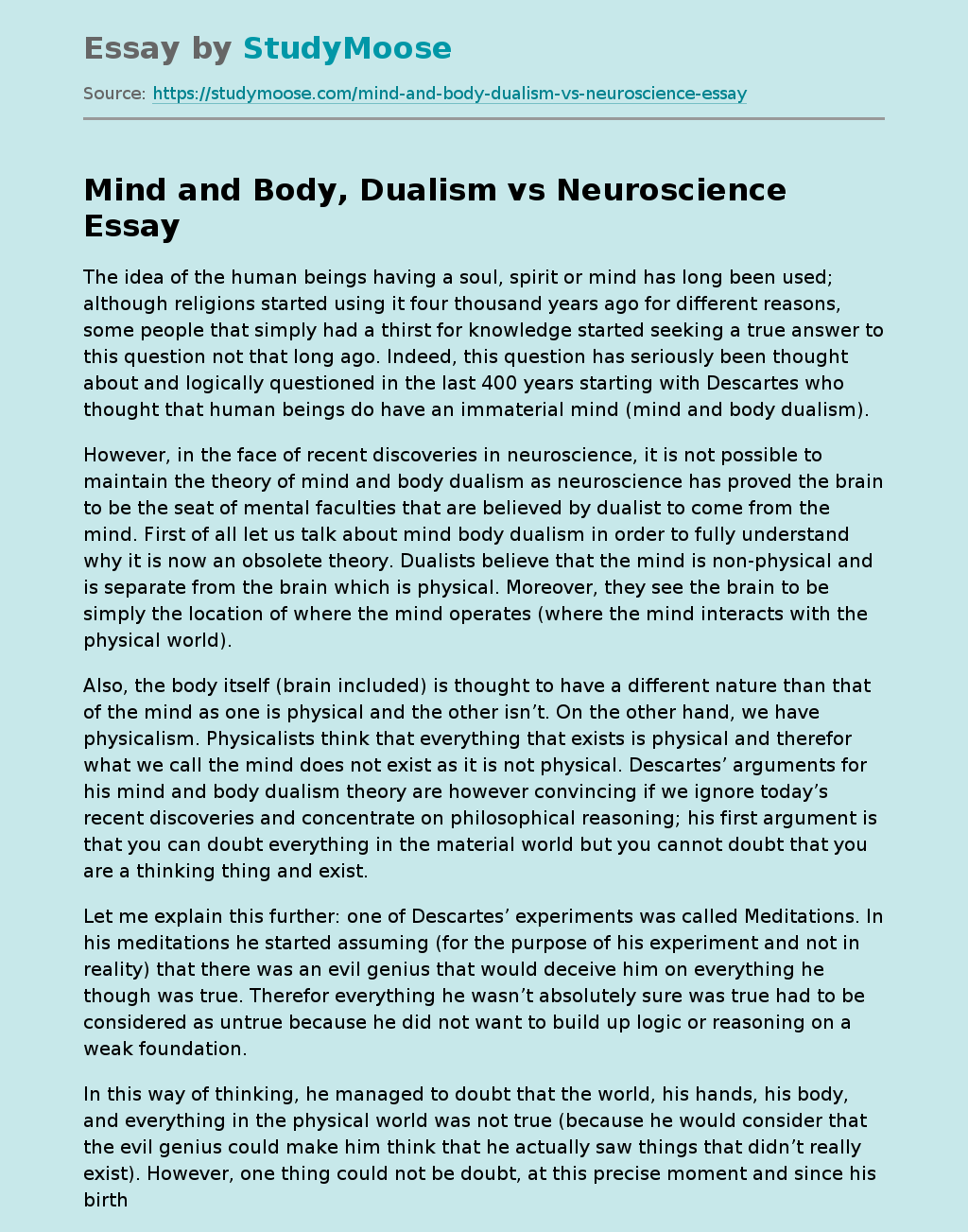