In the film ‘Million Dollar Baby’,directed by Clint Eastwood is mainly based around the theme of how the important characters as vehicles to convey the theme familial love and support. This is shown when the theme is set up through Maggie and Frankie having broken relationship with their families, but it was resolved when they came together. Having familial love and support is important to an individual’s wellbeing. Without love, humans become isolated and unsatisfied. Therefore, by coming together, they express a similar familial love although they are not biologically related and experiences this fulfillment in life.

Turn in your highest-quality paper
Get a qualified writer to help you with
“ Million Dollar Baby Film ”
Get high-quality paper
NEW! AI matching with writers

The characters from the film demonstrated the beauty of this relationship. Eastwood successfully conveyed the idea through various visual and oral techniques. Throughout the film, secondary characters also supports the success of the protagonists to show family support is essential for the main character to achieve their specific goals.

Eastwood conveys the idea of the importance of familial love for Maggie, in “Million Dollar Baby”, through the relationship between Maggie and Frankie, her boxing trainer.

Maggie and Frankie, both have broken relationships with their own families but the resulting emptiness is filled when they came together. Maggie does not want to live in a dysfunctional family as her family cares little for her well-being. Her plight is summed up in the quotation when the audience is told that she wants to escape from her miserable life, “ I’m 31, Mr. Dunn, and I’m here celebrating the fact that I spent another year scraping dishes and waitressing which is what I’ve been doing since 13.

My brother’s in prison, my sister cheats on welfare by pretending one of her babies is still alive, my daddy’s dead, and my momma weighs 312 pounds. The only thing I ever felt good doing was boxing.” Although Maggie saves up enough of her prize money to buy her mother a house, her actions are not appreciated. Her mother berates Maggie for seizing her welfare payments and Medicaid benefits. Frankie’s support provided the energy for Maggie to succeed in her career.

In Frankie’s situation, he was alienated from his daughter for an unexplained reason. This is shown when Frankie’s letters along with his pain comes back to him with‘ Return to Sender’ written on them. Frankie expresses the pain of rejection through his facial expressions. Lighting was used in the film to portray this. Dim lighting was used whenever Frankie appears. His face was made barely visible with many shadows, one side being darker than the other. This technique of the different shades on the character’s face symbolized the two sides of Frankie’s life. The darker side symbolizes the terrible past of his life while the brighter side symbolizes the bright future Frankie will share with Maggie. Dim lighting on the returned letters is also used to express the sad mood in the scene. The letters are on the ground forcing Frankie to bend down to pick them up, which symbolizes his daughter’s rejection and his distant relationship with her.

When Frankie says to Maggie “ I made many mistakes in my life. I just want to prevent you from doing the same” it demonstrates his regret. This shows the relationship progress between Frankie and Maggie. He wanted to redeem himself by finding a ‘replacement’ daughter-Maggie. In “Million Dollar Baby”, Frankie’s life changed because of Maggie’s entrance. They each had personal needs due to the lack of familial love so personal fulfillments developed to satisfy each other. Both Frankie and Maggie have a lack of familial love therefore, as they meet, a non-biologically related love and support develops. Two examples of dialogue stand out in particular showing the development in their relationship. Maggie said: “ You’re gonna leave me again?” ,Frankie replied, “ Never” and when Maggie expressed “ I’ve got nobody but you, Frankie.” Frankie answered with a definite answer of “Then you’ve got me.”

Eastwood used both dialogues to express the same idea of that strong bond between Frankie and Maggie that has developed throughout the film. Frankie is the only one who helped and supported Maggie through her victory as he saw her as his own and wanted to make her the best by training her harshly which can be seen as another type of love. Maggie sees boxing as one important part of her life and does not want to give up. Finally won by her determination, Frankie accepts Maggie by making an agreement between them. Frankie then slowly shapes her into a viable fighter. The other technique used to show her success was lighting. The lighting used at the beginning of the film was dim and dark indicating the dark sides of Maggie’s life. When she succeeded, it changed into a very bright background. The brand, Everlast, on the speed bag was used subtly to show Maggie’s determination. She used this support to work hard to change her life and be successful for once in her life.

It all paid off when she was standing inside of the boxing ring. Without Frankie’s support, she might have never dreamed of that day. The theme of familial love and support plays a significant role in the film “Million Dollar Baby”. It is shown through Frankie and Maggie’s development of familial love due to their dysfunctional family. Familial love and support was also conveyed by the secondary characters supporting the protagonists as they express care and support to each other. Familial loves is shown as a complex idea in the film as biological love fails and another form of family is reconstituted. The audiences also learn that love is a powerful force that can transform families and provides fulfillment in the lives of people and to be successful in life, you have to have love. 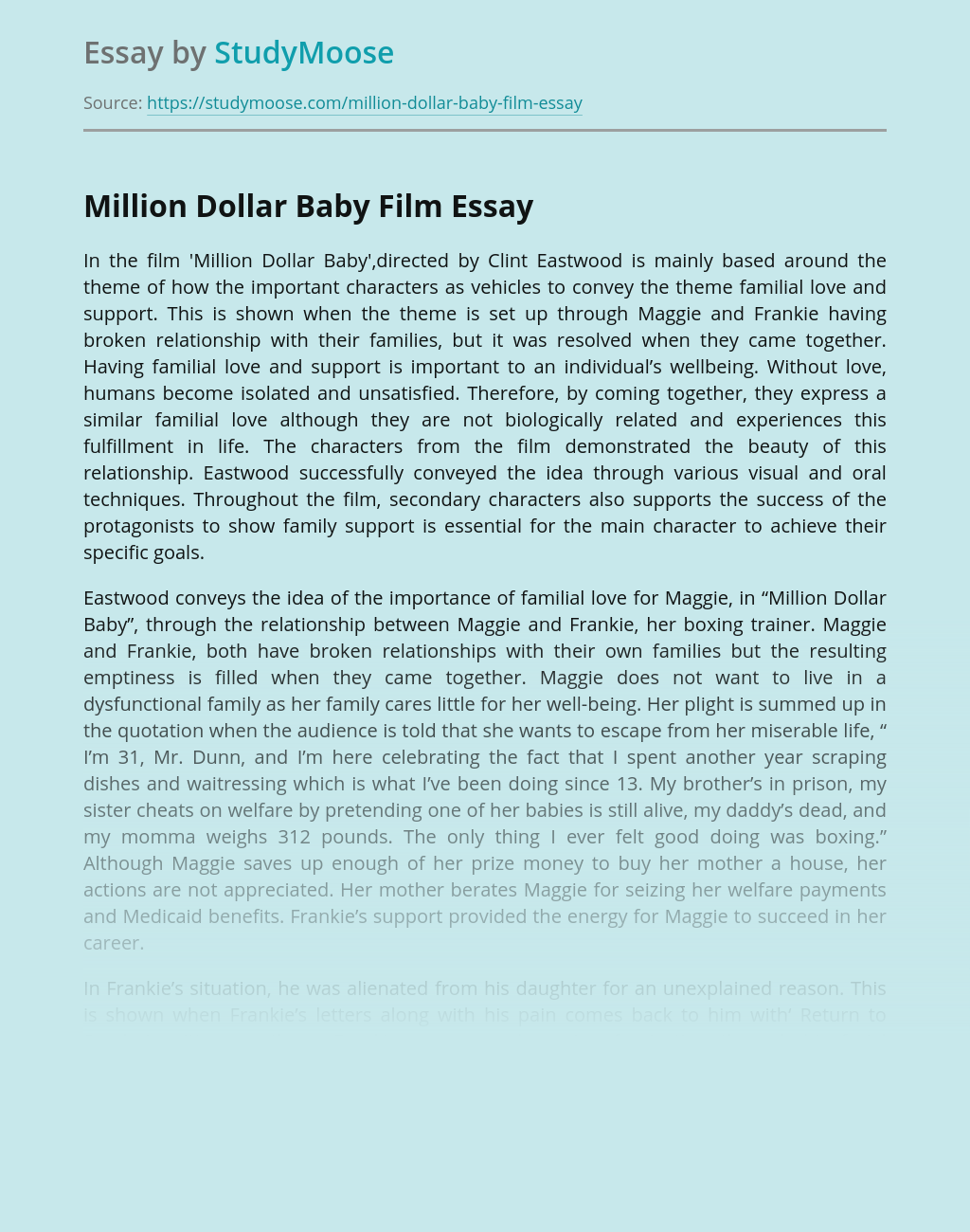 Turn in your highest-quality paper
Get a qualified writer to help you with
“ Million Dollar Baby Film ”
Get high-quality paper
Helping students since 2015
Stay Safe, Stay Original