Mill’s Utilitarianism in "Those Who Walk Away from Omelas"

The three theories of justice, by John Stuart Mill, John Rawls, and Robert Nozick are all different and found in many pieces of text we have read this semester so far. The three theories being Utilitarianism, Justice as Fairness, and Libertarianism. From Those Who Walk Away from Omelas, by Ursula Le Guin, to The Lottery, by Shirley Jackson, these theories of justice can be found throughout these specific readings.

Mill’s Utilitarianism essentially says that utilitarian’s are people who do not see a large divide between the concepts of morality and justice.

Don't use plagiarized sources. Get your custom essay on
“ Mill’s Utilitarianism in “Those Who Walk Away from Omelas” ”
Get custom paper
NEW! smart matching with writer

Utilitarian’s often look at justice as a part of morality and equate justice with moral concern in the sense that justice does not have any higher of a priority or importance than the moral concern. His piece also talks about how utilitarian’s believe they should promote things like happiness and well-being. A concept of utilitarian justice can be found in Mill’s work, Utilitarianism. Mill suggests that “Justice implies something which is not only right to do, and wrong not to do, but which some individual person can claim from us as his moral right” (Mill).

He’s talking about how justice is a subset or morality. Those Who Walk Away from Omelas is a great example of Mill’s Utilitarianism. Because the child in Omelas is being mistreated and kept in a cage, everyone in Omelas believes it is for the greater good, therefore it is perfectly fine to continue on with. Utilitarianism means also that every person endeavors to be happy and strives to reach their own selfish goals.

It is also the social norm in this community to accept that there is a kid being abused and mistreated in a cage, therefore people go with it. Everyone in the society goes with the norms, they are influenced by their culture and society, along with tradition to do so. It is said in Those Who Walk Away from Omelas, “the misery of the child is good…everybody tolerates it…it was tolerated ever since”. This quote proves the people of Omelas just deal with the situation and don’t think about it too much. The society of Omelas is extremely selfish, and only caring about their own good and the society’s own good.

The Lottery, by Shirley Jackson, takes place in a small Vermont town that holds a lottery every so often. The lottery, however, is not an average one. This lottery is to find out who should be stoned to death, judging by whoever gets drawn to “win”. This short story takes the classic American ritual and gives it a completely unexpected twist. The little town has never really questioned if their lottery is acceptable, or even necessary. The people of the town just follow this age old tradition blindly and don’t consider it to be abnormal. When one of the members of a family gets chosen by the lottery to be stoned to death, she has an immediate reaction. “It isn’t fair, it isn’t right,” she yells to the people around her. John Rawls theory of justice as fairness comes to mind when I think of this story. His theory describes a set of structures and principles in a society that promote fairness. He talks about how a fair society’s features would be chosen by rational people if they had the chance to do so. He also brings up he feels inequalities are essentially arbitrary unless you can expect that those inequalities will end up working out for everyone and to their own advantages. In The Lottery, it is technically not fair of course that one person is always stoned to death and it is judged on who is drawn in the lottery. However, if that is the town’s judicial system and it is a part of their society, and the townspeople are all under the belief that it will work out for the towns advantage, then maybe it is fair.

Robert Nozick’s Libertarianism ideas however, are very different from the previous two. Nozick has a more practical approach to defining the role of justice and he agreed that state intervention should be minimal in a society. Nozick was for personal freedom staying as free as possible and felt that any government should stay out of it unless it’s for defense purposes. Nozick has a historical and practical approach concerning roles of justice. A lot of Nozick’s conclusions and opinions surrounding his theory are very different from John Rawl’s. Rawl’s is more concerned with making sure that nothing is preferential or prejudiced when it comes to justice as fairness. For him, all members of society are all created equally, and should all be able to have the same exact freedoms in their lives. Nozick is concerned greatly with taking into account the historical accounting of everything to preserve justice.

John Stuart Mill’s Utilitarian theory, John Rawl’s Justice as Fairness theory, and Robert Nozick’s Libertarianism theory are all found in different parts of text we have read this semester. Whether it be in Those Who Walk Away from Omelas by Ursula Le Guin, or The Lottery by Shirley Jackson, there are instances in both stories that can support the different theories of justice. Each theorist having different opinions and beliefs concerning morals and the judicial systems, but all relating to everyday life and situations we are all put through as members of society.

Mill’s Utilitarianism in "Those Who Walk Away from Omelas". (2021, Sep 17). Retrieved from https://studymoose.com/mill-s-utilitarianism-in-those-who-walk-away-from-omelas-essay 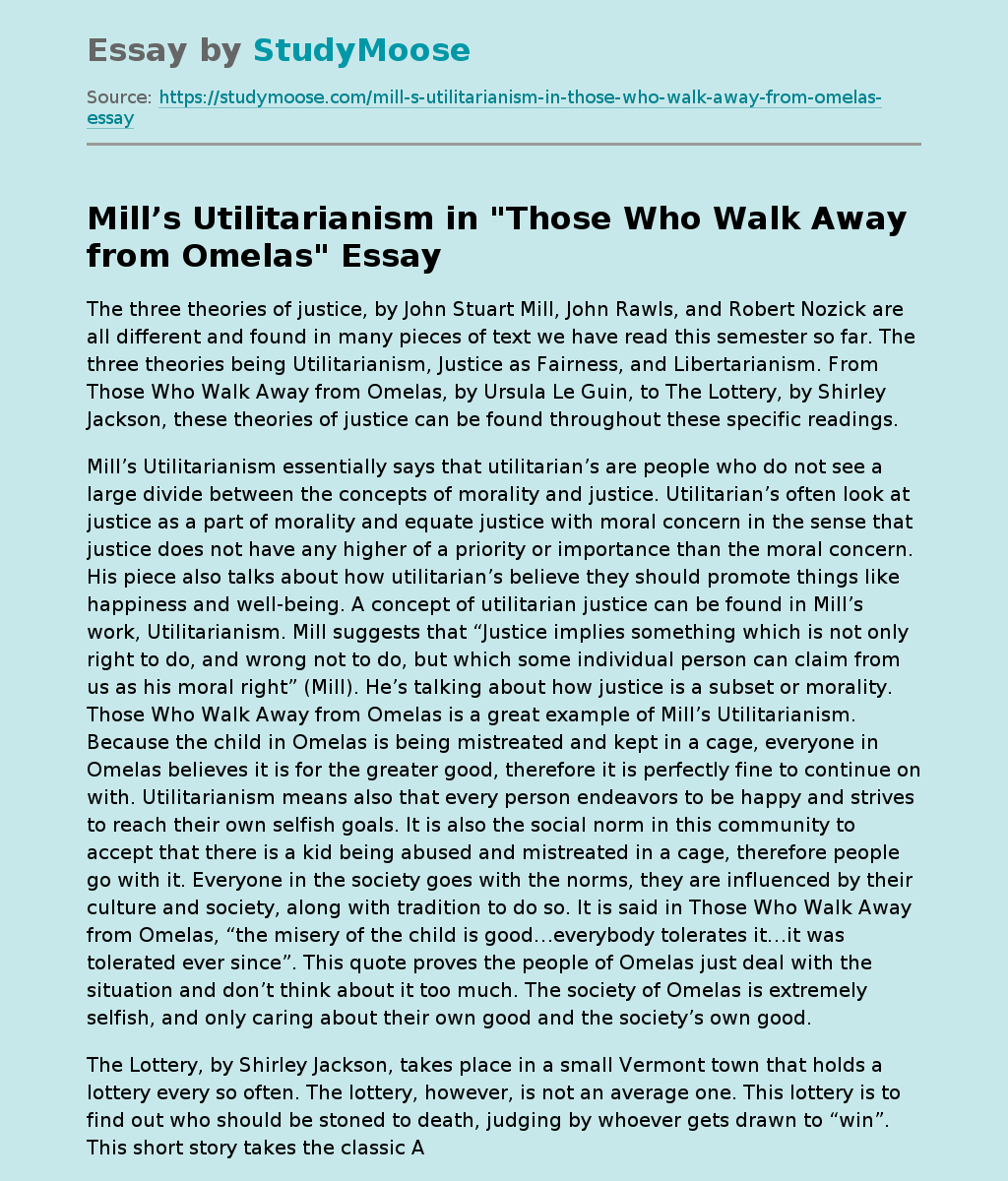