To the untrained eye there does not seem to be too many variations between the civilian world and the military world besides the evident like uniforms, stricter standards of living, and traveling. However, to the trained eye one huge difference stands out. That difference is mutual respect. The fact that mutual respect exists, and is demanded is a major difference between the civilian world and the military world. The Army has even come out with an Army Regulation, which is a manual on how to show proper respect and etiquette.

Don't use plagiarized sources.
Get Your Custom Essay on Military Customs and Courtesies Just from $13,9/Page

The manual covers such things as personal salutes and honors, courtesy visits within the Army, and even Inter Service and Military-Civilian visits all that I think are important things to know as a future officer in the Army.

A salute is defined as “show[ing] respect and recognition to (a military superior) by assuming a prescribed position” by the Merriam-Webster Dictionary. The exact origin of the salute is unknown. It is said that the salute began in late Roman times when assassinations were rampant.

When the citizens wanted to see a public official, they had to advance toward the official with their right hand raised to show that they did not have a weapon. The showing of the right hand eventually became a symbol of respect. It is also, in some form, used all around the world. Many historians think that the United States military salute derived from the “open hand” British Army salute that is palm down and toward the shoulder.

In the Army, any personnel in uniform are required to salute if they recognize persons entitled to the salute. Persons entitled to the salute include the President of the United States or Commander-in-Chief, Commissioned Officers, Warrant Officers, any Medal of Honor recipient, and Officers of friendly foreign countries. Salutes can and should be exchanged with soldiers of the United States Navy, the Air Force, the Marine Corps, and the Coast Guard. The only time that an Army soldier is not required to render a salute is when either party is in civilian attire.

The hand salute is not the only salute rendered in the Army. There is also the cannon salute. The tradition of firing cannons is also said to have derived from the British, though it is the British Navy this time. Back then firing a cannon would somewhat disarm the ship. Hence, the firing of cannons represents respect and more importantly trust because by firing you are leaving yourself open to attack. Cannon salutes also include the 21-gun salute, which is considered the highest honor a nation renders.

Another thing that I thought was important but was not really covered in Army Regulation 600-25 is what to do during the reveille or retreat. I do not know how many times I have seen someone honking his or her horn during it because someone stopped in the middle of the road. I do understand that different posts have different requirements. However, I think that it is important that we be aware of what is going on around us and know how to react. The reveille and retreat time is set by the installation commander. However, the times maybe different, your actions should be the same. If you are in civilian clothes, you should just stop your car and wait for it to finish. If you are in uniform, you have to stop, come to attention, and render a salute in the direction of the flag. Something simple but I see many people lost when it happens.

The Army Regulation also covers courtesy visits within the Army etiquette. It tells the dos and don’ts regarding keeping friends or more appropriately social contacts. Social contacts among officers of the Army are important. Mainly because keeping in contact with your fellow officers builds teamwork, respect, assurance, and common understanding. Having all of that insures sufficient military leadership. Though the manual outlines what should be done, it is ultimately up to the commander of the individual officers organizations to what extent the principles should be followed. I feel that as future officers this is very important. Some of us are graduating this winter and going on to be commanders of units.

According the Army Regulation, courtesy visits have to be done unless there are unforeseen circumstances that permit the visit. The regulation even tells how long a visit should be, “… of approximately 15 minutes’ duration”. It even suggests the use of Visiting cards. Visiting cards are used during the visits or in the absence of the senior ranking officer as a courtesy. Visiting cards are like giving out a regular business card. They should include the grade of rank in which the officer is serving and it can show the branch of the officer. Ultimately, the cards can be any size and type but “the most commonly accepted size is 3 ¼ by 1 ½ inches, with shaded Roman engraving”.

The regulation goes on and on about the dos and don’ts regarding courtesy visits of officers on ship and on shore. The thing to be most concerned with is if the officer comes off the ship. If they stay on the ship, it is pretty much the commanders’ choice as to whether or not to send someone on board the ship to say hello. Otherwise, they are not required to go aboard and greet the officer on board the ship.

The Army’s customs and courtesies are guidelines that are used to show respect and act as a symbol of solidarity among soldiers in the army. The respect that Army personal shows each other is one of the key things that set military soldiers from everyone else. As a future officer or even as in existing officer, it is important to adhere to this regulation. It was put in place not to make you do “another thing” but because it creates a bond among Army personal which leads to a mutual respect and understanding. 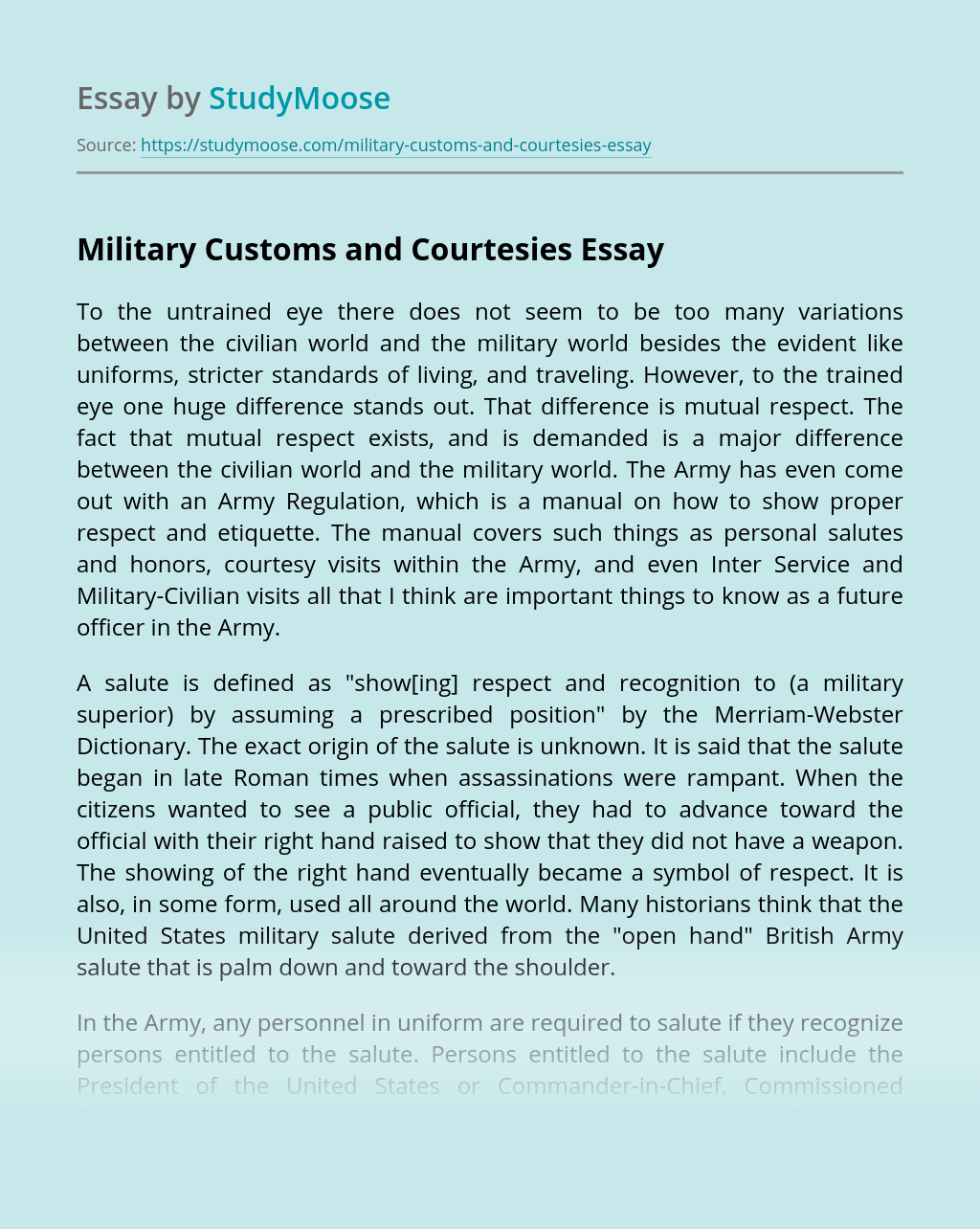 In this 3 – minute speech, you need to promote a product or an idea to your audience. You must use Monroe’s Motivated Sequence to organize your materials. Some research is required to support your claims. Use this sheet as your guide to organize your thoughts and as your notes to present. Turn this in... VIEW ESSAY

When trying to persuade the boss it is important to state the facts and make sure to check the validity of these facts that will be presented before it is put forward. Remember to quote your credible sources, as you may be asked about where your data arrived from. Analyze the persuasive effectiveness in terms... VIEW ESSAY

Blues and Jazz are both very popular genres of music spanning almost a century of culture, aesthetics and spirituality. As the blues and jazz are horribly interrelated, this paper will try to differentiate the two great genres of music. A. What is Blues? Per definition, blues is the name given to both musical form and... VIEW ESSAY

Modern life confronts us with ever new problems. They appear because our society and science do not stand still; they develop and become more complicated. Many of the studies and discoveries that are being made today in the fields of human genetics are truly revolutionary. Such discoveries include the creation of the so-called human genome... VIEW ESSAY