Customs and Traditions of India

Turn in your highest-quality paper
Get a qualified writer to help you with
“ Customs and Traditions of India ”
Get high-quality paper
NEW! AI matching with writer

Many of these traditions have been around for thousands of years. With religion came traditions and rituals and practices. A few examples of these traditions include: Datar. Datar is the welcoming of the bride into the home of the groom by the groom and his family. This practice is seen as sacred and as a necessity. It is believed that if the ritual is not done right or not done at all, then the family is doomed to fail.

(IndiaNetzone) Another, less significant tradition, Upanayan, is the day that a male child begins his education.

An interesting fact about Indian culture is that they still use the caste system and many traditions are open only to the top three castes: Brahmin, Kshatriya, and Vaishyas. Upanyan is one of those traditions. (Freshroads) Another vital part of India culture is always giving. Giving is seen as the ultimate kindness and in India culture, should be practiced by everyone. Danam is the Indian tradition of giving gifts to one another.

Upanayan, The marriage ceremony described above, is a time where Danam is practiced constantly.

The bride gives gifts to the groom and groom to the bride. These gifts can range from gold to coconuts to cows. No gift is seen as the clothes from grandma for Christmas. In the final ten days of someone’s life, they are given many gifts which are believed to help them cross the afterlife dimensions and get to heaven. In fact the gift of a cow is believed to help souls of the deceased across a river in the dimensions before heaven. (IndiaNetzone) It seems as though there are many traditions, but how many people practice these traditions?

According to the 2002 census of India, approximately eighty percent of Indians practice Hinduism. This means that of the 1. 2 billion people that live there, about 960 million people practice these customs and traditions. That is pretty amazing considering the amount of gifts there must be given daily. With over one hundred perhaps two hundred traditions practiced by almost every India at some point in their life, this means that there are more traditions practiced in a lifetime than there are people in the world.

Also, if every Indian practices Namaskara, the Indian form of salutation, around 3-5 times daily, in just eight hours, approximately, there have been more Namaskaras than people in the world. (HowStuffWorks) Christianity has over double the number of followers than Hinduism. Although this data makes Hinduism seem puny compared to other religions, many of the traditions and customs are very similar to those of other religions including Christianity. And many of the non-religious customs are very similar to many of those of the American culture as well. In Indian culture, it is seen as respectful to salute to others.

Namaskara is the salutation of India. Namaskara is two people, bringing their hands together while bowing their heads and bringing their hands towards their heart and bowed forehead. This custom almost resembles the handshake of American culture. As stated before, people on their deathbed are given gifts. In American culture, flowers are brought to that person’s bedside and cards are often sent wishing that person good will. In Indian culture, the first day of school is seen as a special day. In American culture, the first day of school can be very exciting, and often times emotional.

In America, the family members of the deceased decide whether to burry or cremate the deceased. In India, the dead are almost always cremated. This is because Indians believe that cremating the body of the deceased grants easier access to heaven by releasing the soul from the body. In Indian culture, there are almost always arranged weddings. Unlike India, weddings are consensual in the American culture, not to say that Indian weddings are not consensual, but, American weddings are between two people who have know each other prior to being married.

In India, this is not always the case. Often times the bride and groom have never met until their wedding day. This is why Upanyan is such an important time for newly-weds, this is their first time, and their families first time, meeting the person they married. (IndiaNetzone) Although comparisons are not often made between American and Indian culture, once you see just how closely the cultures resemble each other, it gives you a different point of view on the two cultures and their similarities and differences.

When you take a closer look, you really see the differences, and similarities, between the American culture and the Indian culture. The India culture is very interesting and full of many amazing and almost insane customs and traditions. There are many traditions and customs, and even more people that practice them. When you take a closer look, you see the similarities between the cultures of the United States and India. Whether they’re religious customs or non-religious customs, they are fascinating. Whether it’s a person’s death, or, birth, there’s a tradition for the occasion.

Customs and Traditions of India. (2016, Oct 05). Retrieved from https://studymoose.com/customs-and-traditions-of-india-essay 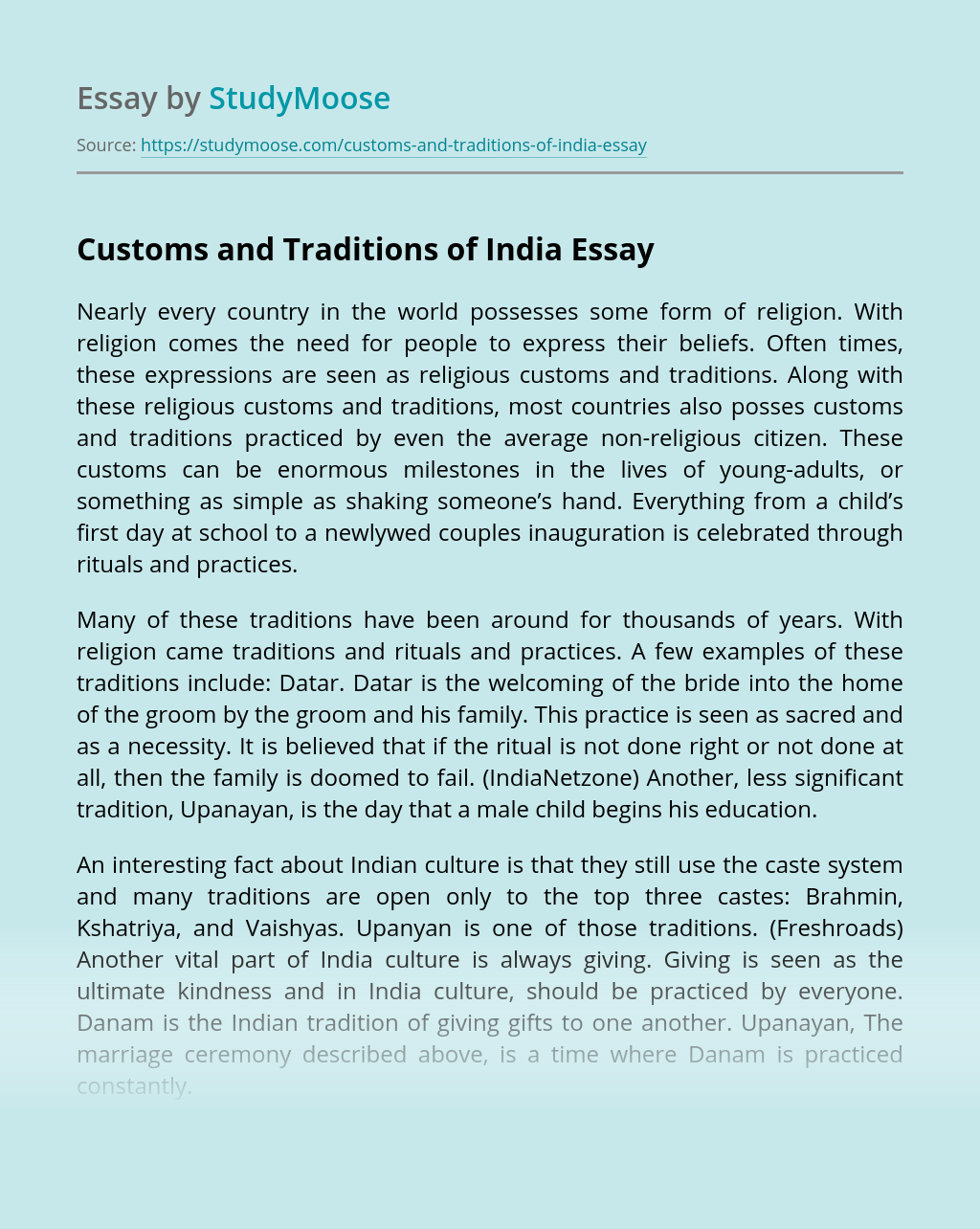 Turn in your highest-quality paper
Get a qualified writer to help you with
“ Customs and Traditions of India ”
Get high-quality paper
Helping students since 2015
Stay Safe, Stay Original