Mid-Term Break and On My First Sonne Comparison

Discuss the ways in which these poets explore the universal themes of grief and loss. (Seamus Heaney’s ‘Mid-Term Break’ and Ben Johnson’s ‘On My First Sonne’.

In this essay I will be comparing and contrasting the two poems ‘Mid-Term Break’ by Seamus Heaney and ‘On My First Sonne’ by Ben Johnson. I will be focusing on their elegaic qualities aswell as their universal themes of grief and loss. ‘Mid-Term Break’ is about the aftermath of Seamus Heaney’s 4 year old brother’s tragic death and how his family and friends express their emotions and cope with the sudden loss.

Turn in your highest-quality paper
Get a qualified writer to help you with
“ Mid-Term Break and On My First Sonne Comparison ”
Get high-quality paper
NEW! AI matching with writer

Whereas the 17th Century poet, Ben Johnson is writing to express his sorrow for the death of his 7 year old son dealing with his feelings of loss rather than thinking about the reasons for the death or the effects of this on the rest of the family.

These are the intended effects they both have which I will be exploring and I shall be outlining reasons for this aswell in the rest of this essay including the interesting poetic devices and structure Ben Johnson and Seamus Heaney use and how they are similar and different from each other.

‘On My First Sonne’ was published on the year 1616 and is therefore more religiously based as at that time life was dominated by religious views. ‘Mid-Term Break’ was published in the 1980s so this will help me analyse the views of the 20th Century in comparison to the 17th Century and this is a main area I will be focusing on after an in-depth analysis of the intended effects of these poets when writing their poems.

‘On My First Sonne’ has a different intended effect overall in comparison to ‘Mid-Term Break’. One of the main reasons for this is that Ben Johnson is writing as a literal attempt to reach out to his son to say his final farewell with lines such as ‘Rest in soft peace, and, ask’d, say here doth lye’ which makes it seem that Johnson is communicating with his son. Seamus Heaney’s poem is more of a narrative describing what happened on the day of his four year old brother’s sudden death. In my opinion it seems as if Seamus Heaney is sharing his experience with other people who may have suffered in the same way and is exploring the emotions of more than just his own.

To exemplify this point, on lines 4 and 5 it says ‘I met my father crying – He had always taken funerals in his stride.’ This contrasts between ‘On My First Sonne’ and ‘Mid-Term Break’ on two levels, the first being that Ben Johnson has only included his own feelings in this poem such as on line 2 which says ‘My sinne was too much hope of thee, lov’d boy’ This has the effect that his poem is private between him and his son and is like a one-sided conversation.

Whereas ‘Mid-Term Break’ has a different intended audience altogether, I know this because the style of Heaney’s poem is a first-person point of view in the format of a story and there are more emotions and feelings described including his parents and family members’ aswell as friends. By analysing the poetic voice and intent I can confidently make an opinion that ‘Mid-Term Break’ elegizes Heaney’s loss of his brother and ‘On My First Sonne’ is a lamentation for the loss of Johnson’s son.

Both poets explore the themes of grief and loss in their poems. An example of the emotions of grief in ‘Mid-Term Break’ can be explained by line 4 which identifies the many elements he has incorporated in a subtle and in this case a distinct manner which says ‘I met my father crying’, this blatantly shows the mourning of a close family member. But this feature does not appear in ‘On My First Sonne’, not only that he has not described anyone’s feelings other than his own but he does not show expressions of grief in such a blunt form as in Heaney’s poem. Johnson has described in line 5, ‘O, could I loose all father, now. For why’, that he has intense grief and is questioning faith for why it happened to him.

But the abrupt features account for the theme of loss in each poem aswell which is similarly very open in ‘Mid-Term Break’ leaving nothing to the imagination, it paints a full picture of the scene in line 16, saying ‘Snowdrops and candles soothed the bedside I saw him for the first time in six weeks. Paler now,’ this tells the reader the loss that everyone suffered and a place of mourn was set up for a long time in Heaney’s brother’s old room. Also, the themes of loss do not only reflect on what family members and friends suffered. It suggests the loss of a childhood in two forms, Heaney and his brother. The reason being that obviously a child has passed away, but Heaney had to act very mature and throw away his child-like naivety to be told the horrible truth and to cope with the situation.

I know this because it says ‘When I came in, I was embarrassed by old men standing up to shake my hand’ which is on lines 8 and 9, he was uncomfortable with the maturity and attention he had to face and so shows embarrassment when he had to deal with people in a mature manner. On the other hand, ‘On My First Sonne’ does not fully show the reader that Johnson has encountered loss but with such lines as ‘Seven yeeres tho’ wert lent to me, and I thee pay,’ (line 3) it tells the reader that he has had seven years of joy with his son and relates it to ‘borrowed’ time that was paid back to god, subtly including his religious views which dominated the era of the 1600s. The themes of grief and loss are overall shown in a more distinct manner in Heaney’s poem whereas Ben Johnson has mainly kept these descriptions more subtle and suggestive.

There is a highly effective word, ‘father’, that in context of line 3 ‘could I loose all father, now’ is a great example to the religious as opposed to secular world of the 17th century as it has two meanings; the first is that father is another name for God, Christianity was the dominant religion and is a very dramatic word even in the 21st Century for religious believers as he is questioning his faith for why God has bestowed a horrible life-changing experience against him. In other words, he is saying ‘could I lose all faith, now’. The other meaning for ‘father’ is that Johnson had lost his son and status as a parent. Alternatively, in Seamus Heaney’s poem he has used next to no religious suggestions and phrases at all. Instead, he has entered a mainly secular approach with sentences that have hidden meanings such as ‘The baby cooed and laughed and rocked the pram’ which represents the care-free, naï¿½ve life of a child.

Each poem has a completely different structure from one another; the first factor I can clearly see is the layout of the stanzas which in ‘Mid-Term Break’ has a clear 3 line pattern. But underneath this outline shows enjambment from stanzas 3 to 5 which is very effective in linking the stanzas together. This technique is used probably to tell a story of what happened when he went into his home on the first day home from college since his brother had died and is effective at creating a scene as it wasn’t limited to 3 lines in a stanza. ‘On My First Sonne’ is entirely different altogether in the fact that the full poem has only one stanza which is 12 lines long but is similar in a way that it isn’t limited to a number of lines in separate stanzas.

A small factor I can also see is the final line in ‘Mid-Term Break’ which has a great effect in compelling the reader to make up their minds on how he was feeling in an eerie final sentence. In terms of the language choice he has used in my opinion he is expressing anger by using the dramatic metaphor ‘A four foot box, a foot for every year’ which means that his brother was only four years old. Ben Johnson has included a dramatic sentence that represents the bad influences and effects the world has on a child and that his son has escaped it in line 7 which says ‘To have soon scap’d worlds and fleshes rage’, this represents that he has escaped evil and temptation (In the Lord’s Prayer).

Overall, my opinion on these two poems is that Seamus Heaney’s ‘Mid-Term Break’ and Ben Johnson’s ‘On My First Sonne’ although similar in representing the themes of grief and loss, are two very different poems in factors such as their intended audiences and religious / secular views. The structure of the poems are very different in stanzas and grammar (Because of era when published) and both of the poems do explore the themes in a similar way but for different intended purposes.

Mid-Term Break and On My First Sonne Comparison. (2017, Sep 27). Retrieved from https://studymoose.com/mid-term-break-and-on-my-first-sonne-comparison-essay 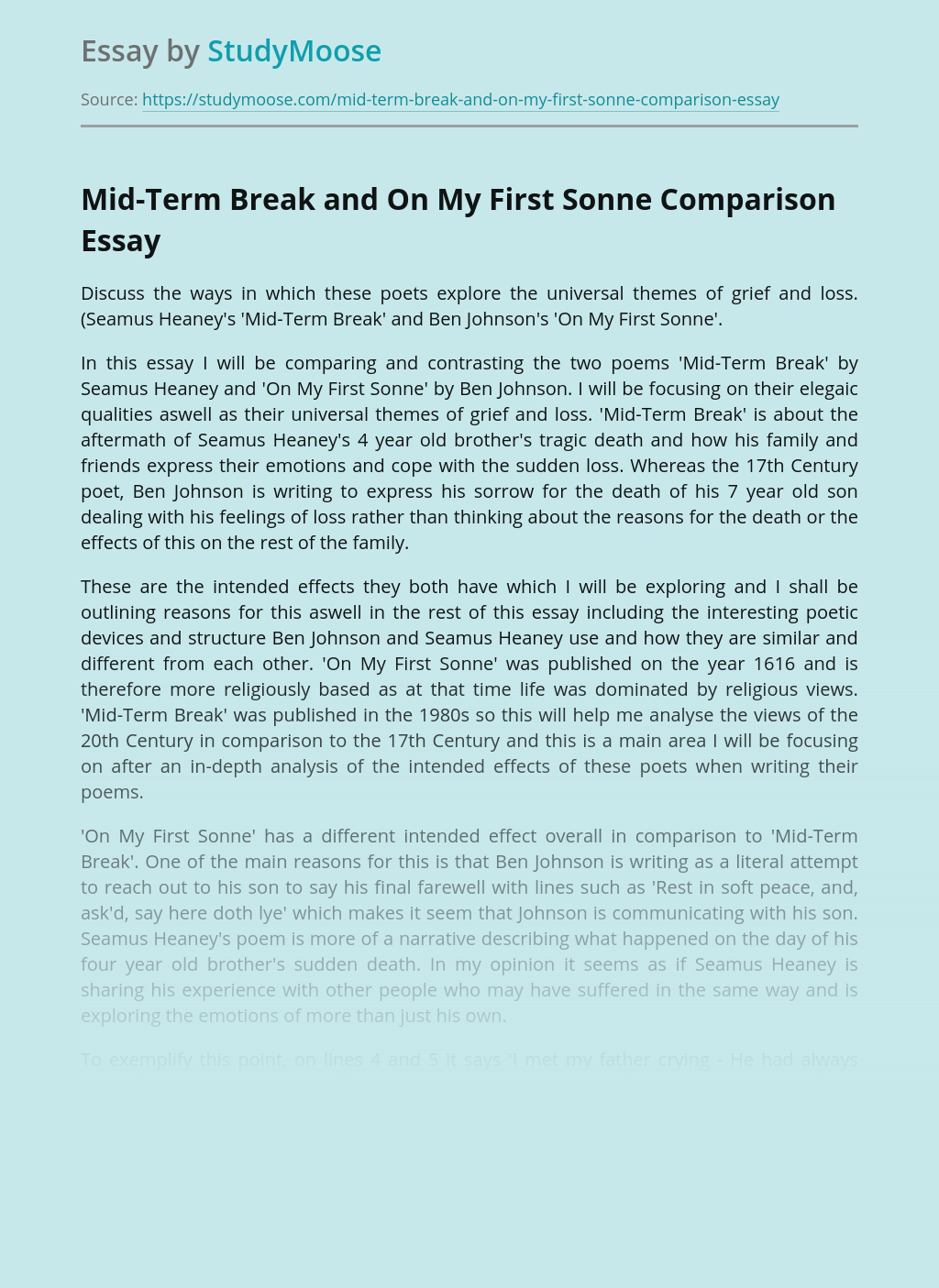 Turn in your highest-quality paper
Get a qualified writer to help you with
“ Mid-Term Break and On My First Sonne Comparison ”
Get high-quality paper
Helping students since 2015
Stay Safe, Stay Original