Message of a Poem On My First Sonne

“On my first Sonne” is a poem where Jonson describes his reaction to sorrow when his first son dies. Jonson confronts conflict, loss and despair when “Ben Jonson his best piece of poetrie” was “exacted by fate, on the just day”. He uses his son as an inspiration in this poem and describes his different stages that he has gone through by using language and structural features in this poem.

The structural layout in this poem suggests that a progression of ideas is taking place.

Don't use plagiarized sources. Get your custom essay on
“ Message of a Poem On My First Sonne ”
Get custom paper
NEW! smart matching with writer

The first five lines indicate struggle, conflict, loss and despair. He experiences shock and guilt as he says, “My sinne was too much hope of thee, loved boy”. The feeling then develops to acceptance in line six, where he asks rhetorically “For why will man lament the state he should envie?” Jonson then follows this statement with various points trying to argue his bitterness and guilt. Simultaneously, he resolves his feelings in the last lines by saying “For whose sake henceforth, all his vowes be such,”

Throughout the poem, modality in verbs changes, this supports the idea mentioned above.

Jonson uses low modalities and conditional phrases at the beginning of the poem to show doubt, confusion and guilt. Because of the progression of ideas throughout the poem, the modality in the verbs change from low and conditional to high modality and declarative. He shows this by using this phrase at line nine: “REST in soft peace, and, asked, SAY here doth LYE.” These contrasts with the phrase used in line five when he says “O, COULD I loose all father now?” which has a low modality.

Jonson uses part rhyme in the words “Sonne”, “sinne”, “soone” and “Jonson” to link them together. This highlights the development of ideas and the motif of the poem. These words are meant as metaphors of all his feelings towards the loss of his son.

Jonson uses the phrase “Farewell, thou child of my right hand and joy” to describe what his first child meant to him. Jonson uses an intertextual link to the bible when mentioning “child of my right hand”. He is referring to Benoni, the eleventh son of Jacob [Israel] in the book of Genesis. Benoni means child of grief and Benjamin means the son of my right hand. The poet uses this analogy to describe his feelings of the painful departing of his son and what it meant to him. “Joy” is used to contrast Benoni and causes confusion and uncertainty.

Another language feature in this poem is presented in line three, “Seven yeeres thou wert lent to me, and I thee pay”. This phrase has twelve syllables and has three stresses at “SEVEN YEERES THOU”, meanwhile the other lines have ten syllables and are in iambic metre. This is used to emphasis the “seven yeeres” that his child lived.

“Lent” and “pay” are contrasts. These two words illustrate that Jonson considered God as an owner of his child, rather than his own.

“O, could I loose all father now.” (line 5) and “Ben Jonson his best piece of poetrie” (line 10) uses polysemy to interpret different characters. Jonson uses polysemy in line five to interpret three characters; Ben Jonson Sr., Ben Jonson Jr. and the Heavenly father himself. If the words are moved around, there will be different interpretation to the phrase. “O” signifies pain and clamor. “Could I loose all father now” can have different interpretations. Ben Jonson Sr. could have meant that he will lose his privilege as a father, Ben Jonson Jr. could interpret that he will lose his father and the “father” can be read as the heavenly father.

Line five and six has the same rhyme than line nine and ten. Line six set up a rhetoric question,

“For why Will man lament the state he could ENVIE?

Line nine and ten define the “state” that “man…could envie” in reference to the poet’s feeling,

These four lines have the same rhyme. This language device is used to link the four lines together to indicate us a connection between the question and the answer.

Throughout the poem, Jonson changes from first person to third person. This stresses the separation between the father and the departed son. Jonson uses first person in the first half of the poem, speaking to Jonson jr. directly as he is alive, when he says::

“My sinne was too much love of thee, loved boy,”

This line puts the words into the reader’s mouth, making the reader think that Jonson was speaking to the boy. But as the poem develops; Ben Jonson Sr. and Son are being divided apart. Later on, third person is used to indicate separation. Jonson uses this technique to show polysemy and argue that the son and father are still together even though death separated them.

The use of sibilance in the poem creates a peaceful and restful atmosphere. Jonson builds up sibilance consonants throughout the poem. This could mean that Ben Jonson Sr. is reconciling with the feeling of pain that he is undergoing with his struggle. A good indication could be line seven; “soone scap’d worlds”, it has three unstressed syllables in a row, suggesting a change of mood in the poem. This is followed by line nine that has five sibilance: “REST in SOFT PEACE, and, ASKED, SAY here doth lye.” This line possesses sibilance supporting the idea of a tranquil mood in line seven.

Jonson concludes the poem by vowing not to love “he…never like too much”. This father’s feeling on the loss of his son, has brought Jonson to use various structural features to identify his stages of sorrow he has gone thought. The use of various language features, such as polysemy and rhyme describe his various interpretations to his grief and gives the reader the challenge to understand fully “Ben Jonson his best piece of poetrie”.

Message of a Poem On My First Sonne. (2016, Jul 05). Retrieved from https://studymoose.com/message-of-a-poem-on-my-first-sonne-essay 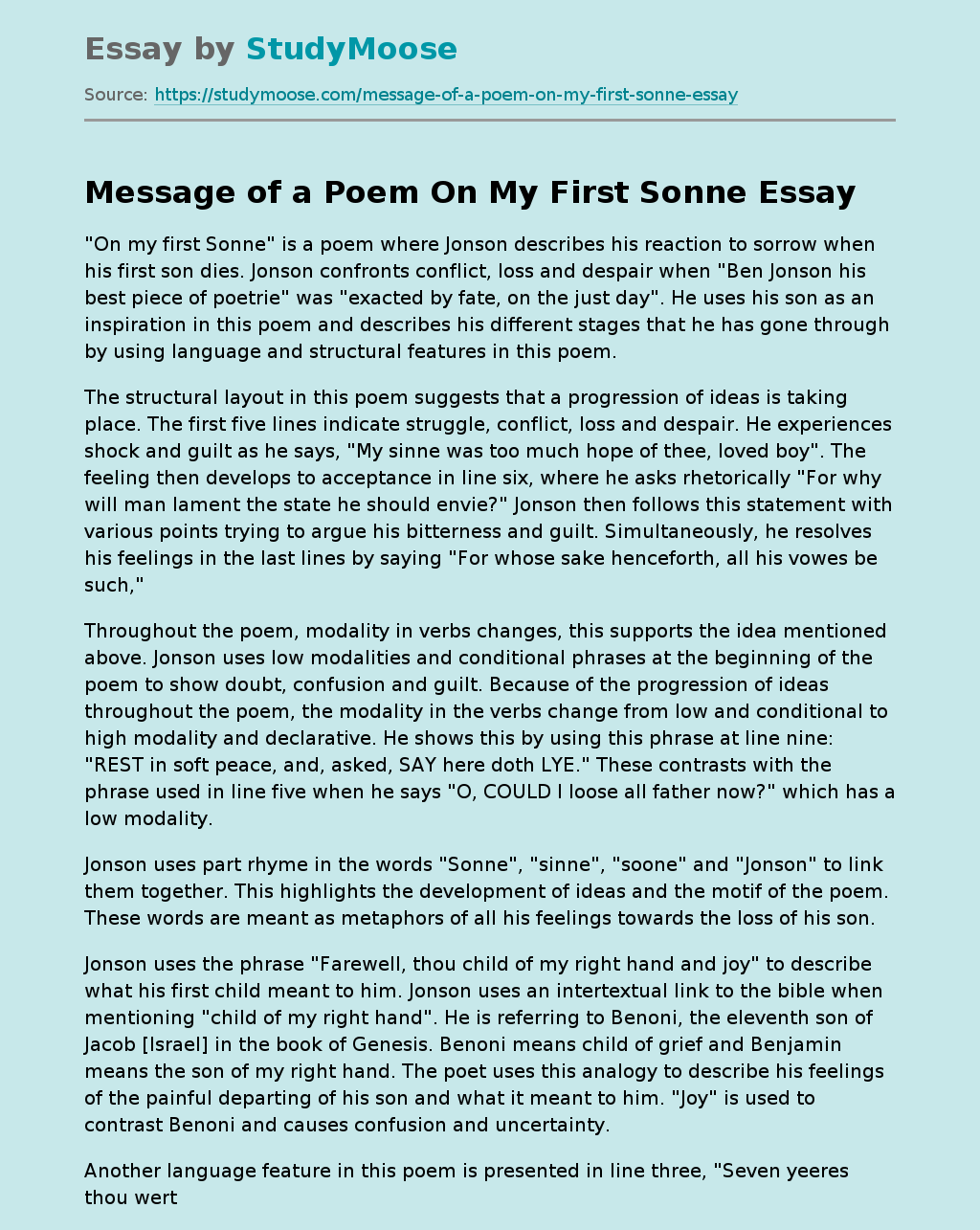