Mercury Drugstore’s Primary Target Market Demographics : Ages ranging from 18 to 65 years old who may be male or female that belong to any social class – B, C, D, and E Marital status – no specific status.

The available market size using research data show that 6 out of 10 Filipinos are now opting for generic medicines over the more expensive branded counterparts.

Data from researches show that out of every 10 Filipinos, 6 Filipinos are now opting to purchase generic medicines over the more expensive branded counterparts. For a $2 Billion Pharmaceutical market in the Philippines $1.2 Billion 60% for Generic Medicines $800 Million 40% for Branded Medicines.

Increase of cold months in the country caused increase of incidences of pneumonia. Pneumonia involves inflammation of the lungs and leads to hospitalization. Foreigners, especially those from non-tropical regions, are most susceptible to this in the Philippines because they have to adjust to the weather patterns.

Diarrhea outbreaks have been consistently on the rise in Philippine soil, especially with the recent aftermath of Typhoon Ketsana (Ondoy in local name).

Physical, emotional and social factors contribute to this prevalent problem of Filipinos.

More underweight than overweight, Filipinos often have to consider societal gaps as a primary factor. The ill distribution of wealth in the country attributes to most Filipinos having less food to eat on their plates.

Many Filipinos continue to fall victim to drug addiction. There are over 3.5 million habitual drug users in the country, and some of the national scandals in the past have been linked to illegal drug use. The ongoing struggle against illegal drug addiction is an uphill battle.

A more recent DOH problem involved the hyper increase of cases of leptopspirosis in the Philippines, particularly in La Union and other flood-stricken areas. The onset of consecutive floods from the string of typhoons Ondoy and Pepeng caused contaminated water to fill the urban and rural areas.

Improvements in the field of computers have made operations in the stores more efficient and less time consuming and as well as having a more organized system of recording purchases.

Mercury drugstore now is on the verge of implementing an online purchasing system in which customers may order medicines through the internet and then picking up the goods at the store of purchase. This will help the store reduce the number of people in queue and as well as offer customers a better way to purchase their items.

Technological advancements have now brought about better medicines and as well as a larger variety of medicines giving the company a chance to broaden their stocks as well as the number of their consumers.

The 3g system of the current netphones are now able to give people an opportunity to get in contact with the store so that their concerns can be acknowledged as well as any order of goods.

Mercury drugstore now implies the senior citizen discount which is mandatory according to the laws of the Philippines. Mercury drug has also been able to adopt a senior citizen lane in their stores nationwide.

The need to be healthy is highly needed in the Philippines especially with poverty on the side. Most Filipinos that belong to the lower class tend to over exert themselves and end up with exhaustion, which has a high probability of leading to sickness. So daily supplements are needed to be able to sustain a healthier body while facing harsh working conditions. 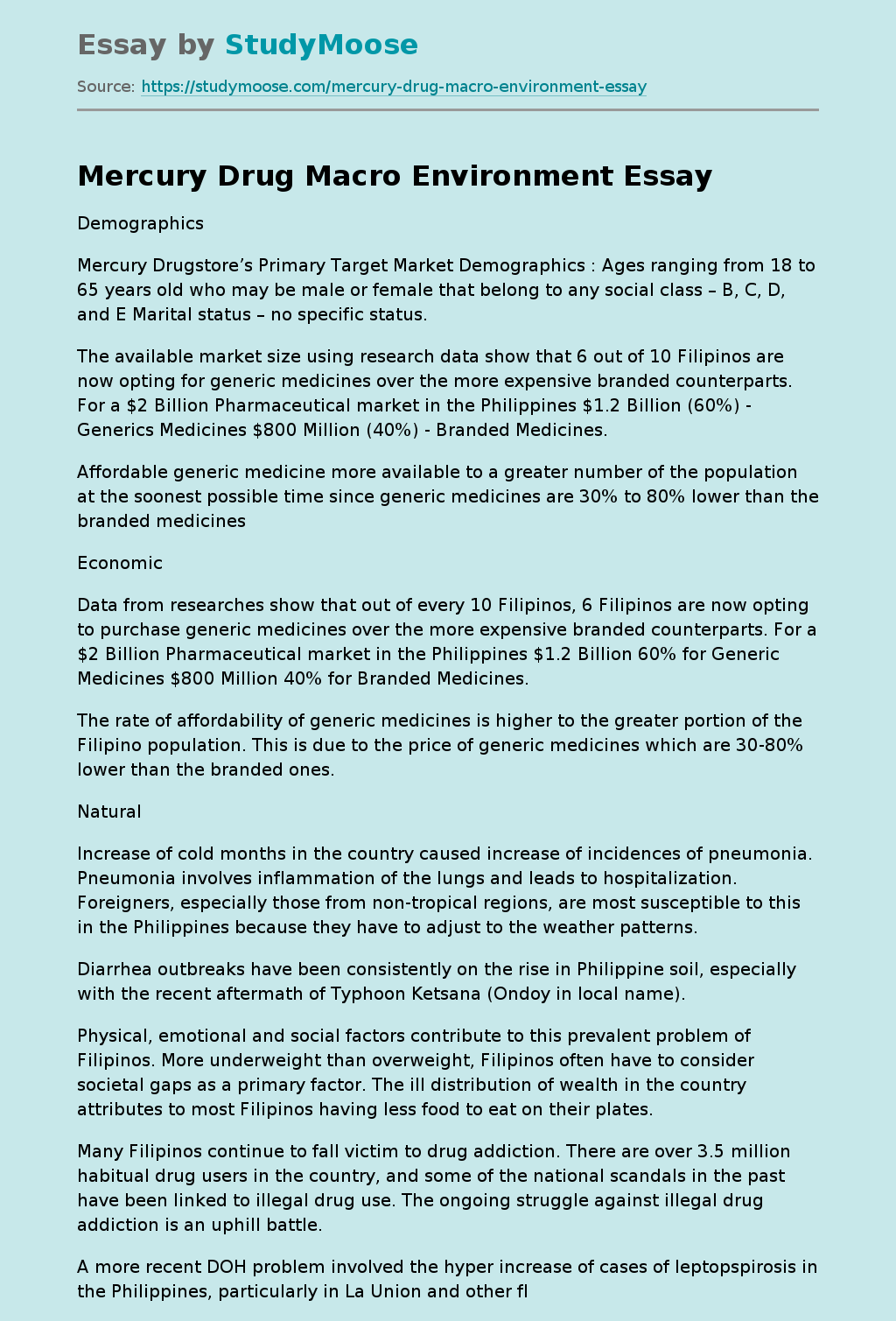