The UK drinks industry is a i??16 billion a year business with many different brands, markets and products, thus making the competition very intense, the industry is also affected by social and economic factors. The drinks industry contains various markets those being beer, spirits, wines etc, however these are all highly competitive with many products within them, and thus some are used as substitutes for others for example some consumers may prefer to buy beer to wine, and therefore can affect the sales of products in other markets.

Don't use plagiarized sources. Get your custom essay on
“ Macro Environment of the UK Drinks Industry ”
Get custom paper
NEW! smart matching with writer

With the industry having many markets such as spirits, beer etc social factors have a large impact upon them, whereby peoples tastes and fashion have affected the sales of many products, this has been highlighted where Dickinson’s department have been trying to make potential new drinks, but with the social factors involved they want a product that will be around for quite some time, not being “flavour of the month” which is down to social trends.

Another social trend that has affected the drinks industry is the time of the year the products are bought by consumers such, the highest being Christmas worth an expected i??5 billion, whereby a large number of new drinks and newly disguised old ones are competing for shelf space at this time of the year where consumer spending on such products are at its highest.

Sherry and port has also suffered social impacts where it has become to be regarded as “unfashionable and unexciting amongst the high spending yuppies”, this is another example of where social trend can affect the sales within a market for products due to social changes. Overall it seems that Harvey’s has been affected the most by social trends, which is why in light of this the company is trying to market new products.

Economic factors that affects the UK drinks industry are recession and high duty prices as shown in the “Marketing Assessment”; this has been shown in the spirits market whereby due to an increase in these sales have been affected, but however factors such as these can affect all of the various markets if they are to fluctuate as they affect consumers. 2. 0 In order for drinks in drinks industry to be successful some aspects need to be considered, from their development to their sales to the potential customer, whereby issues can arise.

Promotion considers the advertising of the product i. e. the communication of the business to the consumers, many companies within the drinks industry use this and as shown by Bailey’s and Malibu it can be very costly, but however there are various types of promotions available each having different impacts upon consumers, as shown by Malibu, where various methods are used such as TV, magazines, competitions and sponsorship of an event, also Harvey’s has also implemented TV coverage for advertising Bristol Cream.

The place is concerned with where the product will be sold such as shops, bars, pubs etc. The Casino Royale drink shows gives the impression that it is available for anyone and that no consumers have specific characteristics to buy this drink, but however this is not the case as being the nature of the product, it is more than likely bought mainly by young females, also it has been released nationwide implying that an undifferentiated marketing strategy is being used though for some differentiated markets have been used.

Differentiated markets is where the market is the process for attacking the market by tailoring separate product and marketing strategies to different segments in the market, this is shown by Harvey’s with the brands of Bristol Cream and Monterez whereby they are aimed at different types of consumer. Geographic segmentation was used as part of a test launch for the Harvey’s brand Monterez in the South of England, also psychographics segmentation is used, this is concerned with identifying personality traits and distinguishing characteristics in groups of the population i. . for the Monterez brand these are young and female who favour lower strength drinks.

Product development has been used various drink companies; these are Goldwell, Barcardi, Harvey’s and a company in China, these have are all innovative products which are new to the market enabling further competition, yet it is mentioned that Harvey’s has 10 potential new products though many of them will not be produced this will be mainly due to screening and business analysis (containing costs, demand and profitability i. . financial). Harvey’s has also used re-launched a product which called Tico replacing the failed Harvey’s eleven, this was done by keeping the content the same but using a different marketing strategy i. e. changing the packaging. All forms of the product development were obviously satisfied for the launch of the Harvey’s Monterez drink whereby it was test marketed, this is the final on whether or not the new product is being marketed appropriately.

Branding is use by many of drinks company’s especially amongst the larger ones this is used by Bailey’s, Malibu, Harvey’s etc and is unique in identifying differentiate competing products creating both a physical and emotional trigger to create a relationship between consumers and the product. By having brand loyalty this ensures strength of preference for a brand compared to other similar available options, and is a way of attracting potential customers towards new product developments.

Competition has a large impact upon the drinks industry, as John Spicer says, “… the market is big, but relatively over populated the failure rate for new flavours is high”. The competitiveness of the market is furthermore shown by the expenses of advertising campaigns by companies such as Baileys and Malibu where they have spent i??2m and i??4m respectively.

Takeover battles such as Allied-Lyons us Elders and Distillers us Argyll, shows the intense amount of competition within the industry, as well as the various types of markets such as beer, spirits etc all competing against one another. There are various stages at which products are at within the product life cycle. The various stages are introduction, growth, maturity and decline. The newly developed p[product just put into the market are at their introduction stage.

Harvey’s Monterez is up to the growth stage of its life cycle as is the Casino Royale drink as they have surpassed the introduction stage. However products such as Baileys and Malibu where their sales have declined does not necessarily mean that they are in the decline stage of their life cycle as they are the market leaders, and this may prove to be a mere fluctuation, as more money spent on advertising and better marketing orientation could change things, despite these it would be fair to say that they are in the maturity stage of the product life cycle. 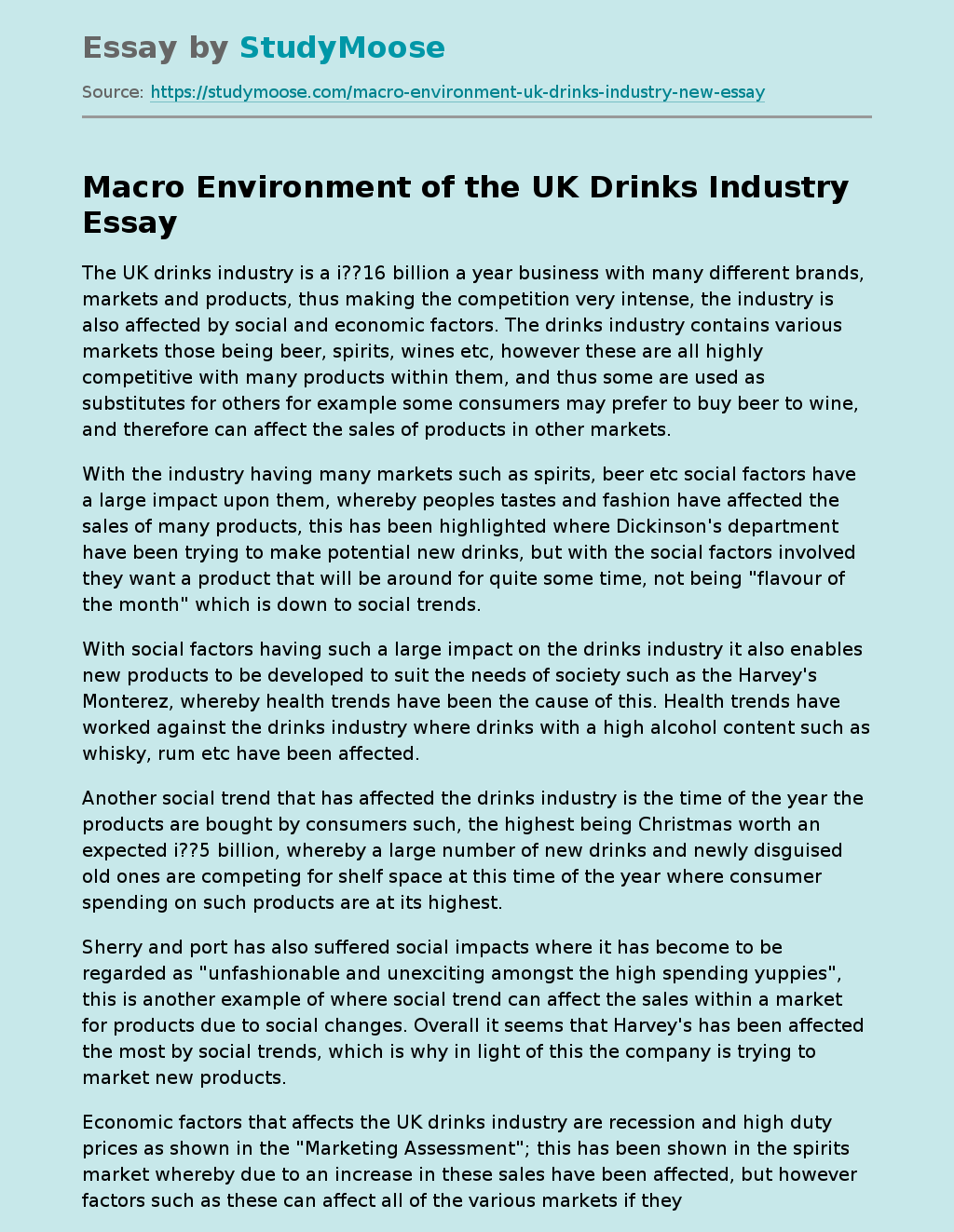