In 2017 India finally banned electroconvulsive therapy for youngsters and outlaws the isolation of mothers using mental health care from their children under 3 years old. As a part of the revamp of the Indian mental health ratification, it gave every individual the right for proper treatments and access to governmental health institutions.

Presumably that there was not enough awareness nationally regarding the argument. Perspective 1 viewed the issue mainly from an economic, medical, and social perspectives. It was supported by its reliable resources and trusted well-known organizations such as WHO and Ministry of Health in Egypt which provided various amounts of numerical data and researches.

Don't use plagiarized sources. Get your custom essay on
“ Mental and Physiological Illness ”
Get custom paper
NEW! smart matching with writer

The statistical information was the most robust point perspective 1 had, showing that the epidemic is increasing as they stated that the number of individuals acquired in asylums were increased from 2015 to 2016. And according to (DALYs)” Egypt is by far the most affected country in the region for depression”. The opinions from Authorized specialists were taken into consideration as well.

However, the first perspective lacked the media scope which affects any society. The facts that were obtained were not as credible as the second perspective.

From a global scope, perspective 2 was backed up by a lot of organizations like MHA (Mental health America) and campaigns such as (UOKM8) to prove that there is awareness across the globe mostly as secondary relevant evidences yet they were all from trusted organizations and individuals. It showed that there is a media awareness stating Instagram and TheLadBible efforts to raise awareness, which perspective 1 lacked.

All the evidence gathered were both quantitative and qualitive. Perspective 2 lacked primary evidence.

Last but not least perspective 2 provided enough evidence proving that the majority of the world are taking innumerable actions to address and break the stigma. It made it difficult for perspective 1 to trump the argument.

In conclusion, yes there is an awareness of mental and physiological illness. In Egypt there is beating stigma that is yet to be broken but we are not living on an isolated island disconnected from the world. The majority of the world had already awoken and we could see the footprints of the actions that were taken spread across the globe in both sophisticated and na?ve countries such as India. They gave the prerogative to every individual to have an access of mental care services supported by the government. It’s just a matter of time before we can see some national actions.

Before conducting the research, I thought that nothing is being done but when the research was made, I was enlightened by the information I gathered. A lot of countries are taking some serious actions to fight mental illness. The argument between the two perspectives were balanced as they used the same amount of evidences. All the evidences were up to date. There was a clear line of argument. A lot of quantitative, qualitive and numerical data were used. However, my research lacked some primary evidences. The conducted survey was not accurate enough since a small group of people with no academic view on the issue answered it and they were mainly the same age in only one country. All of the individuals and specialist that were quoted in the essay didn’t have a prediction for the issue in the future

If I had another occasion to replicate the research, I will plan to have an interview with an intellectual doctor with a high degree concerning mental and phycological illness as my primary evidence globally. If I had the chance, I will get in touch with a person who had a depression or a mental illness and ask them how they coped with the issue from my country. Moreover, I will try to reach out to one of my friends living abroad to share my survey and conduct more data and spread it even more in my city and reach more people. In perspective one I will be exploring the issue more from the media perspective. 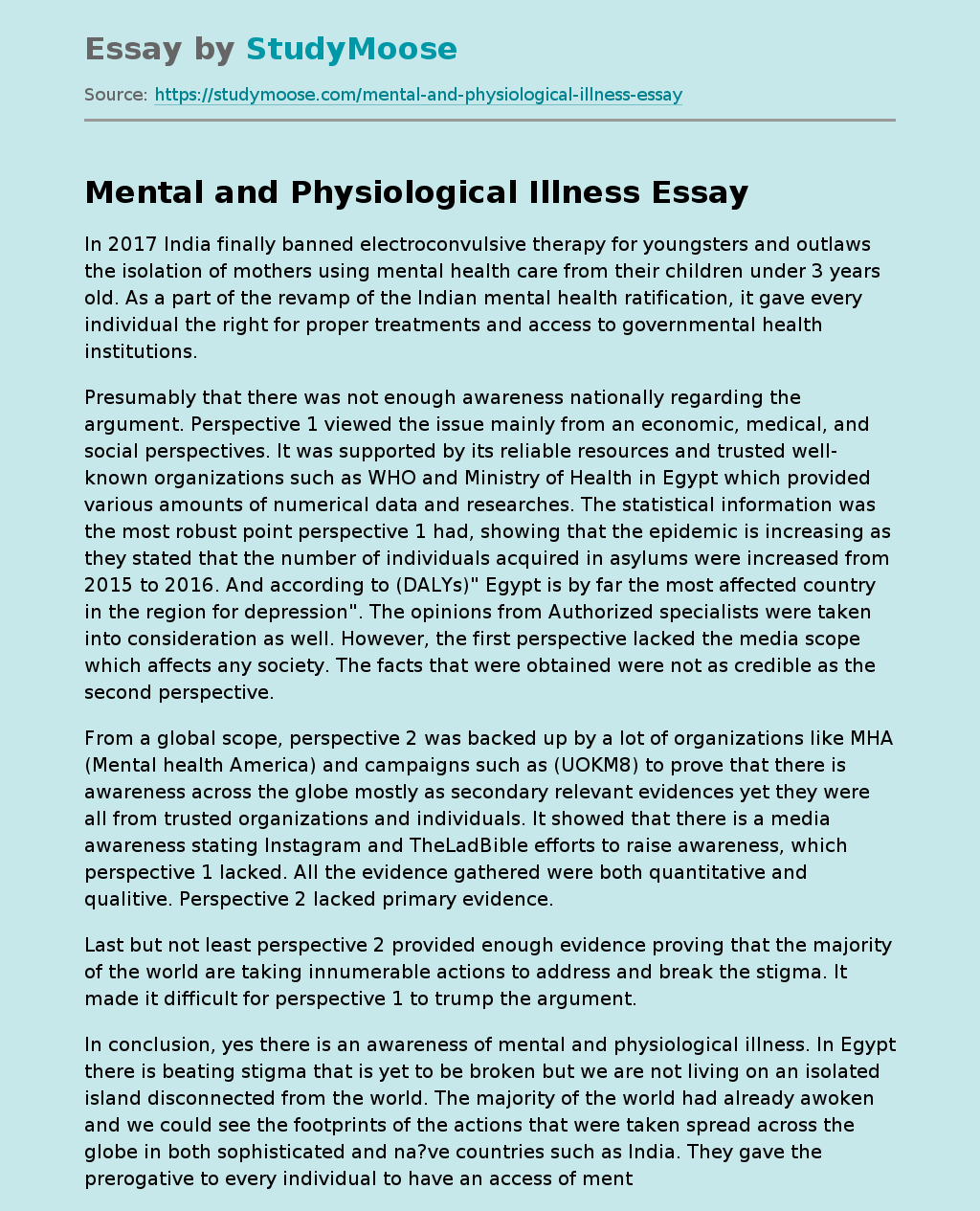