Media Uses According to Gratification Theory

The Uses and Gratification Theory is a theory by Blumer and Katz in which proposes that media users play an active role in choosing and using the media. It says that users take an active part in the communication process and are goal oriented in their use of the media. Blumer and Katz suggest that media users seek particular sources that best fulfills their needs and that they must make choices to satisfy these needs.

Throughout my reading of “Why Do People Watch Religious TV?: A Uses and Gratifications Approach” by Robert Abelman, I was continuously surprised at what I was coming across as many thoughts came to my mind.

Don't use plagiarized sources. Get your custom essay on
“ Media Uses According to Gratification Theory ”
Get custom paper
NEW! smart matching with writer

I was incredibly shocked and really taken by surprise to see such numbers be recorded for the viewing of religious television. As a follower of the Catholic faith I remain true and dear to my religion but I am not as avid of a follower as I should be as I do not go to church nearly as much as I should but am in the demographic of being a church member.

At the same time although, the demographic in which Abelman discusses touches on three key characteristics for which religious television viewers fall under which are typically older, of a lower economical class, and also of whom are often less educated. This fact of the matter that Abelman touches on I was not necessarily surprised by. In saying this, the fact that the elderly is more partial to watching religious television did not surprise me yet at the same time the fact that poorer, less educated people did surprise me somewhat. Not to be stereotypical but when I read this the first group of people that popped into my head were “rednecks” or people from the south eastern coast along the lines of North Carolina, South Carolina, Georgia, and so on. I say this because my first university was located in North Carolina where it was prevalent that many people were of a lower social class and often participated fully in religious activities.

From another perspective, I also have to consider the fact that since this article was in fact written in 1987 the results and data from the times the article was written are in fact accurate but, as for the present day in which we live in one must consider how television and the media has grown, evolved, and changed throughout the world as a whole. With this being said there are more channels, programs, and stations in which people can now watch their religious television on. For example, when I am back home in New York one of my favorite shows to watch is the Fresh Prince of Bel-Air and while this show that airs on ABC Family is irrelevant to religious television the show that follows it, the 700 Club, which is the flagship program of the Christian Broadcasting Network. This show is a prime example of how the expansion of television and technology worldwide has been able to broaden their horizons and appeal to different demographics in order to attract more viewers than the results from the 1980s portrays.

As for other programming that uses and gratification theory applies to I would believe it to be the news. There are many different types of news channels in which media users can watch in order to gain knowledge about daily and current events. In saying this there are multiple types of news programs in which media users can watch whether it be sports news, local news, national news, international news, or celebrity and pop culture news. It is these different niches of news in which can apply to the uses and gratification theory. As for programming that people would watch for reactionary reasons I think of television shows like X-Factor, American Idol, or The Voice. I think people like to watch television shows like this because it allows for the viewers to get involved in the show and vote for their favorite participant on the show. By involving the audience it in a sense gives them a chance to interact with their favorite contestants and allows for them to be a part of the show giving the viewers an inclusive feeling when watching shows like these.

Media Uses According to Gratification Theory. (2016, May 17). Retrieved from https://studymoose.com/media-uses-according-to-gratification-theory-essay 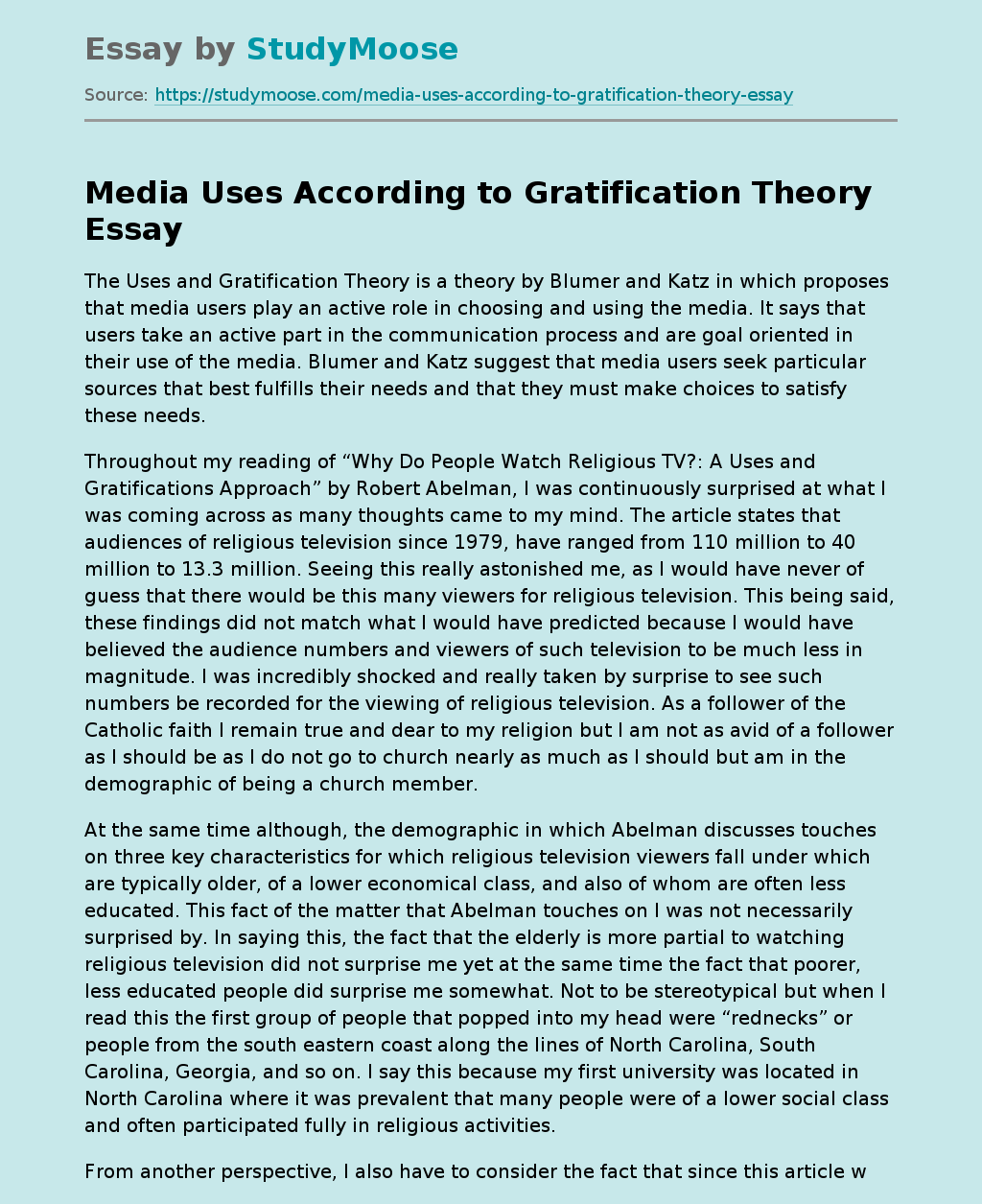