Media theory refers to the complex of social-political-philosophical principles which organize ideas about the relationship between media and society. Within this is a type of theory called `normative theory’, which is concerned with what the media ought to be doing in society rather than what they actually do. In general, the dominant ideas about the obligations of mass media will be consistent with other values and arrangements in a given society.

Theory according to different scholars

• According to Siebert et al (1956) in their book Four Theories of the Press, “the press takes on the form and coloration of the social and political structures within which it operates”.

Don't use plagiarized sources.
Get Your Custom Essay on Media Development Theory Just from $13,9/Page

The press and other media, in their view, will reflect the “basic beliefs and assumptions that the society holds”. In the western liberal tradition, this refers to matters such as freedom, equality before the law, social solidarity and cohesion, cultural diversity, active participation, and social responsibility. Different cultures may have different principles and priorities.

• Although normative theory of the press is now in a considerable state of uncertainty, not least because of changes in the media and the rise of new media forms, we can still identify certain broad traditions of thought about the rights and responsibilities of media in society and the degree to which a “society” may legitimately intervene to protect the public interest.
• Development media theory is applying in countries at lower levels of economic development and with limited resources that takes various forms but essentially proposes
• Media freedom under desirable conditions favoring the ones in power
• It demands that most institutes should be subordinated of necessity to the requirements of

The need for introducing
Media Development Theory
Goals of development media theory
It emphasizes the following goals:
• The primacy of the national development task.
• The pursuit of cultural and informational autonomy.
• Support for democracy
• Solidarity with other developing countries.
• Government agencies.
• Monitor training and licensing of media practitioners.
• Control development of media institutions.
• Regularly censor-media content before distribution.
• Issue regular guidelines for day-to-day operation of media Although different degree of self regulation is encouraged, media practitioners are not trusted by government officials to carry out their responsibilities without guidance and constant monitoring. 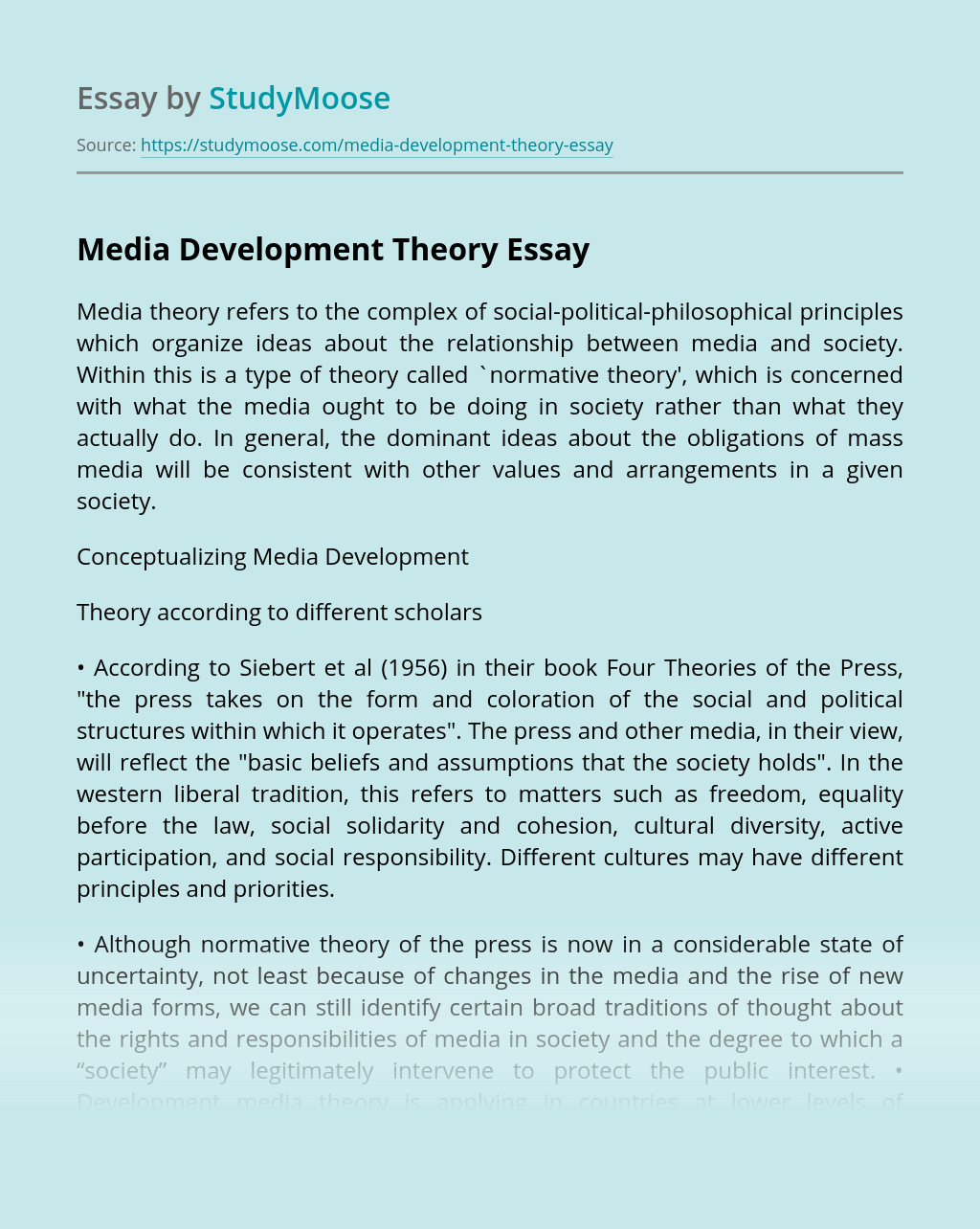 Government Intervention in the Workplace and Economic Development

In a free economic system, the decisions made by the buyers and decisions made by the suppliers, determine equilibrium prices and levels of output, in a free market. Scarce resources are thus allocated according to the competing pressures of demand and supply. An increase in demand of a product, signals the producers to increase the...

Get Essay
Economic Growth and Development

Development of Dance and Music in the Philippines

According to Atienza, Ramos, Salazar and Nazal in their book Panitikang Pilipino, “true literature is a piece of written work which is undying. It expresses the feelings and emotions of people in response to his everyday efforts to live, to be happy in his environment and, after struggles, to reach his Creator.” It is important...