Media plays a very important role in disseminating information in our society through the means of broadcasting. Information and ideas are able to reach and penetrate the public through broadcasted media such as television, radio, internet, and etc. However, there are restriction and limitation pertaining to the amount of truth that can be implemented and that is how censorship policy comes about. So what is censorship policy? Censorship policies are policies that are created to filter the content in media that can be considered as sensitive, harmful, inappropriate and even malicious.

Don't use plagiarized sources. Get your custom essay on
“ Media Law And Media Ethics Media ”
Get custom paper
NEW! smart matching with writer

Based on my understanding in Broadcasting Act 1988, I’ve to disagree with the statement because freedom of expression and censorship policy are both essential to a country’s development and growth. Censorship policy is a necessity to media because contents that are published through the media must always be checked and filtered in order to prevent harmful and misleading contents to reach the public. Examples are sex-related scenes, violence and gore scenes, and some to the extent of causing racial controversy among the people.

It is true that the contents found in media are not 100% true and authentic; However if too much truth and info are exposed to the public, then how certain are we that the public are ready to accept all the facts?

That boils up to the point, is all this restriction and limitation really necessary and needed? I will say it’s very important to be able to balance both freedom of expression and censorship policy. We need to have strong moral values in order to be able to filter contents that are useful and contents that may be harmful and malicious. We the people of the country are actually the cause of all the conflict and controversy that has happened in our nation. As long as we are not educated with proper moral values and ethics, there will always be issues regarding censorship policy and freedom expression. There is a saying: “With great power, comes great responsibility”. Based on that quote, I believe that both freedom of expression and censorship policy can be a very useful tool if we were to use it wisely but it can also be a very destructive weapon if we do not imply wisdom in using it.

The government should control the public from delivering hate speech but they shouldn’t restrict and stop the public from expressing honest opinion or we as a nation would always be distorted and blinded with lies. The case of Irene Fernandez has sparked up a very sensitive issue among the public. Irene Fernandez published a report on the living conditions of the migrant workers entitled “Abuse, Torture and Dehumanized Conditions of Migrant Workers in Detention Centres” and she was detained and charged for maliciously publishing false news. Do you think it is fair for a woman that merely defended the rights of migrant workers to be under the longest trial in Malaysia history?

I will end this essay with a question. Can our voices be heard fairly despite all this restriction and limitation? 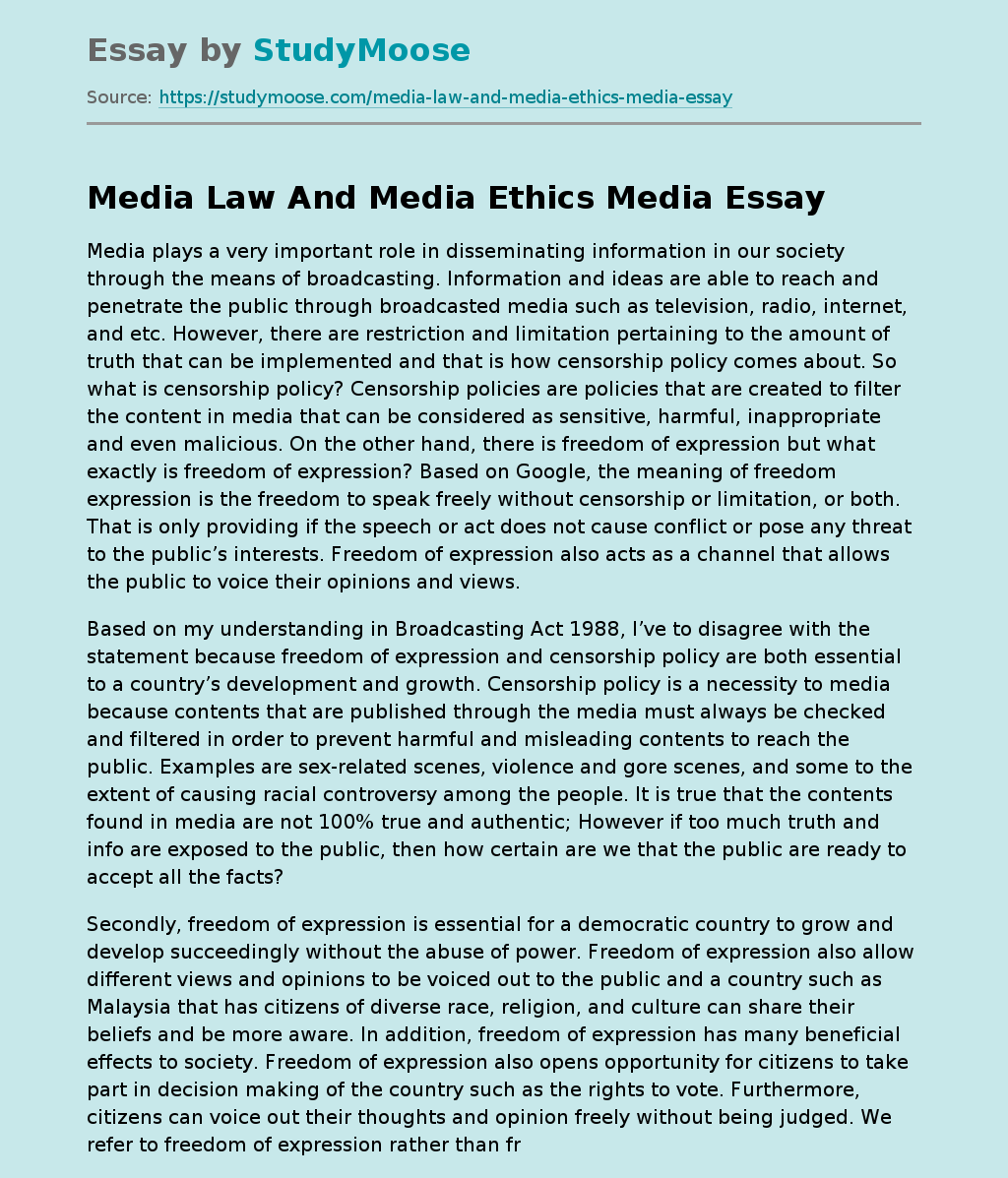