Meaning of Life and Dream Boy

“Dream Boy” is a song written by Natalia Genie, a high school student at A. S. T. Rafael Villeda, also known as “Faike”, was her inspiration. Faike was a 17-year old teenage boy who suffered from bone cancer. Faike was a very important person in Natalia’s life as well as in mine, and for many, many other people. During his struggles battling cancer, Natalia got inspired to write this song about him and his hard-hitting life fight. It’s a very emotive song, that has touched a lot of people’s hearts.

Turn in your highest-quality paper
Get a qualified writer to help you with
“ Meaning of Life and Dream Boy ”
Get high-quality paper
NEW! AI matching with writer

It’s a song people listen to when missing or thinking about Faike.

First, the title “Dream Boy” is an inspiration to believe in that no matter how hard life gets or how complicated it seems to be, you just can’t give up on your dreams. You have to dream big, try not to be so realistic in life. “I used to ask myself Why is this happening? Why were you the chosen one? And I used to believe that this was never goanna happen.

But now I see it did” is the song’s lead. It tells you about how you never imagine someone you love and care about having a really severe and fatal illness.

This verse represents the beginning of the journey when no one could understand that something so terrible could happen to someone so close to us and no one knew why it had to happen to him. The song continues with “And I bet it must be hard.

And I know that you are strong. And you will stand up when you fall. ” It’s a representation of the author having a conversation with Faike on how he inspires us and how proud we are of him because we all know his strength. Also, makes us realize that he is not a quitter and how he can fight to be in the top. The chorus goes like this “So Dream Boy, have faith in Him boy.

He is taking care of you. So why don’t you dream, dream, Dream Boy. Why don’t you dream, boy dream. ” It is one of the most important lines of the song that represents many things. When Natalia sings the word “Him” she is talking about God. Showing him God is by his side as well as all the people who care about him are. That God can make everything happen and we all should have faith in Him. She is also telling him to dream. Dream is a very broad word, but in this case it means to have faith that a miracle can come to light, to keep on living his life to the fullest.

Also, that he should have big hopes and dreams and cancer can’t get in his way into becoming the best person he could be, and to achieve anything he wants in his life. “If you keep smiling your heart will brighten. And the joy will burn the pain. He gave you the heart of a lion to keep you strong and brave. ” These verses imply if he gets all depressed about the fact he has bone cancer, he will even feel worse than the pain he has. So, if he believes that it’s over and that he lost his battle, he will worsen and feel that there is no point in even trying.

Then again, if he lives like if the cancer was not there, he will feel better about himself and what is going on in his life. When the author wrote “Heart of a lion,” she gave double meaning to it. The first connotation is that the lion is the strongest in the animal kingdom, meaning he is brave, strong and a fighter. The second one is for his favorite team in the world “Olimpia,” being the lion the team’s mascot. “It’s a struggle what your going through. And you must fight with all your might. And I know that it’s scary and I know that it’s hard. But it’s fine. You’ll be alright. Cause he is by your side. He’s by your side.

” These verse means that we really don’t know what he is going through but we know it’s harsh. It’s not something that is going to be cured from one day to another. It’s something really hard to get through and to battle with everyday of his life. So the only thing left to do is to fight with everything you’ve got. Besides all of that, he is going to be fine. If he dies, it’s going to be fine. It’s really sad, but he is going to be in a better place where pain is not felt anymore. If he survives, he will be with us and God will never leave his side. So he will always be fine, with or without us. “She is reaching out.

In conclusion, “Dream Boy” is the song. It is Rafael Villeda’s song. Only for him, telling his life story and his tough battle. It symbolizes how strong he is, how a great fighter he is. When people listen to “Dream Boy” the only thing that pops in everyone’s head is Faike. Sadly Rafael Villeda passed away in November 20, 2012; it was the saddest day in a lot of people’s lives and we have this song to remember how strong of a person he was. He is an inspiration of perseverance and now he is our angel in heaven that showed us how to be a dreamer and a believer.

Meaning of Life and Dream Boy. (2016, Nov 20). Retrieved from https://studymoose.com/meaning-of-life-and-dream-boy-essay 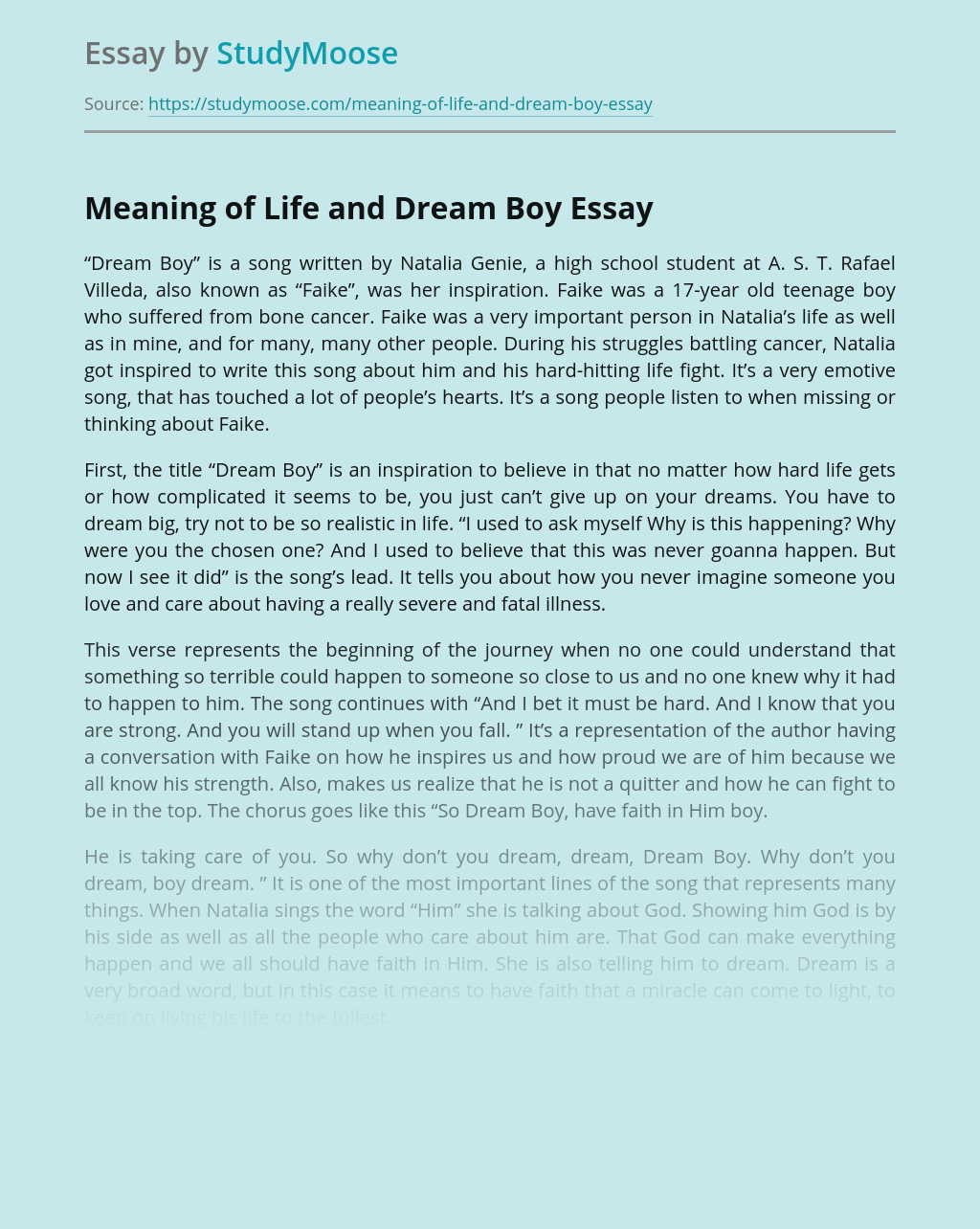 Turn in your highest-quality paper
Get a qualified writer to help you with
“ Meaning of Life and Dream Boy ”
Get high-quality paper
Helping students since 2015
Stay Safe, Stay Original