"Mean Girls" and its sociological structure

Sociology is everywhere we look, it is everything we are, and can be describe with everything we do. Mean girls is a very popular movie in today’s society. It seems as though people of all gender, sex, age, race, ethnicity, and class has seen this movie and can relate to some aspect of it. Mean girls portrays the rough life of high school and the many cliques it has in place. It shows the many challenges students and teachers go through to get to the end of the year.

Don't use plagiarized sources. Get your custom essay on
“ “Mean Girls” and its sociological structure ”
Get custom paper
NEW! smart matching with writer

In this movie I have seen many sociological themes. Many people in today’s society go through challenging things in our lives and high school is a teenager’s worse one. From discrimination to power, property, and prestige this movies depicts it all.

As portrayed in (fundamentalsofsoc) the popular girls also known as the “plastics” control the school in which they accompany. They control it by have good looks, money, Popularity, and power.

They receive all the material items wanted because their parents can afford it; with the exception of Cady. Originally there are three “plastics”: Regina George which is the leader of the group. Gretchen Wieners, and Karen Smith. Cady, a transfer student from Africa get the special and rare request to join their clique. There is a sub- click that Cady is a part of and that includes Janis Ian and Damian. Everyone in the school wants to be Regina George, so they copy everything she does. After Cady and Regina go for the same guy Cady wants to ruin the plastics because she and Janis which was out casted by Regina feel like the school would be better off without the hierarchy and social control that Regina creates.

The movie starts off with a stereotype. Stereotype defined as “a widely held but fixed and over simplified image or idea of a particular type of person or thing.” Cady sits down at the “Plastics” table after being peer- pressured into joining them during lunch and she gets questioned because the popular girls know everybody in the school and they had not seen her before. This is an example of social interaction. Cady mentions that she just transferred here from Africa. Gretchen Wieners goes about saying “If you’re from Africa then why you are white.” This shows the stereotype of Americans believing that all people that live in Africa are African American. This also happens with other cultures as well. They lay out a map of the cafeteria and who sits where and we see then that people are characterized in specific cliques such as: JV jocks, Asian nerds, and black hot ties and many other cliques’ people are set to be in. We also see that Cady’s culture is different from the common high school teenager. Cady does not partake in common teenage girl practices, she does not wear makeup, or dress provocative.

Regina, Gretchen, and Karen have rich parents. They use their wealth as power against everyone they know. Since they have everything there is a lot of jealousy in the air, also Gretchen ‘uses her wealth against the principle. When she is called into the office because of a burn book incident she says” I don’t think my father, the inventor of toaster strudel, would be too happy to hear about this.” She believes that her parent’s wealth will get her out of trouble which it does not. Regina she uses her property as her power. She as the biggest house, the biggest room and the nicest car. Showing off her property gives her power. When Cady and Janis try to ruin the plastics; shows the revolt against the governing body is seen a lot in other cultures. In a natural society there are always people that oppose the government and try to “Bring it down.”

In the middle of the movie Cady has a role conflict. She was supposed to go to Maddison with her parents, but her friends wanted her to do other stuff that night as well. She had to choose the role in which she wanted to partake in. She choose the role of a teenager. She threw a party. In the end Cady and Regina are both hated by the school and the “plastics” is no longer a governing body. The “Plastics” join other school clicks and everyone seems to be at peace until a new generation of plastics appear. It made a point that although one change occurred. That does not mean future generations will change. A change cannot occur over a generation unless there are people to pass the knowledge down the line. Which is why we store cultural knowledge in books, films and media sources. Mean girls shows many sociological themes through the entire movie which all involved social interaction and the biggest idea of the movie: social class.

"Mean Girls" and its sociological structure. (2016, Jun 18). Retrieved from https://studymoose.com/mean-girls-and-its-sociological-structure-essay 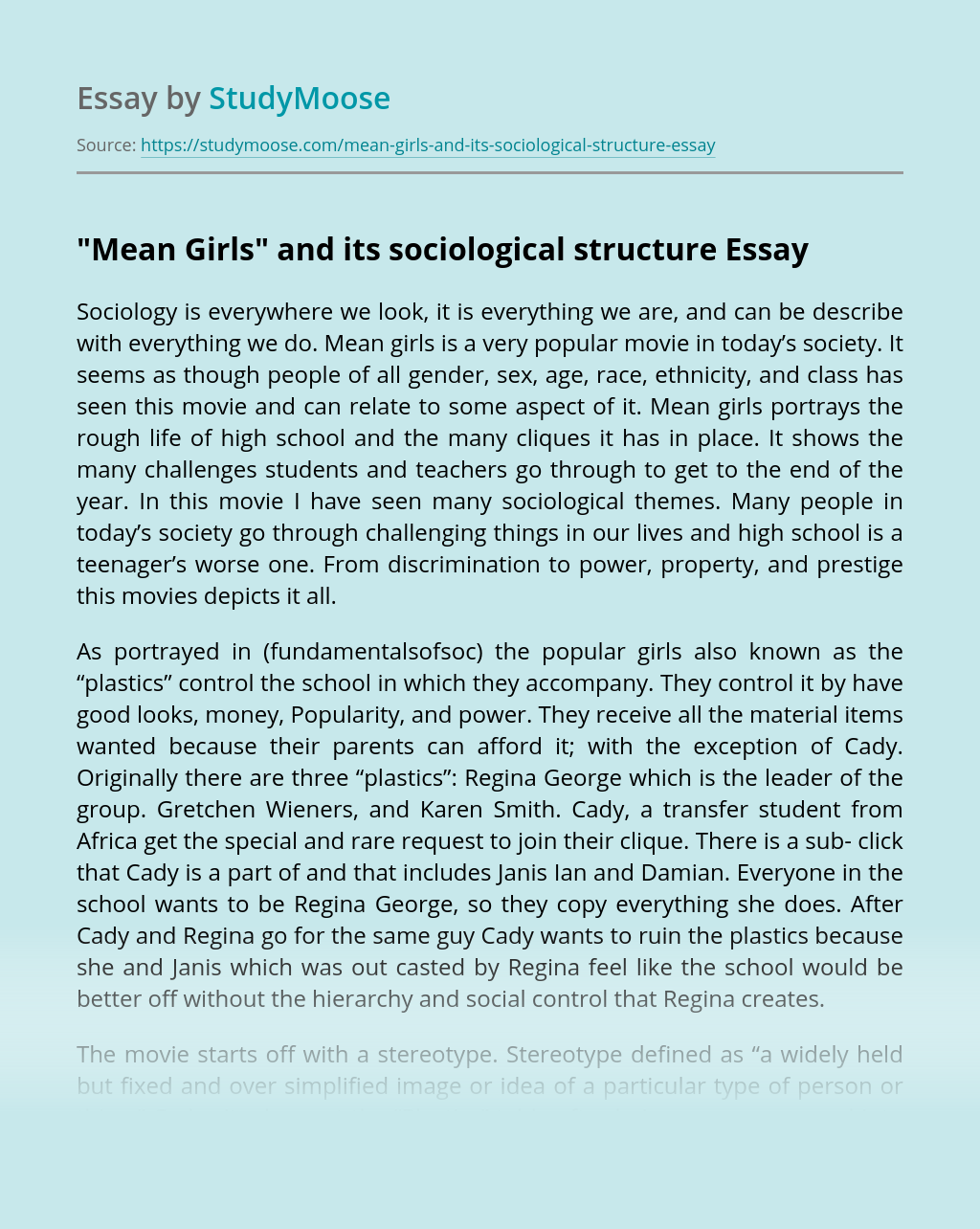