To further support this claim a study called “The People’s Choice” was conducted in 1972 by Maxwell E. McCombs and Donald L. Shaw. These scholars from the University of North Carolina studied the role of mass media in the presidential campaign in the town of Chapel Hill.

In the study they selected 100 undecided voters, because this group of people were “presumably those most open or susceptible to campaign information.” (Dearing and Rodgers,1992, p.

Proficient in: Importance Of Mass Media

6) In a three week period prior to the election these respondents were interviewed. The voter’s public agenda issues were measured by the survey question “what are you most concerned about these days?” This was interpreted as “What issues should the government emphasize more?” Out of the 100 voters, the five most common responses were law and order, foreign policy, public welfare, civil rights, and fiscal policy. The media agenda was made up of counting the number of news articles, editorials, and broadcast stories from the nine mass media broadcasters of Chapel Hill. Surprisingly, the results yielded in an almost perfect correlation between the rank order of the media agenda and the rank order of the public agenda. Thus meaning that the higher number of press a government issue had, the more the public voters ranked the subject being more important. Relating back to the statement of “Mass media doesn’t tell you what to think, but it tells you what to think about”, the voters were not told how to vote (hence they were undecided), but rather the media implemented on what topics to vote for. This can be seen as: the media telling the public what to think about.

Body 2
Furthermore, with the rise of television, radio, propaganda, and advertising, a counter argument may be created. The Hypodermic Needle Theory states that the mass media does tell you what to think. This theory suggests that the population is seen as a sitting duck. Mass amounts of ideas can be implemented straight into the population with the intent for a desired response. The population is sought out to be powerless, and have no choice but to accept the ideas. The people are seen as passive and believe what is told because it is the only source of information. In the event of “War of the Worlds” that was broadcasted on October 30th, 1938 as a hoax played a supportive claim to this theory. During the event, a broadcast on the radio was interrupted by a news bulletin. The audience was told that there was an alien invasion. Out of the twelve million people who heard the broadcast, only one million people believe it and or reacted to it. Scholars and theorist connect the hypodermic needle theory and this broadcast together. What makes this argument weak is that eleven million people did not react the way the media intended them too. 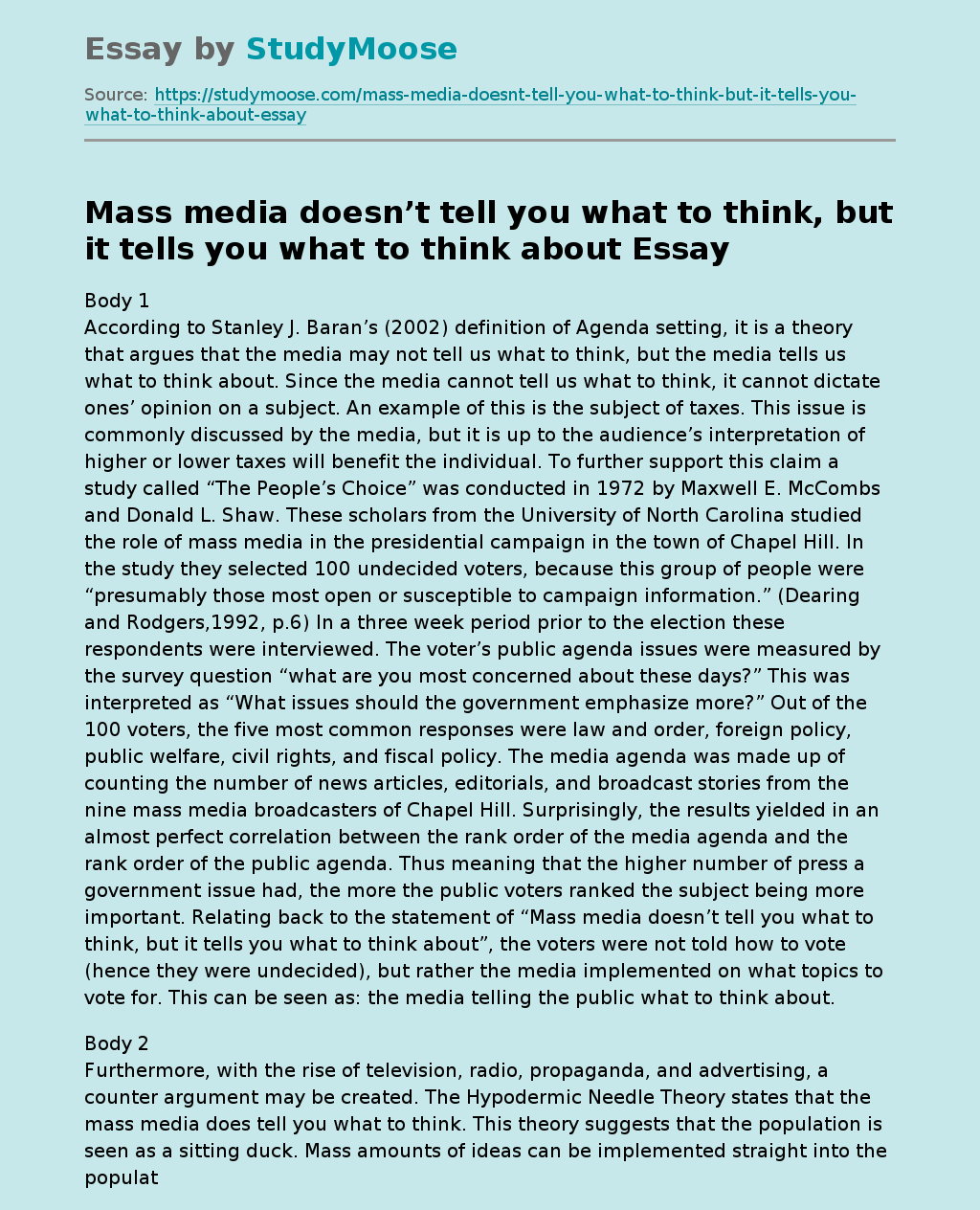