Of the great oral presentations this world has seen, many of them serve as an outlet for individuals to articulate their ideals and beliefs to a greater audience. The way in which great speakers such as Martin Luther King Jr and Abraham Lincoln do this is through speech elements such as rhetoric, language techniques, successful structure and also establishing a relationship with their audience. The speeches I have a Dream, and The Gettysburg Address [http://www.youtube.com/watch?v=kMMzY1KJVeo], although performed to entirely different audiences in different contexts, share similar values and qualities.

Don't use plagiarized sources. Get your custom essay on
“ Martin Luther King’s “I have a dream” and Abraham lincoln’s “Gettysburg Address” ”
Get custom paper
NEW! smart matching with writer

In order to gain a complete understanding of the distinctive qualities of the speeches we must first look at the context in which they were written.

On August the 28th 1963, Martin Luther King Jr stood before a congregation of over 200,000 people in front of the Lincoln Memorial. It was on this day that King delivered his testimony to mankind in an effort to end black segregation within America.

Despite strong opposition from the Kennedy Administration, King and his contemporaries continued with the civil rights march.

Standing on the same spot as Lincoln did five score years ago, King preached similar themes of justice, equality and freedom for man. Lincolns speech came as a eulogy to those lost at the battle of Gettysburg. At the time America was at civil war and the restless crowd was desperate for inspiration from their President. He was speaking last to a crowd of 15-20,000 Northerners to honour the dead and encourage them to keep fighting the war.

The context of each address has a profound impact upon their purpose and qualities. One distinct quality of Lincolns speech is that it was structured chronologically with each of the three separate paragraphs entailing the past, present and future. The lengths of the paragraphs can also be noted as a distinct quality of the Gettysburg Address, the first paragraph is quite small followed by progressive lengthening of the second and final paragraph. This is an instrument used by Lincoln to build up his audiences attention to the climatic end to his speech where he outlines what is required for the future. This can be compared to Kings structural approach, where he uses a ladder technique to configure his points in order of ascending importance. Once again ending strongly with the line: Free at last! Free at last! Thank God Almighty we are free at last!.

Rhetoric is often defined as the art of using language so as to persuade or influence others. From this we can deduce that it is a critical element of any effective speech. Certainly I have a dream and The Gettysburg Address contain powerful rhetoric techniques used to further communicate the ideas of King and Lincoln.

Kings speech is based heavily around repetition. He uses this in the lines, One hundred years later, I have a dream and Let freedom ring. All repeated to gain suspense from the audience as well as emphasising his themes of equality and justice. King says them with such authority and power to further drive home the importance of these themes. Using his voice to create a sense of urgency about the issue.

King also uses biblical allusion such as Gods Children and Psalm 23: Rise from the dark and desolate valley of segregation to the sunlit path of racial justice. This reflects his role as a Priest as well as giving evidence of Gods want of justice. The biblical allusions also give a sense of unity amongst the audience.

Establishing a rapport with your audience is central to communicating your ideas in a speech, both King and Lincoln do this exceptionally. Using inclusive language such as the words we and us, Lincoln especially is able to establish an equality throughout his audience with the common purpose of freedom and victory.

In his eulogy, Lincoln uses the line for those who gave their lives that the nation might live which again utilises the audiences patriotism to articulate his ideas through personification.

By referring to both Lincolns Emancipation Declaration and The Declaration of Independence he was able to strongly back up his argument and appeal to the nations Patriotism as well as give historical evidence to the slow progress of equality in America.

This would have a great effect on the proud Americans in his audience because a rejection of Kings values would ultimately mean for them a rejection of Americas traditional values.

Without proper delivery, these two speeches wouldve been overlooked in value and would not have had the great effect they did. I believe the values implied in both texts justified by both the context and the rhetoric.

Upon reaching conclusion, one realises that if not for great speakers and use of rhetoric, the ideas of significant historical figures could not be presented as well, as thus couldnt have the desired effect. Martin Luther King Jr and Abraham Lincoln were examples of this, men who, by use of manipulation of language and audience, changed the world.

Martin Luther King's "I have a dream" and Abraham lincoln's "Gettysburg Address". (2016, Jul 30). Retrieved from http://studymoose.com/martin-luther-kings-i-have-a-dream-and-abraham-lincolns-gettysburg-address-essay 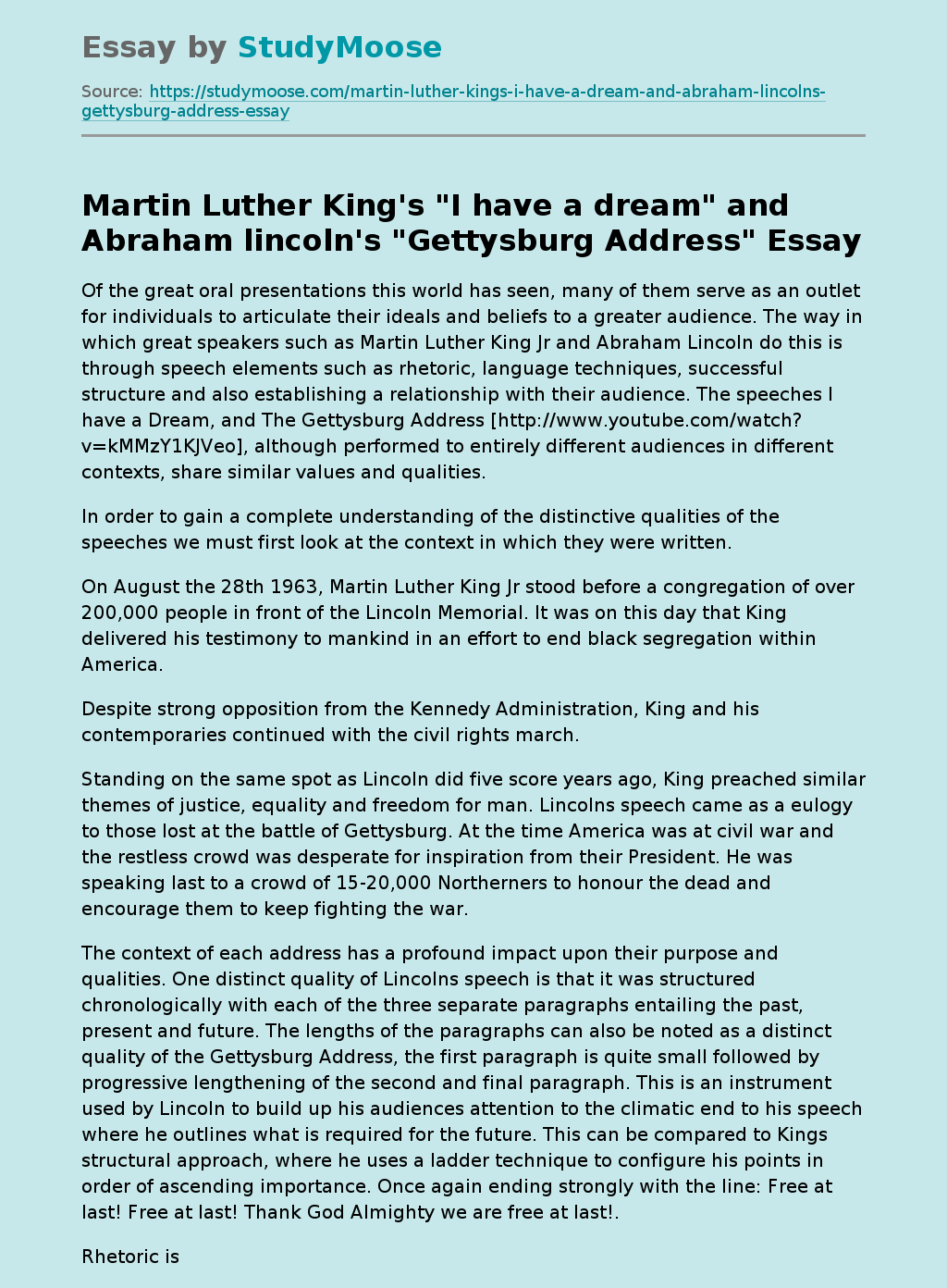