Prose Essay – How is the character of Scrooge influenced by the three spirits and how does Dickens use the three spirits to convey his message? Charles Dickens wrote ‘A Christmas Carol’ in 1843, which was published on December 17th of the same year. This novel of spiritual renewal received a joyful welcome from the public. Readers were moved by the story of the delightfully, yet despicable Scrooge, a heartless old miser who undergoes a miraculous rebirth at Christmas time, the only time ‘in the long calendar of the year, when men and women seem by one consent to open up their hearts freely’.

Don't use plagiarized sources. Get your custom essay on
“ Marley’s Ghost – ‘A Christmas Carol’ ”
Get custom paper
NEW! smart matching with writer

Dickens wrote about the society he saw around him, and so his inspiration for the didactic novel was the social divide between rich and poor. He chose to enhance this situation in his novel by setting it at Christmas, for this would have separated the rich and poor even more, especially in Victorian times. At the time ‘A Christmas Carol’ was written, the conditions for the poor in the Victorian era were awful.

The gap between the rich and poor was large not only in wealth, but also in rights. Working conditions for the lower classes were appalling, but the rich, all of whom enjoyed their life in luxury, had nothing to do with these problems.

Dickens did however. He didn’t agree with the social divide among rich and poor, and so chose to highlight this situation in this novel. The poor had diabolical living conditions as well as pitiful amounts of money and bad nutrition, and for all this, they had to do dangerous jobs.

They were treated with acts of cruelty, oppression and neglect, meaning many people died every night due to poor health. The reason Dickens had an obsession with the divide between upper and lower classes was because the author had experienced poverty first had, and therefore made his novels even more personal.

The structure of Dickens’ novel is abstract. For example, the title ‘A Christmas Carol’ is dramatically different from the mood the novel actually has. I believe that Dickens called this story ‘A Christmas Carol’ because it is a contrast from the main character; Scrooge, who is bitter and lonely; the complete antithesis to Christmas, and so catches the reader off guard, and consequently draws the reader into the story. The first stave is in first person from the view of the narrator.

Dickens did this because it sets the scene of the story, and also it describes the old miser Scrooge without the reader having to read on in the story to figure out the dead personality of Scrooge. The view of a narrator also involves the reader quicker. Also, halfway through the first stave, Dickens has started one paragraph with ‘Once Upon a Time’. This technique is used in fairytales, which re-enforces the fact that this is fiction, and also that this novel has a moral point, which all fairytales have. This technique also sets the effect that the story is only just starting, despite the fact that there are several paragraphs before it.

Those paragraphs now are represented as an introduction. This also indicates that you’ve got all you need to know about Scrooge to start the story. The staves in the novel also have a purpose, for example, the first staves acts as a prologue to the novel, and the fifth is an epilogue, the ending to the story. These two staves differ from the middle staves because they are the beginning and ends of the story, not the actual story, which is contained in the three middle staves, which see what the ghosts teach Scrooge. In the first stave, called ‘Marley’s Ghost’, Dickens creates an eerie atmosphere.

This is done through repetition, like when Dickens describes the weather as ‘cold, bleak, biting weather’. Also, Dickens uses ‘pathetic fallery’, which is when the weather gives the reader a clue about what is going to happen, and also reflects the atmosphere. Examples of this figurative language are; ‘fog came pouring in at every chink and keyhole’, and ‘the city clocks had only just gone there, but it was quite dark already’. These examples of pathetic fallery set an eerie atmosphere and also prepare the reader for the ghosts.

The character of Scrooge in the first stave has been described by Dickens to make the reader have a certain feeling about him. The reader is made to feel that Scrooge is a bitter old miser who cares for nothing but his money. This is because the word ‘sole’ is repeated for effect and emphasizes how alone Scrooge is, and how lonely him and his best friend were, but then it goes on to describe how Scrooge is not that upset at his best friend’s funeral, and that he gets a good business deal on the same day, showing that he is cold and lonely.

Figurative language is also used to describe Scrooge as a self-contained, secretive old man, by using similies like ‘as solitary as an oyster’ and ‘as hard and sharp as a flint’. Also, the repetition of vocabulary, like the similies, builds on the effect that Scrooge really is horrible. The first stave also describes Scrooge as being dead, not physically, but spiritually and emotionally. This is portrayed by Dickens by using language like ‘No warmth could warm, no wintry weather chill him’, and ‘the cold within him froze his old features’. 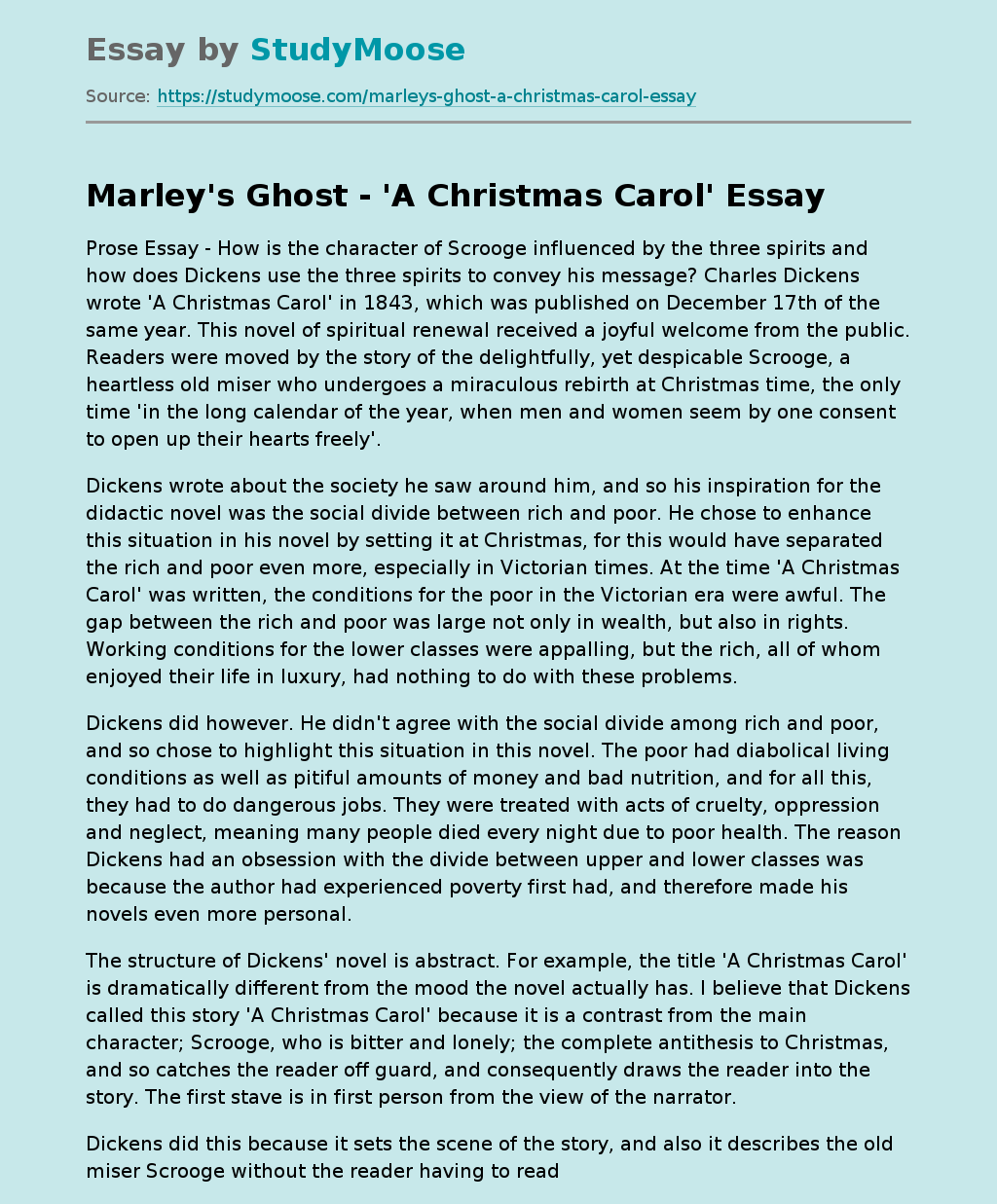