Founded in 2010 in Beijing, Xiaomi first began by launching custom Android-based firmware- MIUI. Backed by tech savvy early adopters and enthusiast, it thrived on feedback to improve usability. A year later they entered the hardware market with their flagship phone, the Mi One which featured the top specifications at a low price. Today, Xiaomi has launched it’s 4th series of their flagship phone the Mi 4 and have expanded their product line to mid tier smart phones, smart TV, routers, set-up boxes and other accessories.

Don't use plagiarized sources.
Get Your Custom Essay on Marketing mix success of Xiaomi Just from $13,9/Page

Introduction
This essay will discuss the marketing mix, a combination of marketing tactics which consist of four elements known as the 4Ps- product, price, place, and promotion that is derived from the marketing strategy of the company (Kotler and Armstrong, 2012) and the efforts made to adapt each mix to reach it’s intended audience in a foreign market.

Price
Xiaomi aims to provide similar specifications phones to competitors but at a much lower price. Currently they offer 2 series of flagship phones, the Mi and Redmi (or Hongmi). The Mi 3 has specifications that is similar to Sony’s Xperia Z1 that is priced only at CNY 1,999 (USD$322.62) as compared to Z1 retail price of USD$935 (Appendix C). The Redmi series, a mid tier range is priced at CNY 799, targeting the lower income in emerging markets such as China, India with plans to expand into Brazil and Mexico.

As the first company with such an aggressive penetration pricing strategy, Xiaomi changed the perceived value of smart phones (Ramesh Kumar, 2007). Anticipating that consumers would be skeptical about the quality of it’s low priced Redmi series, Xiaomi chose to first launch their top tier Mi before launching Redmi in each new market so that the reduction in market price would not be too drastic and that consumers could gain confidence in the quality (Snoj, Pisnik Korda and Mumel, 2004) of it’s Redmi series.

Product
Unlike other phone manufacturers that make their products obsolete with product refreshes within a year, Xiaomi’s phones have a longer product life cycle of 24 months. As the product enters the maturity stage, volume sales starts declining. Yet from a technological standpoint, Moore’s law dictates that a longer product life meant that it’s cost to manufacture the same product becomes lower. This decline in volume sales profit will be counteracted by a higher profit margin achieving overall profit sustainability.

Similar to Apple & Amazon, Xiaomi has developed an ecosystem of software & services such as cloud service, messaging app, theme store and app store which preloaded to it’s custom firmware. An integral part of this ecosystem is

Mi Market (app store) since Android’s default app store is not accessible in China. China’s market for apps has fragmented into many app stores birthed from startups to the likes of search giant Baidu. Thanks to the popularity of Xiaomi’s phones, Mi Market is currently one of the largest app stores in China.

Place
To eliminate the cuts that retailers and distributors would get, Xiaomi has sold their products entirely online, on their own website. However since expanding into new markets, Xiaomi has more recently adopted a horizontal marketing system to build upon retailer’s expertise in the region. In India, Xiaomi chose a partner to sell exclusively through Flipkart, India’s largest e-commerce company.

Xiaomi needs to understand the local distribution methods in order to mitigate the loss of potential customers especially when they employ exclusive distribution which would impair the availability of their products (Pride and Ferrell, 2011). For instance, due to purchasing behavior, cash-on-delivery remains as one of India’s primary mode of payment. Buyers would perform an inspection of the product before payment. In short, accounting for less than 1% of the total retail market, e-commerce is still in it’s infancy stage in India.

As Xiaomi’s mobile phones shifts into the maturity or even decline stages of its product life cycle, it might want to employ selective distribution through traditional brick and mortar stores. Bilgin and Wührer (2014) points out that products not adapting to maturity stages will find themselves soon in the decline. In order to prolong it’s product’s life, Xiaomi should change their distribution strategy. Though it may not be economically feasible to sell their phones with thinner profit margins or perhaps even selling at a loss, it should be noted that Xiaomi’s goal is to make profits through services and apps rather than purely hardware sales- similar to the relationship between printers and ink cartridges (Appendix D).

Promotion
Releasing fixed amount of handsets at specific times, Xiaomi primarily engages in flash sales for new products that often results in phones selling out within seconds. Xiaomi meticulously limits supply to artificially create more demand than supply- a strategy known as “hunger marketing” (Chen et al., 2014 p. 1950-1957). “Hungry” consumers through word of mouth created buzz which in due time transits into hype where consumers mimic one another in the buying craze (Mourdoukoutas and Siomkos, 2009 p. 82), further raising demand.

In Xiaomi’s advertisements, it is evident that marketing messages are focused on hunger marketing. There is always emphasis on how fast their products have been sold (Appendix D) , editorial tone that communicate a sense of urgency (Appendix E), statistics to provide an impression of popularity (Appendix F), and multiple teasers for product launch over a period of time to create hype (Appendix G).

Conclusion
Xiaomi’s marketing mix is a combination of both Apple’s strategy of producing high quality products and limiting supply to magnify consumer hype as well as Amazon’s kindle strategy of making products as widely as possible and to profit primarily from its services.

Though Xiaomi has seen exponential growth in retailing smart phones, it’s key focus should remain in distributing mobile applications and services while maintaining the quality of smartphones instead of diversifying into other electronics. Without the access restrictions in China, Google remains dominant for app distribution as well as its services which are preloaded to every Android phone. Xiaomi must continue to innovate and integrate it’s solutions and services even tighter to it’s own firmware to remain competitive and profitable. It needs to pry it’s customers away from the many alternatives available in the heavily saturated mobile app market perhaps through technological acquisitions or strategic partnerships.

The Beijing-based company sells its products exclusively online through Flipkart, one of India’s largest online retailers, via flash sales at specific times. The phones are sold at close to the manufacturing cost, with Xiaomi making profit through services such as mobile applications. Xiaomi has used the sales tactic in other countries, as well.

Analysts say Xiaomi is taking off in the world’s second-biggest telecommunications market because Indians see value in its low-cost products. Word of mouth has created a buzz surrounding the brand, and the flash sales help create a scarcity of the company’s products.

“The way they carried out their PR was key to the success,” says Karan Thakkar, an analyst with research firm IDC. “With the flash sales they have created a competitive spirit among the consumer.”

While Xiaomi’s market share isn’t yet known, IDC says competition among companies selling low-cost smartphones is expected to increase in the coming quarters thanks to similar low-cost makers, such as Mozilla, which offers a $33 smartphone. Indeed, smartphone sales in India should double through 2018 as devices priced below $200 enter the market, IDC says.

“Selling for PR is different from selling for business,” Micromax Chief Executive Vineet Taneja told media at a launch event for a new phone last month.

Micromax, India’s second-biggest smartphone seller by market share after Samsung, sells about three million phones every month through its 130,000 outlets spread across the country.

But that hasn’t stopped Micromax from adopting an online sales model. In September it began offering one of its devices on Snapdeal.com, a Flipkart rival. 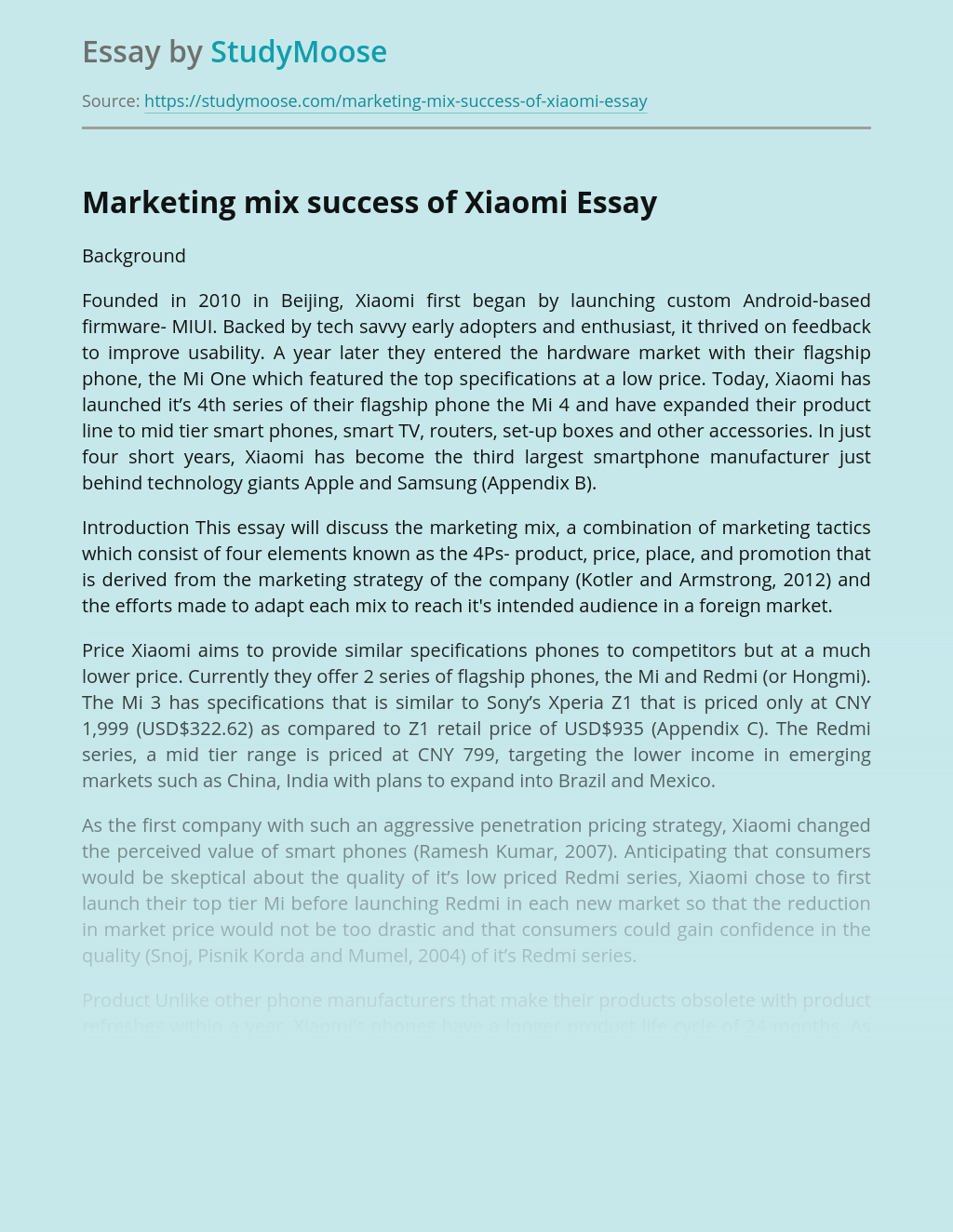 Rate this post The Beach Carrier is a new product principle established by Mary Ricci. It is a large, lightweight, long lasting bag that is created to carry whatever required for a day at the beach, including a chair. The Beach Provider can be folded down to a 12-inch by 12-inch square for easy storage...

Rate this post 1.0 Introduction In this report I will be analyzing a case study on Tupperware. I will be identifying the main problems faced by Tupperware and recommending solutions that could be used to help Tupperware. Tupperware was developed in the 1940’s by Earl Tupper. They consisted of various types of plastic containers used...

Rate this post As I get further and further along in this simulation, I have noticed that I am beginning to understand what it takes as a marketing manager in order to be successful. Careful considerations must be made to be sure that the right decisions benefit both Minnesota Micromotors, Inc., and our customers. Our...

Rate this post 1. Executive Summary 1.1 Synopsis of the Situation The history of Angostura aromatic bitters approaches the year of 1822, when a cholera epidemic whipped the population of Angostura in Venezuela, when the young doctor Johann Gottlieb Benjamin Siegert created a somewhat bitter medicine, quite unusual taste, but of proven volatilities effectively relieve...

Rate this post Born and raised in Los Angeles, Paige Premium Denim is one of the world’s leading denim brands with its signature “perfect fit” and unmatched variety of styles that flatter the body. Paige Premium Denim was founded in 2004 by fit model Paige Adams-Geller on the principle that you don’t have to be...