In Greek mythology there was a Roman athlete named MILOn who was famous for his feats of strength. Legend has it that he once carried a four-year-old bullock through the stadium in Olympia, Greece! You may not grow as strong as Milon by drinking MILO, but it is a very tasty way to get many of the nutrients you need to grow strong.

‘Milo’ the energy drink nestled into the Indian market in 1996. The responsibility of launching the drink in a market dominated by time tested Bournvita and Boost was no easy task for Nestle.

Don't use plagiarized sources.
Get Your Custom Essay on Marketing Mix (4 P’s) of Milo Just from $13,9/Page

Being the fifth player in the brown beverage market, the drink was up against Bournvita which had an enviable market share of 40% and SmithKline Beecham, a strong contender, especially in the south. After establishing Milo as the world’s number one energy drink and its taste benefits, the attention shifted to presenting its emotional benefits too.

The focus was now on revamping the brand image from being a tasty energy drink to one that provided extra energy to ‘win’.

New Milo is for active, growing children its energy releasing B vitamins give them the extra energy, vitality and stamina that make them winners. Milo, the chocolate milk beverage targeted essentially at teenagers in the urban marketplace is the fastest selling product here. The only surprise finding being that instead of growing up kids, senior citizens like to have it everyday with their glass of milk.

Milo now has Actigen – E which consists of

Vit B1 (Thiamin)helps the body release energy from carbohydrates during growth and muscle Vit B2 (Riboflavin)helps body release energy from protein, fats and carbohydrate metabolism, helps improve athletic Vit B3 (Niacin)associated with the catabolism of nutrients and the production of energy Vit B5 (Pantothenic acid)essential in the metabolism of protein, fats and carbohydrates release of energy Vit B6 (Pyridoxine)together with related compounds, cofactor the enzymatic conversion of amino-acids and glycogen Vit B8 (Biotin)required for specific enzymes involved in energy metabolism to function Vit B12 (Cobalamin)helps keep cells in the circulatory, nervous and digestive system in good working condition, regulates the body’s oxygen at a level that promotes release of energy Vit C (Ascorbic Acid)increases the absorption of dietary iron from the intestine to the body Ironessential for transporting oxygen from the lungs to the tissues for storage: significant in the oxidative production of energy Calciumessential in cellular metabolism, involved in muscle contraction, transmission of impulses in nerves, blood clotting mechanisms and enzyme activation Magnesiumneeded for over 30 enzyme system in the body to function effectively, necessary in both anaerobic and aerobic energy generation Phosphorouscrucial in the metabolism of all major metabolic substrates; co-factor in a variety of enzymes and is the reservoire for metabolic energy Promotion:

Using the consumer insight that mothers are driven by a need to support their sons’ hard work and help them succeed when under pressure, the agency launched an impressive ad campaign. The research following the campaign revealed the need for Milo to be perceived as a drink with 2 strong deliverables- Energy and Taste. Thus a strategy was adopted wherein the agency targeted children belonging to the age group of 7-12 years and through them their mothers. The strategy worked and led to a 40% volume growth, with the market share growing to 8.8%. The agency came up with commercials addressed to children as the target audience and mothers as the secondary audience. The campaign proved to be successful with the drink emerging as the No. 2 brand in 3 out of 4 zones, and its market share growing to an impressive 11.4%.

Not satisfied, the agency undertook another research, which revealed two issues that needed to be addressed immediately. Firstly the pester power, which in this category was not very high and secondly, the fact that Milo’ s brand promise of winning was unfortunately being perceived as an advertising/ marketing claim. Hence Nestle embarked into yet another campaign, this time with the intention of improving the brand image by overcoming a mother’s apprehensions and getting her to subscribe to the brand promise. Other than that it takes an active part in the sponsorship of sports event at both school & colleges, they also distribute T-Shirts having Milo logo and other such apparel. This helps company to promote their product as well as build their Brand Awareness.

Distribution is the most important thing next to sales. Sales are not possible if the distribution network is not effective. If the product is not available in the market at the right time & at the right place the customer may switch to another product which can be a great loss the company.

Taking competition into consideration Milo provides its product at an affordable price to the customer than any other HFD in the market and no compromise on quality is made. Because of such competitive price it is also catering to the middle class & lower middle-class.

Milo comes in an attractive Box pack which is green in color which is very attractive and eye catching other than that it is light weight as compared to the bulky glass jars of other companies, and it is also convenient to store & handle. With glass jar there is always a chance of breaking and harming the child if he tries to have milk on his own. But the packaging of Milo is so convenient that a child can easily prepare his own milk preparation and have it whenever he wants. 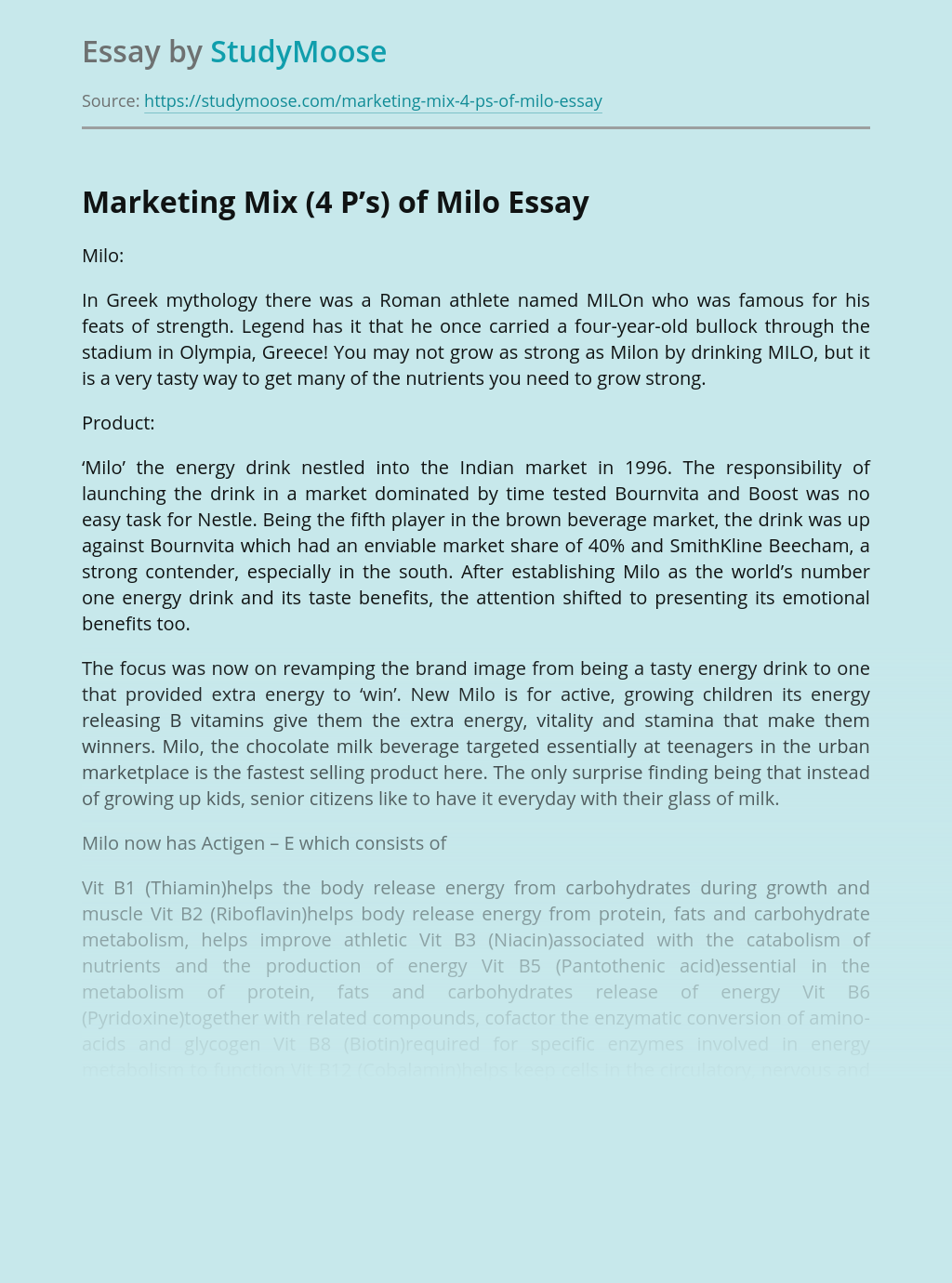 The prospects of the effectiveness of marketing methods to promote tourism destinations could spell a huge difference, if done with careful planning and research. Tourism demand evolved rapidly in the 1990s altering conventional wisdom and changing a whole range of factors influencing tourism planning and management. Attempting to interpret tourism phenomena and forecast the future... VIEW ESSAY

Warby Parker just sold its 500,000 pair of eyeglasses. This may not seem like much to industry giants like Luxxotica, who owns Ray Ban and Oakley, but it’s a milestone Warby Parker is happy to celebrate. To understand why Warby Parker is excelling, we must first examine their marketing mix. Like a good recipe, if... VIEW ESSAY