The Marketing Mix At Haagen-Dazs - and Beechdean Dairies

In 1990 the US company Haagen-Dazs appeared in Britain and created something which had never existed before: a mass market for luxury ice cream. These days British consumers spend £130 million on luxury ice cream each year.

“The Marketing Mix at Haagen Dazs” explores how Haagen-Dazs made themselves the market leader. It also compares and contrasts their marketing mix with Beechdean Dairies – a tiny UK ice-cream maker with big ambitions – it wants to be the Haagen-Dazs of Britain.

Haagen-Dazs’ success has brought it a horde of competitors in Britain.

Don’t waste time
Get a verified writer to help you with The Marketing Mix At Haagen-Dazs – and Beechdean Dairies
Hire verified writer
$35.80 for a 2-page paper

Mars and Cadbury are among the latest companies to make a play for a share of the market. But its biggest challenge remains fellow US company Ben & Jerry’s. Beechdean is one of its smallest competitors. Without the huge marketing budget of Haagen-Dazs or Ben & Jerry’s, Beechdean relies on word of mouth to find a niche within a highly lucrative market.

In marketing ice cream, creating a brand is very much about creating a fantasy.

It’s about linking the product with emotions, images and values. Haagen-Dazs’ brand is based on sexual fantasy and “shared indulgence”. Beechdean, by contrast, bases its brand’s fantasy on the farm – a sense of freshness and personal care for the customer.

Haagen-Dazs has a new advertising campaign designed to appeal to consumers who, it believes, are less materialistic than in the past. Having formulated their new approach, the company are spending £8 million on it, with £300,000 alone going on two television adverts.

But the adverts, about someone in search of therapy, have their critics.

Meanwhile, Beechdean hasn’t the funds to advertise on television. They turn to guerrilla marketing to promote themselves. They run two cars at motor races, which enables them to entertain their big customers, as well as getting their name known.

The five major supermarkets dominate the marketplace for ice cream, and Haagen-Dazs has a major presence. Beechdean, on the other hand, is sold mainly in theatres and at special events. To get a place on the supermarket shelves would be a huge leap for the company. And if they grow too big too fast, they fear they will lose the factor which made the company special in the first place – the passion and commitment of its owners.

Proof Of The Pudding

People say that within the luxury ice cream market there really isn’t much difference in flavour between brands – it’s all in the marketing. But when people taste three luxury ice creams without seeing the names, the results suggest otherwise.

“I used the video to prepare year 11 students for their Business Studies GCSE exams last year and found it very valuable. This was vital, as access to food production is very limited in our area. It also saved time on researching the product and the market. The video is also in use by the D&T Food technology department.” Caroline Griffiths, Business Studies Dept., Tenbury High School, Worcestershire

The Marketing Mix At Haagen-Dazs - and Beechdean Dairies. (2016, Jul 03). Retrieved from http://studymoose.com/the-marketing-mix-at-haagen-dazs-and-beechdean-dairies-essay 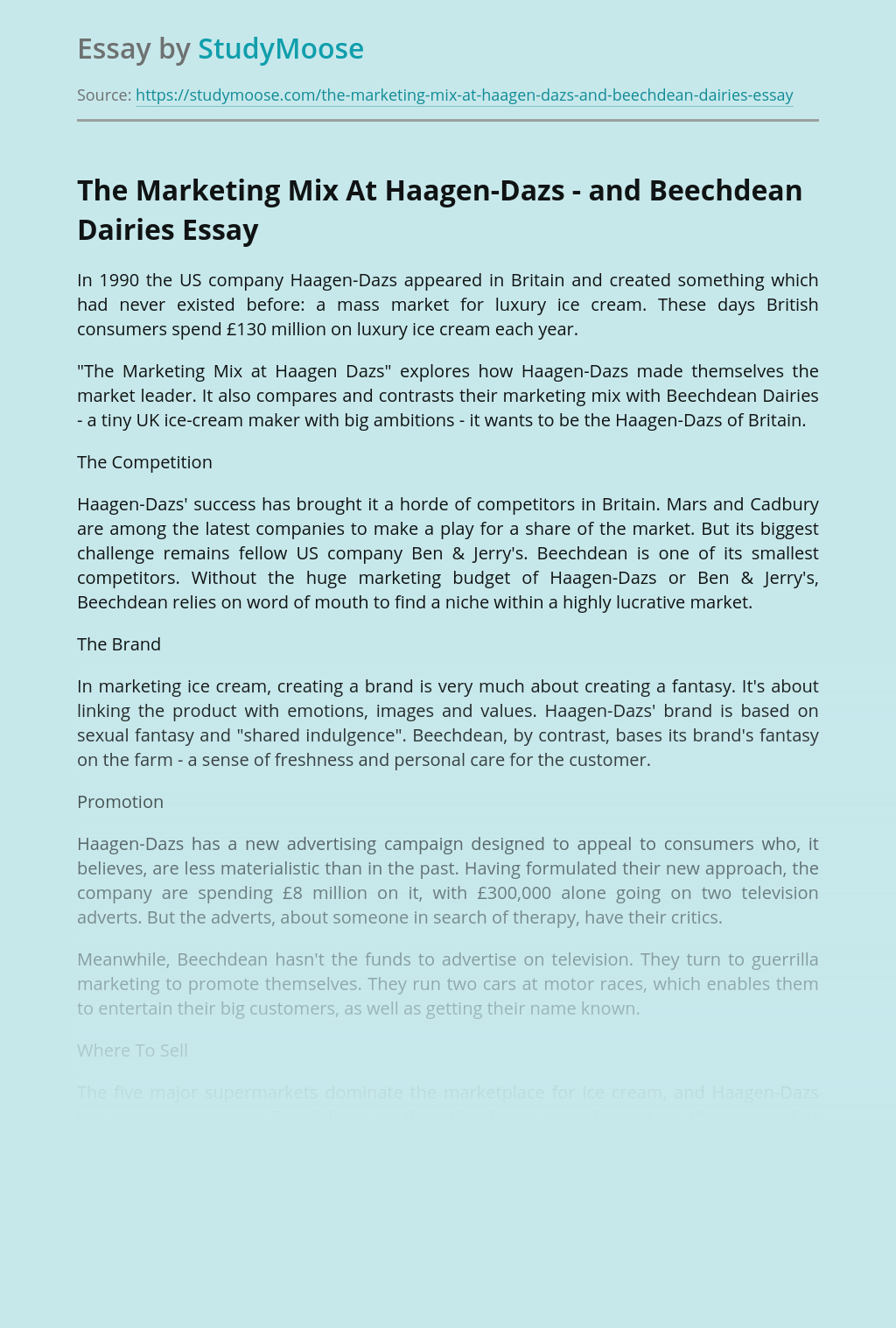 Don’t waste time
Get a verified writer to help you with The Marketing Mix At Haagen-Dazs – and Beechdean Dairies
Hire verified writer
$35.80 for a 2-page paper
Stay Safe, Stay Original