Haagen-Dazs ice cream as the world’s leading forest brand, and the name gives peoples the concept of super premium ice cream valued at premium prices, this is the reason we choose the product. Our main aim is learn Haagen-Dazs’ market strategies, how they segment and position the market.

This report use secondary research. In this report, Haagen-Dazs is seem as five macro environmental forces impacting the company’s environment, they are political, Legal, sociocultural, economic and technological. The marketers of Haagen-Dazs have tried geographic, demographic and psychographic segmentation to find out the best method to market structure. Haagen-Dazs is belonging to brand competition and the aim target consumers are the youngers are examined in depth in this report.

Variables Segmentation variables are characteristics that buyers have in common and that might be closely related to their purchasing behavior.

Age, gender, income and occupation, can all be linked to the purchase or consumption of particular products (Elliott, Rundle-Thiele & Waller, 2012, p187). The marketers of Haagen-Dazs have tried different market segmentation variables to find out the best method to market structure. The characteristics that used are geographic, demographic and psychographic segmentation.

In 1983 Mr. Mattus agreed to sell the Haagen-Dazs brand to The Pillsbury Company and Haagen-Dazs ice cream was founded. Since then, it has become a global phenomenon, available in 50 countries. Haagen-Dazs has franchises throughout the United States and many other countries around the world (Haagen-Dazs, 2013). Like Singapore, China mainland, HongKong, Taiwan, Japan. Geographic segmentation divides the market into different geographic units, such as nations, regions, countries and cities. In Singapore, Haagen-Dazs has 11 branch and outlets. They are located in high traffic area or shopping centres where customers can be reached easily.

Demographic segmentation is market segmentation based on demographic variables, which are the vital and social characteristics of populations, such as age, gender, family size, family life cycle, income, occupation, education, religion, race, generation, and nationality (Elliott, Rundle-Thiele & Waller, 2012, p189). The marketers of Haagen-Dazs focus on age, gender, ethnicity and income to segmentation the market.

Age is one of the most commonly used segmentation variables, it is a clearly variables to position the market. Haagen-Dazs aimed on the age that are from 6-18 years and 19-40 years, from children to teenager and to adult. The group they focus most is adult. Do not assume that ice cream is only interested by children or teenagers. It could attract adult also, which is depend on what market strategy you use. Haagen-Dazs were the pioneers in the market for creating distinctive and indulgent taste experiences by marketing to an untapped segment – the adult ice cream lovers (Haagen-Dazs, 2013). For instance, children like cakes and some young people like sorbet. Most adult like yogurt because of it is helpful for their body. In addition to ice cream, Haagen-Daze produces ice cream bars, ice cream cakes, sorbet, frozen yogurt and gelato.

Haagen-Dazs splits the market into groups based on income also. As we know, the price of Haagen-Dazs is more expensive than other ice cream brand, the reason is they provide high quality ice cream. Therefore, the price is reasonable to consumer who has a higher disposable income. Haagen Dazs marketed as a “super-premium” brand (Brand eating, 2013), so consumers should have a high purchasing power.

Nationalities is a useful segmentation variables for marketers of some products. Different nationalities have different cultures. Therefore, needs are differences, especially in foods. Observing carefully the socio-cultural, Haagen-Dazs provided different special products in different countries. For example, there are a lot of traditional festival in China and Chinese regions. According to this, Haagen-Dazs promoted the ice cream mooncake in Chinese regions during the Mid-autumn Festival.

In addition, gender is considers as one of the important factors when marketers of Haagen-Dazs target their customers. As a result of female more prefer to eat dessert, female consumers are the main group of customer. Based on this, Haagen-Dazs is easy to promote their products for female consumers.

Psychographic variables are based on consumer characteristics. With Singaporean becoming more wealthy, they have a high quantity and expectation of life. They tend to spend more on luxurious and emphasizing on a healthy lifestyle. Therefore, Haagen-Dazs can complement the trend in coming up

Although the Haagen-Dazs ice cream as the world’s leading forest brand, it also faces intense competition in the market. The presence of Seven-Eleven, Cold Storage, NTUC and other supermarket offering a variety of ice cream in tubs. These supermarkets and retail store provide a good place to sell products and it is more convenient for consumers to purchases. On the other hand, it is more challenge for Haagen-Dazs, the reason is supermarkets sell ice cream of other brand at the same time. A variety of ice cream that consumers can choose, what Haagen-Dazs sell is not only the product, but also the brand.

There are two main competitors to Haagen-Dazs, Ben & Jerry’s and Nestle. Ben & Jerry’s is a U.S. ice cream brand and created by two childhood playmates Ben Cohenand Jerry Greenfield, to taste new flavors mellow and well-known (Ben & Jerry’s, 2013). Nestlé is the world’s largest ice cream company. Nestle always get innovative ideas, and for the international market transformation, to create is different flavor (Nestle, 2013). Haagen-Dazs as a leader in high-priced ice cream market, compared with its main competitors, its competitive advantages are due to its ingredients and accurate market positioning (Appendix 1).

In order to maintain its competitiveness, Haagen-Dazs has to capitalise on its marketing strategy and provide even greater customer value and satisfaction than its competitors to target customers.

Haagen-Dazs the aim target consumers are the youngers who are fashionable. They should in the income pyramid peak also. From the Haagen-Dazs market analysis (2013), the core target is young people and age is 20-30 years old. They are middle-high people who can afford it. Haagen-Dazs’ large target is from 15 to 59 years old, both men and women. It is for people who are looking for pleasure and are attracted by explorating new flavors and sensations.

The young people who are 20-30 years old, they pursue a healthy lifestyle. Although, young adults are interested in desserts, they also prefer natural and low fat substitutes. In order to increase the consumer market, Haagen-Dazs promote the fat-free ice cream with high calcium and protein. Such as low fat yogurt products, which is emphasis of healthy lifestyle and living.

The large target of Haagen-Dazs is from 15 to 59 years old, and it is a wide range. Therefore, taste is an important factor to consider when consumers purchase ice cream. Haagen-Dazs offer many flavors of ice cream, which are designed to meet the needs of different tastes. Furthermore, product diversity is also a necessary factor to attract consumers. Haagen-Dazs promote mini ice cream for kids, family package for the busy parents to buy it home. Haagen-Dazs’ purpose is bring customers to enjoy the extraordinary taste. In terms of competition, for the reason why Haagen-Dazs maintain excellent results in the fierce competition is because it not only represents a product, it also stands for a lifestyle. 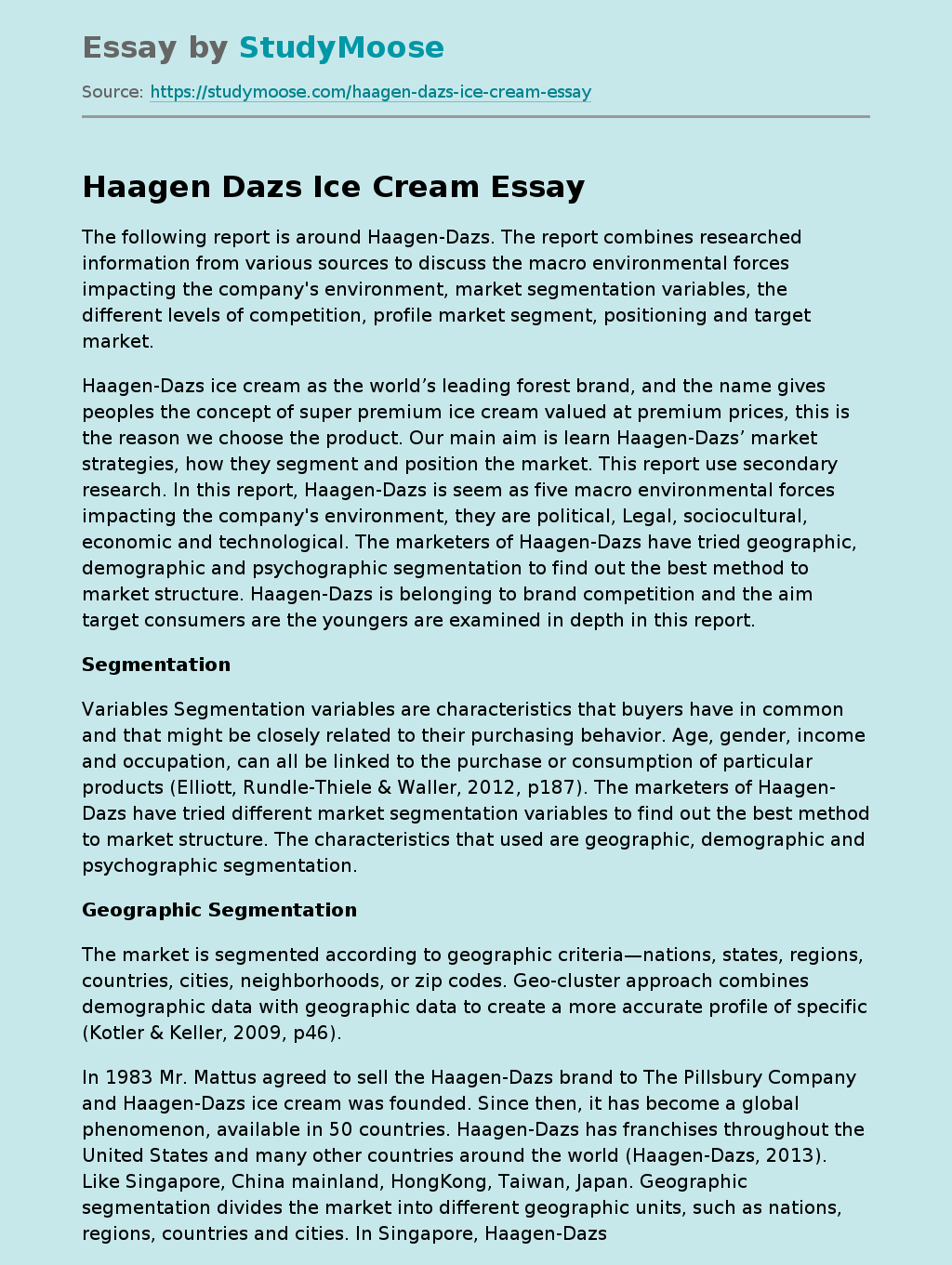