Passenger Motor Vehicles can be segmented in various ways according to five major segmentation variables including geographical, demographical, psychological, benefit and behaviourial. The traditional way of segment the car industry is shown below:

All those segments are companied with other factors include price, image and the amount of extra accessories. These market segments have different brands competing against each other and Daimler Chrysler’s Mercedes-Benz is under the luxury segment of the market, while having competitors such as Jaguar and BMW.

Many brands of cars are designed to appeal to specific age groups or family-size categories. For example, Suzuki Samurai appealed to the young generation while Mercedes-Benz appealed to 30-45 age group people. General Motors also uses age and income as their basis for segmentation for a very long time. The household income ladder was divided into five segments, served by Chevrolet, Pontiac, Oldsmobile, Buick, and Cadillac (www.knu.edu.tw).

Behavioural segmentation is used to divide the market into groups according to occastions when buyers get the idea, make a purchase or used a product (Kotler, et.

al 2001, p.167). In Europe, automobile manufacturers introduced “minicars”, developed exclusively to commute in cities, (e.g., Renault Twingo, Fiat Cinquecentio). Other behavioral variables have also been used in automobile industry to segment international markets. For instance, attitudes towards cars differentiate car fans from people who consider cars a commodity. Loyalty status also distinguishes customers based upon their loyalty toward a brand or domestic preference in cars (www.knu.edu.tw).

Psychographic criteria are the most important elements for segmenting car buyers. Cars like clothing are the most common ways to affirm social status, reflect personality, and lifestyle. As Gallup Jr. and Newport (1991) indicated, people use cars as symbols of their self-concept. European manufacturers, including BMW, Mercedes-Benz, Volvo, make use of more psychographics to meet the “emotional needs of emerging customer groups” (www.knu.edu.tw).

One of the most significant political variables is international trade policy. For example, imported cars are often regulated; in the first stage of international market segmentation, car companies have to integrate this constraint. Among other socio-economic variables, income per capita (IPC) is particularly relevant since cars are an important part of household budgets; as that a car contains ongoing tax, road registry cost, fuels, etc. Cars seem to fall into the category of culture-free products. During the last decade, European, American, and Japanese designs and level of quality have become more and more similar, suggesting that cars may transcend cultural differences (www.knu.edu.tw).

Daimler Chrysler has chosen a market segment where buyers have distinctive preferences, special requirements and unique needs. Although they only share a small market of the total motor vehicles market, they have served their target market better than these rivals do.

4.4 Differentiation between each segment

There are as shown in figure 1, seven major segments in the car industry. The mini segment is based heavily on demographic and benefit variables; it provides convenience for those buyers with the need to drive around in the city or just from point A to point B as well as affordable in price. However, this segment has very small share of the total market and people usually think that the car is too small for general uses.

The small segment is one of the two largest segments, many first-time car buyers tend to go for this segment and cars in this segment has variety of choices as well. It holds high market share especially in the European countries such as Germany and France.

The medium market has a large share of the total car market as well. However, it is very competitive, many mass-producers are competing against each other in this particular market. This market concentrates mainly on family and couples that takes up large part of the car buyers.

The Large segment consists of buyers who look for power, excitement and they are usually family orientated. The amount of share this segment have has grow significantly especially in the US market.

The executive segment is a relatively small part of the car market with less than 10% share in European countries. Mercedes-Benz is the dominant player, with almost 40% of the total market segment. BMW and Volvo are the other significant manufacturers. Ford and GM participate in this segment too. GM has share of this market with Omega model, and Ford with its Scorpio, but in general, they are regarded as minor players. This particular segment targets at high-class people with distinctively high social-reference group and has relatively high income.

The Luxury segment is the smallest of all segments in the global car market. However, it is a very prestigious and profitable segment and thus it is highly important to the manufacturers. The market leader in this segment is Mercedes-Benz. The largest market by far is Ger-many, accounting for over half of all luxury cars sold. This segment also target at high class people with relatively highly respect occupation and usually like to be noticed and seem differently.

The sport segment is a small niche in car market. Major player like Ford and GM have developed sports cars from time to time to complement their standard range. In this section, the design of the cars is very important and attracted to more and more customers’ attention. Therefore nearly all the big companies are have product in these segments. The long-term growth of this segment is secure due to changes in the lifestyle and an in-crease in discretionary income. This segment is based heavily on psychographical factors. People in this segment tend to be ambitious, stylish, and sporty. They seek excitement, thriller and passion. 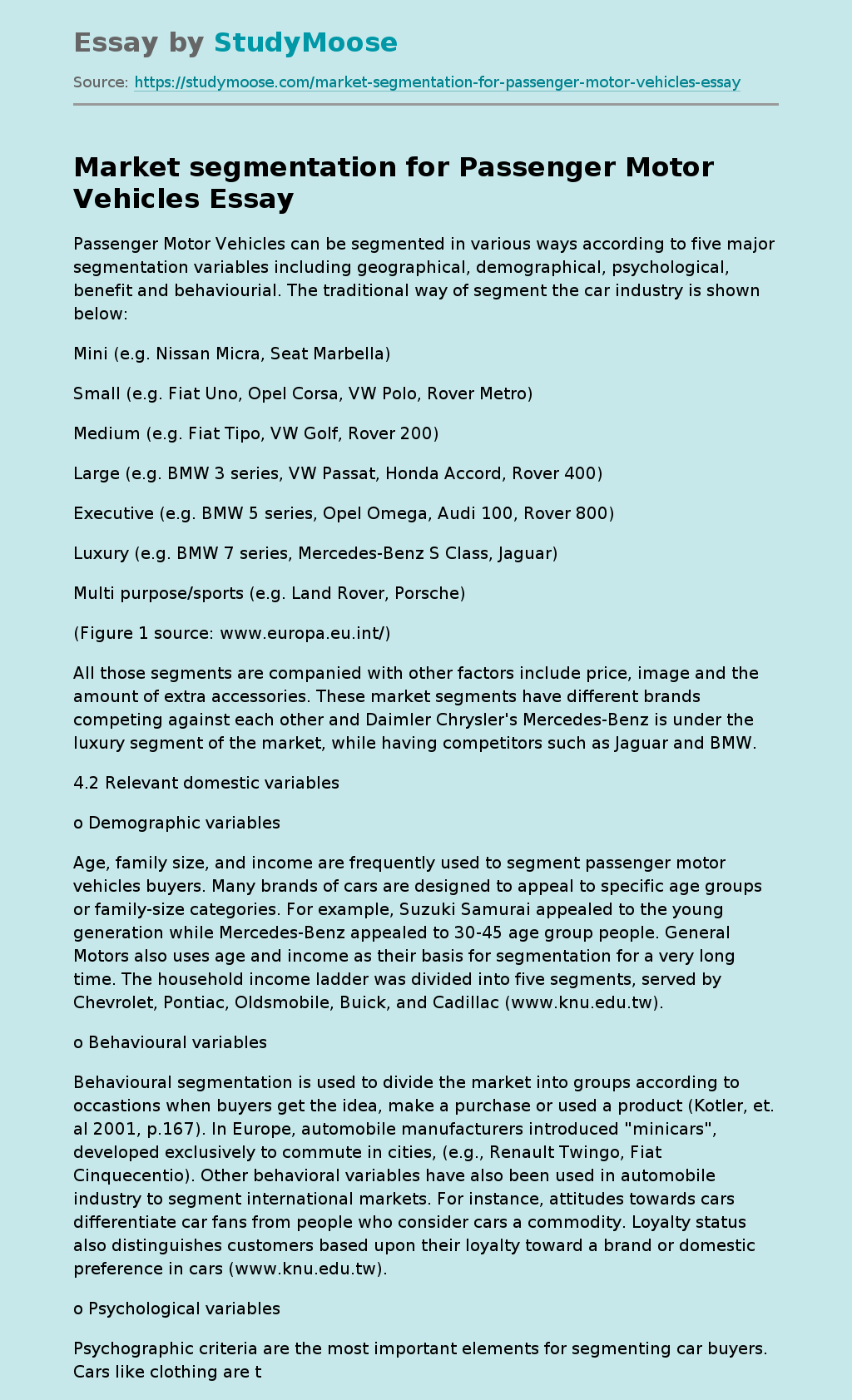