Marilyn Monroe was a popular actress during the 1950’s. She was very interested in the world of acting and determined to be a part of it. The first thing I found when I research her was that, as a young child so faced many difficulties. But with courage, and hard work she was able to live her lifelong dream. Her dream was to reach the people, to let them know just how wonderful and amazing it could be to be a part of someone else stories.

Don't use plagiarized sources. Get your custom essay on
“ Marilyn Monroe Early Life and Career ”
Get custom paper
NEW! smart matching with writer

Marilyn was born on June 1st, 1926 in Los Angeles, California as Norma Jean Mortenson-Baker. Due to mother, Gladys Pearl Baker, being unable to care for her (mentally, and financially) young Marilyn was placed in many foster homes. Eventually, when her mother got back onto her feet she was able to take 7 year old Marilyn back into her care. Sadly, it didn’t last long. Her mother was still mentally unable to care for her, instead her mother’s best friend, Grace Goddard, took her in.

She was the one to encouraged Marilyn to act. Due to some issues Grace decided to place her in the Los Angeles Orphans Home in 1935. Marilyn was in the orphanage for only two years, because Grace took her back in(1937). Unfortunately, Marilyn was molested by Grace’s husband for many years when she returned, until she had two choices to choose from–get married at 16, or go back to the orphanage. She decided to get married to a neighborhood friend, 21 year old, James Dougherty, but they got divorced not long after.

Marilyn took this opportunity to go and study at the Actor’s lad in HollyWood to learn about acting and modeling. That’s when her coach, Natasha Lytess, featured her in a movie with the Ladies of The Chorus, and that is also where she was recognized by 20th Century Fox. They were able to witness first hand just how amazing her voice was when she sang– it landed her a seven year contract with them. Then, she got married for the second time to baseball legend, Joe DiMaggio, it only lasted 9 months before they got divorced. This lead her to do psychoanalysis to learn more about herself. During this time she met well known playwright, Arthur Miller. They fell in love, and got married. A few years after their marriage, Marilyn, and Arthur had to experience the awful pain of losing two children due to miscarriage. They fought a lot because of this. So, Marilyn grew depressed and turned to pills, and alcohol. Since she was so drug dependent she was dropped from the current movie she was acting in. On the 5th of August, 1962, Marilyn at the age of 36 was found dead in her home from barbiturate poisoning(overdose) though it was thought to be suicide.

While reading about Marilyn’s determination, and sadly her unfortunate life, she taught me so much about not letting people stop you from your dreams. So much happened to her, but she still pushed through and became one of the most well known actress of her time. I picked Marilyn because my dad always wear shirts with her on them, so I got curios over time. I am so glad I picked her, because I would had never known just how hard it can be when you’re just trying to achieve your dreams. 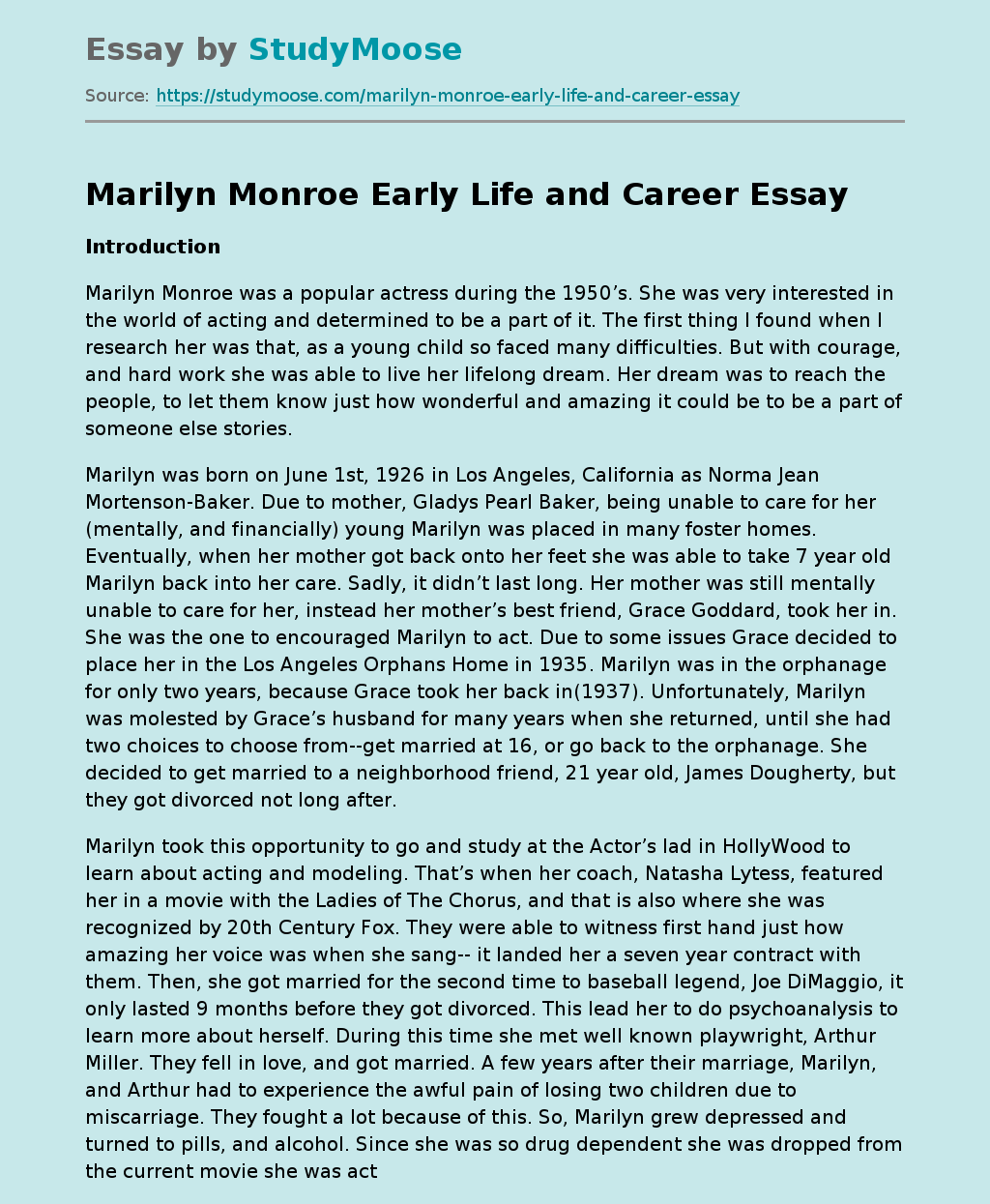