There Are Many Supernatural Elements In "Macbeth". What Effect Do They Have On The Thoughts And Actions Of Macbeth Himself?

William Shakespeare Between 1603 and 1606 in Elizabethan times wrote Macbeth. At the time King James I was on the throne he was king England during this era, and was deeply interested in witchcraft he also wrote a book called Demonologie (1597), which became almost a “bible” for all witch-hunters.

In Elizabethan times witches and witchcraft was a big issue. Prosecution at the time reached dreadful extents. Between 1506 and 1603 hundreds of people (nearly all women) were convicted as witches and as a result were executed.

Don't use plagiarized sources. Get your custom essay on
“ There Are Many Supernatural Elements In “Macbeth”. What Effect Do They Have On The Thoughts And Actions Of Macbeth Himself? ”
Get custom paper
NEW! smart matching with writer

Modern audiences, watching a production of Macbeth, are often puzzled by the supernatural elements. In Shakespeare’s time, the audience knew distinctively what to make of them; they were witches, ghosts, and spirits exactly what they appeared to be, these were all important supernatural elements in the play because they reflected many religious and cultural beliefs of Shakespeare’s society at the time. Throughout the play many supernatural elements appear, for example the opening scene with the three witches who appear in thunder and lightening, predicted encounters that Macbeth interacts with.

We also see Macbeth encounter hallucinations when he sees ghostly daggers before him also a ghostly figure of Banquo.

Shakespeare introduces supernatural elements in the beginning of the play by introducing the three wicked witches. When the witches enter the scene it creates a supernatural atmosphere in the play. In the opening scene the witches talk about the battle the “battle being lost and one” and about meeting Macbeth and their spirits. Shakespeare uses weather to reflect the mood of the scene.

The witches meet in foul weather and speak of ‘thunder’, ‘lightening’, ‘fog and filthy air’. This introduces ‘Macbeth’ as a dark play with a sense of evil and creates a feeling of expectation. Shakespeare also shows that the witches are different in their unnaturalness.

One example to show this is when the witches mention that they will bring “Graymalkin” and “Paddock” their demons who help with their evil work.

From my impressions of the witches I think they are cruel, evil, manipulating creatures that try violating god’s natural order. I think that the witches do evil and harm against ethnical and moral laws in order to scare the audience.

Shakespeare uses rhyming couplets and alliteration to express the language “fair is Foul and foul is fair.” These words contradict each other and introduce the ideas of illusion. It shows that the witches are chanting and are confusing good with evil.

In this scene the three witches wait for Macbeth and tell him he will be “Thane of Cawdor” and “King of Scotland”. In this scene we also notice that the witches also have a great impact on both the characters and the audience.

At the opening of the scene the witches wait for Macbeth while they plot to torment a sea captain wife who has insulted them. The second witch has been “killing swine” and the first witch holds “a pilots thumb.” In this scene we learn the types of supernatural powers the witches have:

“The first witch will change into “a rat without a tail”, this power suggest that they are able to change shape and suggests that the witches have power but are not perfect as that rat is imperfectly formed.

Shakespeare uses repetition when the first witch repeats “I’ll do I’ll do” Ominously. They also show that they are powerful enough to change the weather. “I’ll give thee wind,” and they can also cast spells on people by hinting at things to come “sleep shall neither night nor day/ hang upon his penthouse lid/I’ll drain him dry as hay.” Here they are saying that he will not sleep night or day. His eyelids will be open and they will empty his blood. They also prepare for their meeting with Macbeth:

“Thrice to thine, and Thrice to mine and thrice again to make up nine.” They use their powers and prophesy to predict the future.

Banquo describes the witches to be;

“So withered and so wild in their attrire.

Upon her skinny lips; you should be women and yet your beards

Forbid me to interpret”

Banquo describes the witches as different and wild and do not look like creatures from earth. They have pointy fingers a skinny lips and say they are women but look like men.

The language used by the witches contributes to the supernatural atmosphere. They use rhyming verses, alliteration and rhyming couplets.

“The weird sisters hand in hand

Posters of the sea and land.”

Shakespeare uses these techniques to remind the style of speaking the have and to gain the real feel of their language.

They add rhythm as they speak which confuses Macbeth and Banquo, which also influences the audience to believe the same, and their reaction to be puzzles as well.

a day I have not seen,” this introduces the idea of prophesy.

The witch’s prophecies have so much power over Macbeth because they chose they chose the right moment to approach him, when he was full of battle. They also speak ok Macbeth’s thoughts and know exactly what to say. Macbeth begs the witches to stay and question them. “Stay you imperfect speakers, tell me more.” Macbeth is interested in what the witches have to say that he orders them to tell him more about the future. When the first prophesy comes true, Macbeth believes he has proof that the witches were telling the truth, from now on the witches have control over his destiny.

We also learn the warning, which Banquo gives to Macbeth about the witches.

“And often time do us our harm the instruments of darkness tell us truths,” Here Banquo is trying to tell us that Macbeth will be betrayed as a result of believing these “truths”, he explains to Macbeth not to trust them as it is one of the tricks the devil uses.

This scene introduces the vision of a bloodstained dagger that guides Macbeth to his victim. Macbeth describes the dagger as stained with blood. Banquo also warns Macbeth, he tells him that he has dreamt of the witches and has had evil thoughts.

I think that the dagger is another supernatural element of the play, the reason for this is Macbeth questions his vision “a dagger of the mind”. He knows that it is a false creation because he has surrendered his will to the witches, which is why he thinks that it is his mind playing tricks.

This scene has dramatic tension and atmosphere because when Banquo calls for his sword we wonder why he feels the need for a sword in his friend’s home. Macbeth also shows stress because he speaks a few words when he replies to Banquo. Even though Macbeth is living in a nightmare he is alarmed by the humour as the last lines shows,

“Here it not Duncan, for it is a knell

That summons thee to heaven or to hell”

The last words of the sentence rhyme and show his humour as he talks to himself saying he will either be sent to heaven or hell and it also suggest that Macbeth has given into evil.

This scene focuses on the dramatic role of Banquo’s ghost. Macbeth welcomes his guest to the banquet but once he hears the news of Banquo’s death and Fleances escape his fears renew. Banquo’s ghost is described as “gory locks,” “Thy bones are marrow less, thy blood is cold thou hast no speculations in those eyes.” He describes the ghost to have shapeless bones, blood being cold and no soul in his eyes. Macbeth’s reaction to he ghost shows that he is terrified because he cannot understand the reappearance of the dead:

‘…the time has been that when the brains were out, the man would

Die and there an end. But now they rise again.’

When the ghost appears for the second time, Macbeth confronts the ghost and challenges him to be anything else but Banquo. He tells his feelings of terror and guilt and the ghost seems to disappear. I think that the ghost is a part of the supernatural elements in the play. Shakespeare created the ghost as an illusion he wanted the audience to believe that Macbeth saw the ghost of Banquo and to emphasise his state of mind and how becoming involved in evil deeds can lead one to lose self control, because by being haunted by the dead would be a living hell.

The supernatural elements occur four times during the play. The most affective is the witches as they represent Macbeth’s evil ambitions and unleash Macbeth’s evil aspiration. All the supernatural elements, which have occurred, have changed the character from being a loyal soldier to a murderous king. I think Macbeth is lead astray by these evil forces, which made him do what he did

There Are Many Supernatural Elements In "Macbeth". What Effect Do They Have On The Thoughts And Actions Of Macbeth Himself?. (2020, Jun 02). Retrieved from https://studymoose.com/many-supernatural-elements-macbeth-effect-thoughts-actions-macbeth-new-essay 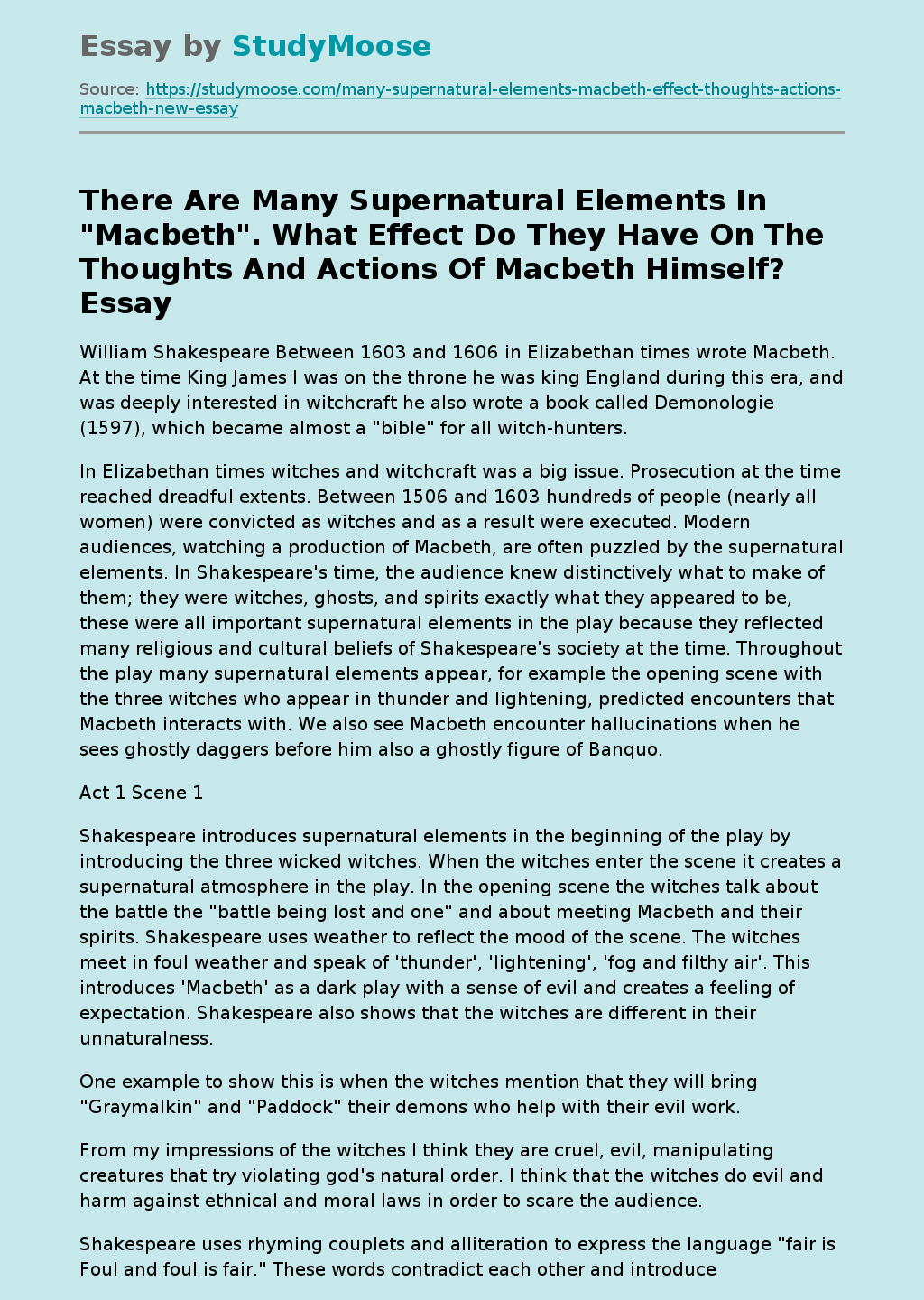