Being a man that believed in balance and leadership, Roosevelt was considered to be known as “the hero of a common man” (Theodore Roosevelt). At the time, he was the youngest man to ever hold office as president (Foner) . During the Gilded Ages, many were only concerned or cared about the bare minimum, whereas Roosevelt had a belief in being a leader as president. He accomplished numerous things during his presidency that helped our nation then and established a system for how we live life today.

Don't use plagiarized sources. Get your custom essay on
“ Major Accomplishments of Theodore Roosevelt ”
Get custom paper
NEW! smart matching with writer

One of his major accomplishments was the Square Deal. Roosevelt was all about balance and being fair, looking at a situation from every angle. The purpose of the Square Deal was to attempt to separate the more established corporations from the smaller ones. During this time, Roosevelt was “the steward for the public welfare”, he felt very passionate about the policies he wanted to establish. In creating the Square Deal, he was able to create a better way for disagreements to be solved by hearing both sides as opposed to having a set of soldiers step in.

Another great accomplishment for Roosevelt during his presidency was creating the Panama Canal. This was a huge moment in history for America when it came to trades and our naval bases across the country. This canal had engineering like no man had seen before, it was monumental! Creating this canal was a major deal to Roosevelt even though he had finished his presidency term by the time the canal was completed.

Without Roosevelt, the canal probably wouldn’t have been completed. The Panama was able to allow ships for cargo or military to transport faster and more efficiently between the Pacific and Atlantic Ocean. The initial use for the Panama Canal was to be able to send naval ships throughout World War I (Foner). To this day, it is still used to transport water vessels for the military. Construction for the canal began in 1904 and was completed in 1914, and was actually ended up being under budget by the time it was completed (The Panama Canal: A Brief History). Roosevelt saw the whole project get up and started even if he wasn’t able to see it through as president (Foner).

To conclude, Roosevelt had a major impact on our country. With his leadership, he fortified many policies we still use to this day in history. He may have been our youngest president elected at the time, but made some of the most impactful decisions for our country. A significant amount of America’s progress was due to Roosevelt during his elected term as president. 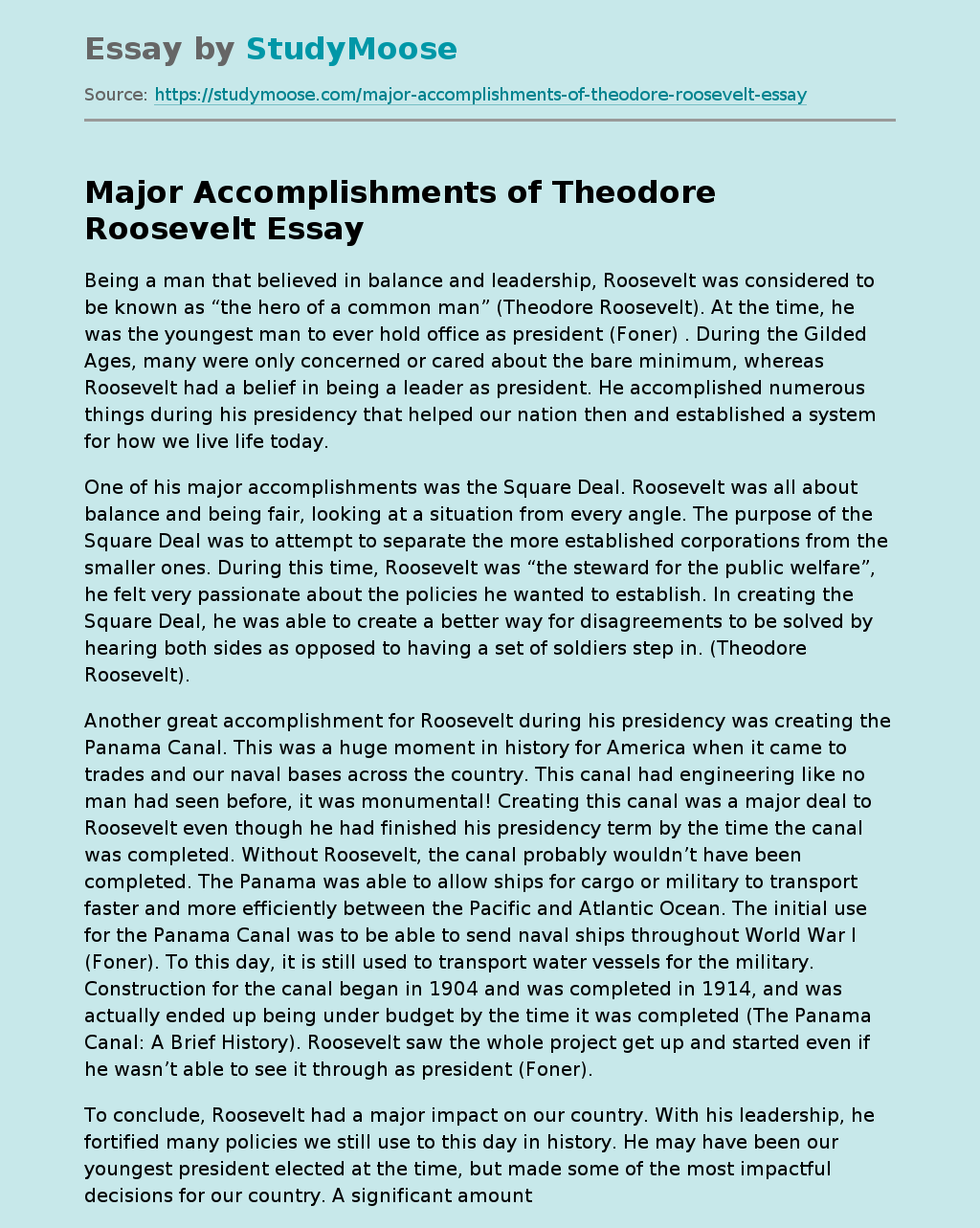