Madness and Melancholy in "Hamlet"

Hamlet, a play considered by some to be William Shakespeare’s most popular work, is easily more than just a play. It is a timeless piece of literature that evaluates some of the most human parts of humanity as well as covers topics that are still relevant in today’s political climate. One of the subjects it touches on is the concept of mental illness, in Shakespeare’s terms ‘Madness.’ This is a very apparent and crucial part of the plot as without the characters personal struggles, specifically Hamlet’s, the events that occurred in the play would have never come to pass.

Don't use plagiarized sources. Get your custom essay on
“ Madness and Melancholy in “Hamlet” ”
Get custom paper
NEW! smart matching with writer

This is covered very early on when Hamlet finds himself contemplating death after the sudden passing of his father. This sort of mental unwellness he experiences is only furthered as the story unfolds and we learn more of the true nature of how his father’s death truly happened. Regardless of this though, Hamlet, throughout much of the play is still presented to be a character of nearly sound mind, which begs the question on how much of his behavior is genuine? Through thorough examination, it can be said that in Shakespeare’s Hamlet, unexpected events can cause feelings of emotional turmoil resulting in a chain of actions that would only be enacted by one greatly emotionally melancholy.

To properly evaluate the mental state of Hamlet during the time of the play, one must first evaluate all that he has endured not just throughout but also prior to the main events.

The first, and instigating incident, of these, would be the passing of his father, the reigning King of Denmark. After the loss of his father, Hamlet is notably different and in a conversation with his mother Gertrude in which she questions his stability. Hamlet says to her “Seems, madam, Nay, it is. I know not ‘seems.’/ ‘Tis not alone my inky cloak, good mother,/ Nor customary suits of solemn black,…/Together with all forms, moods, shapes of grief,” (1.2.76-82). This blatant confession of his grief is understandable considering the circumstances, but, rather the depths of his grief and his change in behavior is what leads this to be the first notice of his potential mental illness, as it is noticed by those around him. Continuing, although losing his father is hard enough, Hamlet is also faced with the ghost of his father claiming that his uncle Claudius, a man who has just married his mother and assumed the throne, was the one who murdered him. His father spirit confesses to him privately; “A serpent stung me. So the whole ear of Denmark/ Is by a forged process of my death/ Rankly abus’d. But know, thou noble youth,/ The serpent that did sting thy father’s life/ Now wears his crown.” (1.5.36-40). This sudden betrayal does nothing but further burden Hamlet with heartache over the circumstances, as well as an undeniable rage. This sensation of rage is only further pushed over the edge when, during the same conversation, his father’s spirit asks Hamlet to take revenge on his uncle and to murder him to obtain justice for the King. The ghost of his father requests of him “Revenge his foul and most unnatural murder”(1.5.25). This request awakens something in Hamlet and fills him with bloodlust as he is willing to go to any lengths to complete this task. Yet, it can be said that a man who is taking the word of a ghost to the point he is willing to commit murder against his own uncle, is not a man who could be considered to be of sound mind. These events together build the underlying madness that Hamlet experiences during the play and what drives his actions.

Additionally, Mental Illness could not be defined as such without the one suffering from it experiencing a myriad of symptoms. The first symptom Hamlet exposes is his suicidal tendencies. After a previously noted conversation in which he is confronted by his mother and uncle for his changes in his behavior, Hamlet speaks to himself expressing his wish to kill himself and his struggle with the religious aspects related to such an act. He exclaims “His canon ‘gainst self-slaughter! O God! God! (1.2.132). This outburst is a very clear cry for help and a very clear stating of his suicidal feelings. The second obvious symptom we see from Hamlet is his self-destructive actions. Take, for example, the scene in which he decides to tell his lover Ophelia that he in fact never loved her. In a conversation with her father, Ophelia recounts the interaction with Hamlet, telling him “My lord, as I was sewing in my closet,/ Lord Hamlet,…/As if he had been loosed out of hell /To speak of horrors- he comes before me”(2.1.77-84). No rational person would act this way towards their loved one, and, to so recklessly hurt someone close to him, shows the self-destruction Hamlet’s illness has sparked within him. Another example of these symptoms we see in Hamlet is his paranoia. Although he is right to feel this way considering the truth in it, he believes that he is being spied upon groundlessly. He also is taking the word of a ghost that his uncle murdered his brother. Hamlet decides to do something to finalize the paranoia and speculation he is feeling towards his uncle and he decides to do this by holding a play which would reenact the events of the alleged murder. His logic is that, should his uncle be guilty, he will leave the play. He explains this plan to his trusted friends saying “lest my extent to the players, which, I tell you, must show fairly outwards, should more appear like entertainment than yours. You are welcome. But my uncle-father and aunt-mother are deceiv’d” (2.2.358-362). To conclude, the symptoms that Hamlet experiences between his early suicidal feelings to the development of his self-destructive behaviors and paranoia are clear examples of symptoms caused by mental illness.

Bringing everything together, it is important to discuss how much of Hamlet’s actions were motivated by his emotional turmoil. It could be argued that his behavior was a carefully planned act intended to deceive and gain revenge on his uncle, and while this point of view may have some decent points, it is also so strongly clear that Hamlet, is suffering from madness so none of his acts could be considered performed acts, as they are spurred by a genuine suffering. During a scene in which Hamlet talks to two gravediggers in a graveyard he performs a number of obscure acts and even the gravediggers discuss his madness, the first stating “Cannot you tell that? Every fool can tell that. It was the very day that young Hamlet was born- he that is mad” (5.1.133-134). This response shows how clear Hamlet’s bizarre actions are to those around him. He furthers this by talking to a skull and speaking nonsense sentences. Another example of this is when Hamlet is first starting this behavior, and Ophelia’s father goes to speak to him about his behavior towards her. The way Hamlet treats him is so blatantly strange that it leaves him baffled and he says“How say you by that? Still harping on my daughter. /Yet he knew me not at first. He said I was a fishmonger./ He is far gone, far gone” (2.2.187-189). While this action may have been designed to portray madness, it is also an act that he is doing to convince those around him that he is mad in an effort to hide his intent to murder his uncle. Now, while it may be hard to decipher the difference between his acting and his genuine moments of madness, they are very similar moments and they are both underlying genuine acts spurred by his grief and paranoia. Hamlet would have done none of these things had he been in a sound state of mind.

In conclusion, the protagonist of William Shakespeare’s famous play Hamlet experiences a great number of tragedy and melancholy in his life such as the death of his father and the betrayal of his uncle. These events lead him to experience a number of mental ailments such as suicidal ideologies, self-destructive behaviors, and finally paranoid behavior. These symptoms lend themselves to the acts he puts on to deceive those around him. These acts are being used to disguise his own plotting brought on by his suffering. With all of this being said, it is evident that through thorough examination it can be said that in Shakespeare’s Hamlet, unexpected events cause feelings of emotional turmoil resulting in a chain of actions that would only be enacted by one greatly emotionally suffering.

Madness and Melancholy in "Hamlet". (2021, Apr 06). Retrieved from https://studymoose.com/madness-and-melancholy-in-hamlet-essay 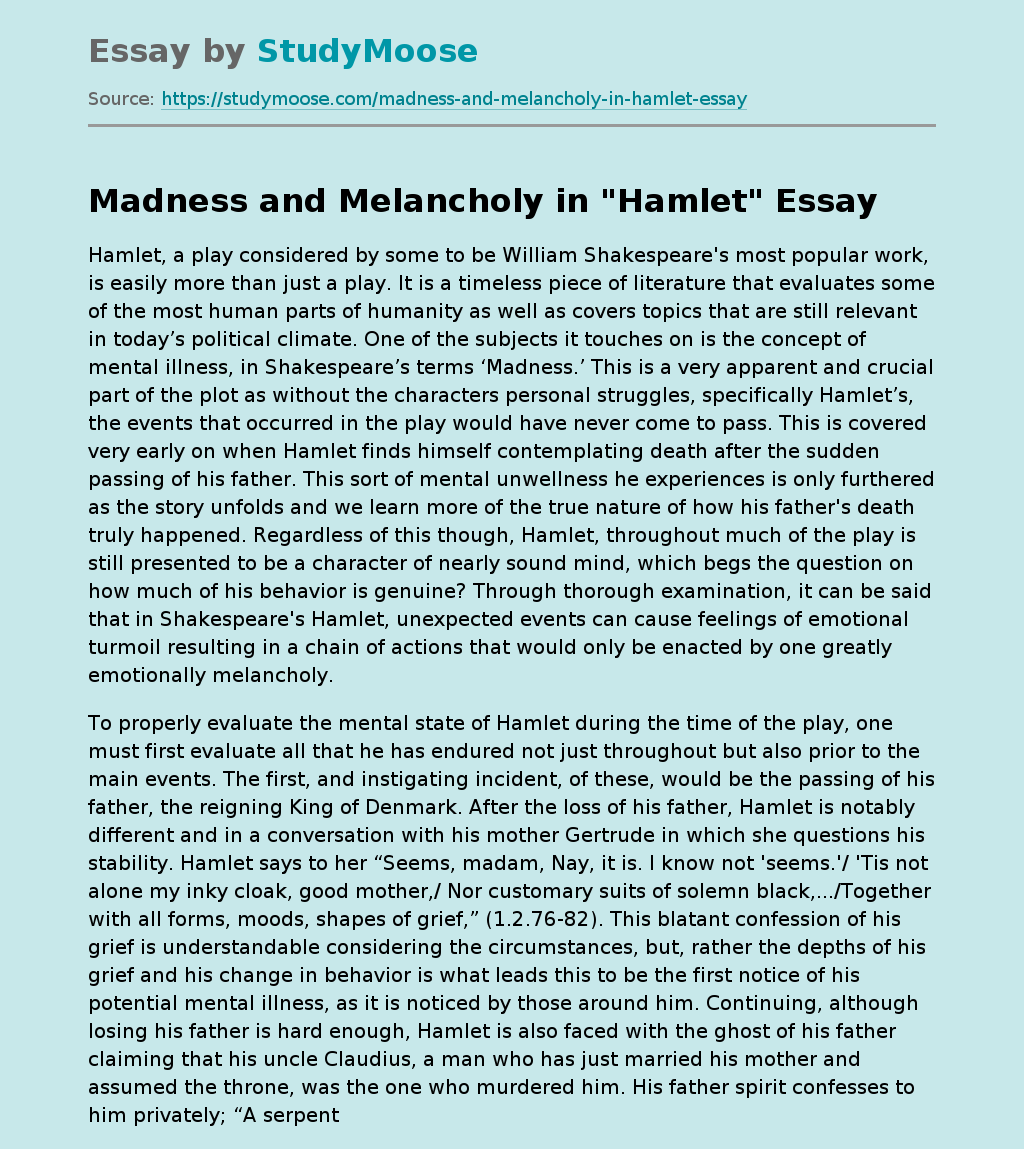