It is perfectly natural to put yourself first. In Macbeth’s case he maybe takes this to the extreme. Digging into the future is a dangerous game; this story is a tragedy of a valiant man, whom people relied on. When Macbeth and Banquo come across the three witches,the three witches tell of Macbeths future. “All hail Macbeth! Thal shalt be king hereafter! From this moment in the story, Macbeth’s ambition is to be king, and nothing would stop him, “If chance will have me king, chance will crown me, without my stir” not even loved ones or friends would stop him.

Don't use plagiarized sources. Get your custom essay on
“ In Macbeth the conflict between ambition and trust results in lethal psychological consequences ”
Get custom paper
NEW! smart matching with writer

When Macbeth murders the sleeping king, it is the turning point of the story. Many questions are raised about Duncan and why he trusted everybody. Duncan comes across as being slightly suspicious, however he is very unsuspicious of everything, in the way that he gives his trust to all, but is that a king’s role? Leading up to the king’s murder, lady Macbeth reads a letter which is written by Macbeth.

Lady Macbeth feels that Macbeth is being squeamish about the king’s murder. As Macbeth is returning home lady Macbeth calls upon her evil spirits, “Come, you spirits”, “unsex me”.

These spirits would assist in the murder of the king Duncan. Lady Macbeth then begins to tell Macbeth to hide his, inner truth and welcome Duncan elaborately. As time draws near to the arrival of the king, Macbeth seems to question himself about his decision and says ‘we will proceed no further in this business.

From this statement it is clear Lady Macbeth is prepared to use violent expressions to show her side and her strong firmness in her own opinion. Macbeth finally draws up enough courage to kill Duncan, but he does so whilst the king is sleeping. Therefore he has murdered sleep, and Macbeth will never be able to sleep again. As soon as Macbeth murders the trustful king he knows that there are going to be many close relatives or friends of Duncan who will have an idea of who killed him. This is why Macbeth recruits three murderers to kill Fleance and Banquo who is also a friend of Macbeth.

This is all leading up to the psychological problems, which occur towards the end part of the play. Macbeth begins to separate from within himself, he becomes so insecure he cannot tell his wife the women who have been urging him on throughout the entire time, about the Banquet. Lady Macbeth is told to take good care and look out for Banquo. When Banquo and Fleance ride to the Banquet they are caught by the murderer’s who kill Banquo but Fleance gets away and flees. Macbeth begins to hear of news that Fleance has fled and begins to hallucinate.

“Which of you hath done this? ” says Macbeth What my good Lord? ” “Thou canst not say I did it! ” Macbeth begins to imagine that Banquo is in front of him, he can see this ghost in front of him this unnerves him, despite the fact that he is still trying to lie to his guests by saying he did not do it. ‘As Macbeth is dealing with the ghost,’ Lady Macbeth is trying to calm the nerves of the guests down. She is also trying to tell Macbeth that her guests are getting rather tired of waiting, “your noble friends do lack you. ” As the ghost exits Macbeth calms down and begins to make a toast when suddenly the ghost returns.

Macbeth begins to become annoyed, “Quit my sight! Let the earth hide thee” Lady Macbeth asks the Lords to leave as they can not carry out the meeting with the ‘king’ in such a bad state. Macbeth is now showing signs of his split personality and his schizophrenic type of disease. As the Lords have left the house Macbeth speaks of visiting the witches to speak of his future. Macbeth states whatever needs to be done or whoever needs to be killed will be dealt with because nothing will get in his way and no one will ever find out.

Macbeths ‘disease’ is not all based on the murdering of Duncan and Banquo, it is also the idea of being found out, it is a mental disease he cannot go anywhere or do anything in case somebody is watching. In act 5 lady Macbeth experiences vivid imaginations. Lady Macbeth who wanted Macbeth to do all the treacherous things has become separated within. She experiences mental images of blood on her hands that will not come off, “will these hands ne’er be clean? ” Although she did not take any part in the killing’s herself she begins to hallucinate terrible imaginations.

She begins to talk of all the people her husband has murdered whilst she is sleep walking, she mentions past murders such as Duncan, Banquo and Lady Macduff. Macbeth hears news of enemy armies approaching, determined to fight to the death Macbeth goes on. The doctor who is trying to find a cure for Macbeth’s illness says he can not cure mental diseases. Macbeth does not care and orders his men to fight. Macbeth hears news of his wife’s death, and becomes fearless; he is willing to take any one on.

His mind is crumbling he has nothing to lose he quotes “No naturally born man can kill him. Macbeth is then defeated by Macduff and lives no longer. In conclusion Macbeth’s ambition and drive to succeed turned him mental. The people that he trusted the most where let down because one man believed from the day he met the ‘three weird sisters’ he could be crowned king. The story is written very cleverly and the reader is made to stop and think on numerous occasions. The story is about separation and hiding the inner truth. It is a very dark story which results in murders and psychological illnesses.

In Macbeth the conflict between ambition and trust results in lethal psychological consequences. (2020, Jun 02). Retrieved from https://studymoose.com/macbeth-conflict-ambition-trust-results-lethal-psychological-consequences-new-essay 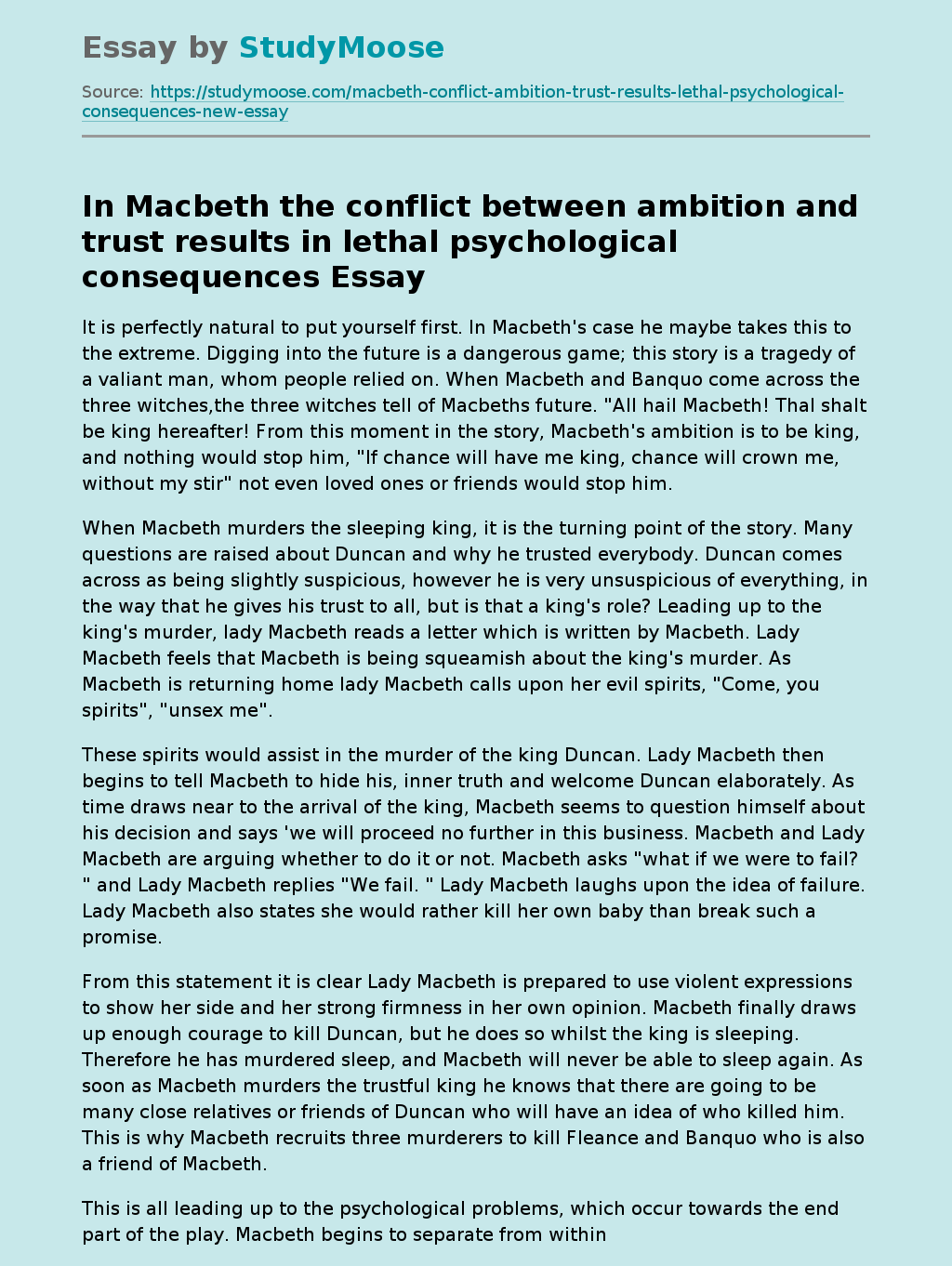