Discuss the Fatal Flaws in the Characters of Othello and Macbeth

Othello and Macbeth are both represented with a number of flaws, which inspire their inevitable downfalls, which were created by Shakespeare to highlight the many flaws of simple human nature. In Othello Iago nearly achieves his goals because of his unmatched ability to persuade and fabricate the truth, which leads to the death of sweet Desdemona and eventually Othello. Brave Macbeth” and “Valiant Othello” are both noticeable heroes at the start of the play complying with the classical definitions of a tragic hero as presented by Aristotle who where the hero should be readily evident at the start of the play but the fact that Shakespeare creates these two overwhelmingly perfect characters demonstrates how far they’ve fallen

Unlike Othello, Macbeth actually loves his wife (she’s not a trophy) so much that he would do anything for her, Shakespeare even goes as far to present his love life without her “like a shadow”, shadows are lifeless, dark and masters of disguise they make people feel hugely uneasy and this is exactly how Macbeth feels.

Don't use plagiarized sources. Get your custom essay on
“ Discuss the Fatal Flaws in the Characters of Othello and Macbeth ”
Get custom paper
NEW! smart matching with writer

Without Lady Macbeth he is lifeless and life “signifies nothing”, this whole fire of wrath, envy and ambition” was conducted by her and now that she is gone it starts to burn out into nothing.

Macbeth feels so abandoned so empty that it is in the monster of envy and ambition that is controlling his sadistic body to do what it does. We must remember that Macbeth never actually wanted this, he was just good in battle, he loved the king as he was essentially one of his good friends.

Macbeth never wanted his title… She did. But now Lady Macbeth is gone. At this point Shakespeare uses clothes to symbolise his incapability of dealing with this new role without his wife. Now he does feel his little hang loose about him, like a giant’s robe upon a dwarfish thief” It seems years that the audience has craved Macbeth’s death but finally it is brought to light that he never wanted this and that it was all these external factors that pushed him into the person he is today.

This creates so much sympathy for him as we remember that he was never a born killer. These are the things that set Macbeth and Othello apart, Othello lives in his little utopia where he is this unbeaten superman and there are no lies or dishonesty.

Where as Macbeth is far more down to Earth and even though his crimes are far worse not only is he wrapt in a cauldron of guilt but it is never purely down to his own faults. Othello however is submerged in blind jealousy. Clearly being in the war for so long has not helped his own personal development because it’s so clear that he is just incapable of telling wrong from right, he has such a poor judgement of character it pains me.

The fact that “honest” is famously followed by Iago just demonstrates his hamartia and leaves us to question his ability to judge people – including himself which relates to his inferiority complex, Othello is subject to the prejudices of a white ruled venetian society. He is so inferior and subordinate to their racist comments (“moor”, “barbary horse” etc. ) not only does this make the audience so displeased because of his high level of ignorance but it is causing his internal emotions to deteriorate and one of the factors that leaves him feeling unworthy of Desdemona’s love – because he is black.

We must remember the xenophobia at such a time in Venice and this provides a reason for why this man is so greedy for power, because what is this man without his status? A slave, and it is because of that Othello is so insecure he will always be trying to prove himself, not only to his immediate associates but to society as a whole as they believe he will never be worth such a status. Desdemona is more than Othello’s love, Shakespeare in fact presents her as his validation because without her his status, this superman that he perceives himself to be is non-existent.

Just the fact that this “moor” is practicing with a beautiful Elizabethan woman raises suspicions, Othello does not wholly believe that he won over Desdemona with wondrous storytelling as he says “happily for I am black”, “I do not have the soft parts of conversation that clamberers have”… As convincing as his long and lengthy speech was his insecurities at this point are so far overstretched he is in fact trying to convince himself of feelings he does not really feel.

Discuss the Fatal Flaws in the Characters of Othello and Macbeth. (2020, Jun 01). Retrieved from http://studymoose.com/discuss-fatal-flaws-characters-othello-macbeth-new-essay 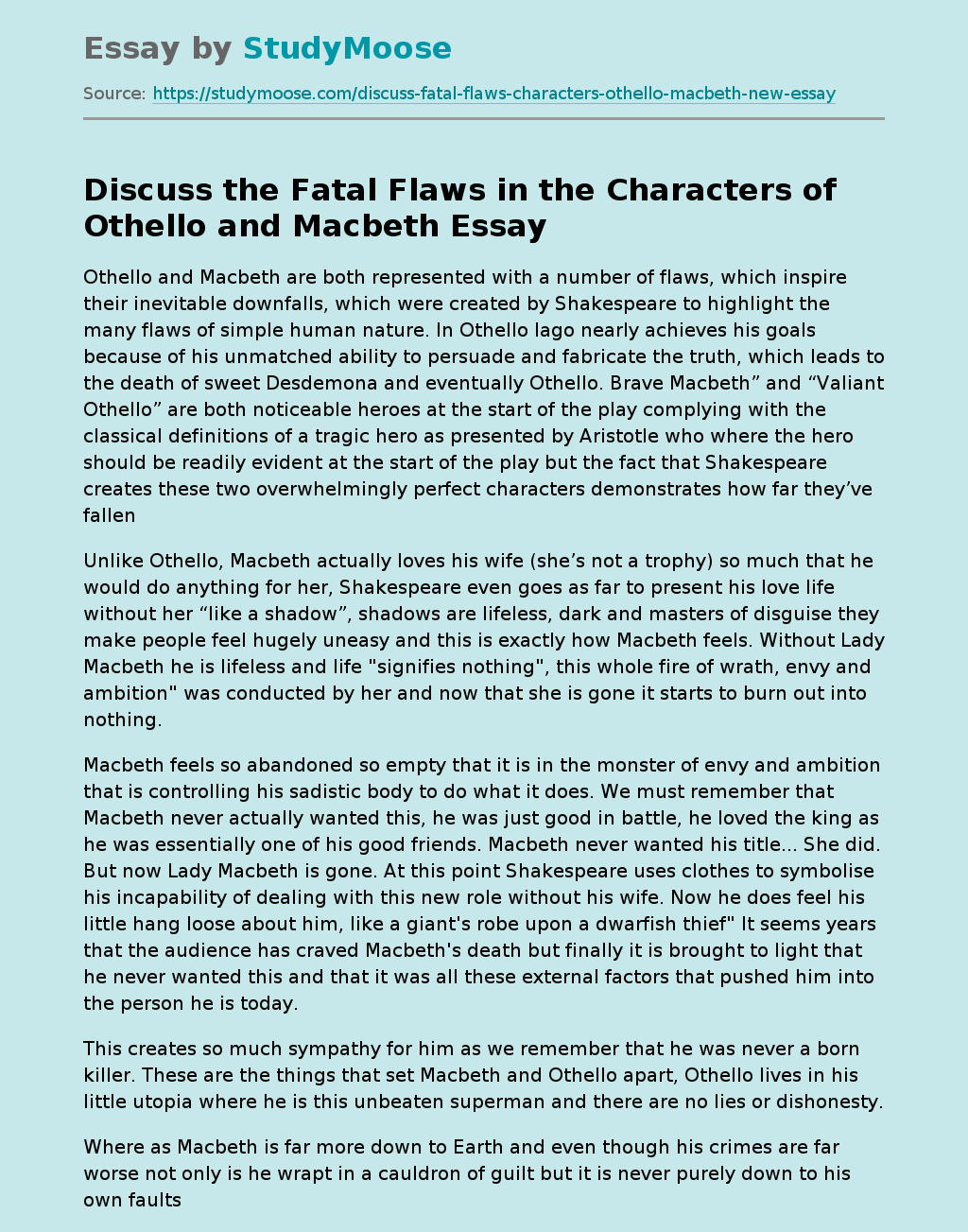