"Lord of the Flies": Qualities of a Good Leader

What qualities does it take to make a good leader? People have always pondered this question especially when electing leaders. They may say that a good leader should be charismatic, intelligent and perhaps good-natured. Their idea of good leadership qualities usually comes from books and movies. In Lord of the Flies there were many various leadership qualities exhibited by the boys, but how can one decide on a leader out of so many boys that would make the society work? Only a leader with the best of the boys’ character traits would have made the society work.

Don't use plagiarized sources.
Get Your Custom Essay on “Lord of the Flies”: Qualities of a Good Leader Just from $13,9/Page

For example, we can see that Ralph was logical, but lacked the ability to make quick decisions. On the contrary, Jack was decisive, yet not very logical or civil. Finally, Piggy was the intelligent advisor, however he lacked the charisma and appearance to get his ideas accepted by the group.

Ralph was a logical and influential leader, but lacked the ability to quickly enforce the directions.

His logical reasoning process helped in identifying the necessities for life. For example, he valued such necessities as fire and shelter above everything else. These were the necessities that would have led them to a stable and civilized society on the island. However, although Ralph had the right ideas, he was not too quick or efficient in getting them done. In fact, the fire was often let out. Similarly, the shelters were something that seemed there to be done until there was something more exciting, at which point the shelters were left uncompleted.

Without direction, the boys on the island often went to do things that were fun. This lack of direction was not at all due to a lack of power. The boys instantly viewed Ralph as a leader with his influential looks and speech. For instance, when Ralph said “fire”, the boys went running towards the woods to build a fire. This kind of authority over the boys was exceptionally important for getting things done, unfortunately Ralph did not use his authority to its fullest. As can be seen, Ralph had the power and logic to do things, yet he lacked the decisiveness to do them quickly.

In contrast to Ralph, Jack was an aggressive instigator, who was always quick to act. Jack was an intimidating figure. The boys often feared what he would do should they not listen to him. Similar to Ralph, this control would enable Jack to get things done. Contrary to Ralph, however, Jack used this
control. He took his choir with him hunting whenever he saw fit. By being decisive, he could quickly and efficiently get things done. However, his decisiveness was not necessarily a good thing, as Jack was very aggressive in nature. His savage nature influenced the others to let their savage sides come out, most noticeably when they were hunting. They would all paint their faces and carry as little as possible. Since Jack was doing it, it was the thing to do. A good leader would not encourage or intimidate people to let out their aggression. Simply put, Jack was decisive and intimidating, but encouraged the wrong actions in the boys.

Last but not least, Piggy was the intelligent advisor to Ralph, yet lacked some important qualities. Piggy’s intelligence was a very important asset to the boys. He knew how things had to be done. Additionally, he had many ideas that would lead the boys to a civilized and safe society. This kind of intelligence is important to any good leadership. Unfortunately, Piggy was not a good public speaker. Not only did he lack the breath to complete a long speech, but he was very shy being a minority group on the island. It is this disadvantage that would prevent him from ever leading, because a good leader must be able to communicate his ideas clearly.

Despite not being good at communicating his own ideas, he was open to others’ ideas. He would consider them and give his own constructive criticism. For example, he agreed with Ralph that fire was important, and suggested that if they could not have a fire on top of the mountain, then to have it by the shore. Any good leader must listen to others’ ideas as any one person can not have all of the best ideas. Piggy’s intelligence is vital to good leadership.

As can be seen, the combined leadership qualities of Ralph, Jack and Piggy would have most likely worked in creating a civilization on the island. Ralph’s logic, appearance, and influential speeches can guide the group to do what is important. Jack’s decisiveness can get the important things done quickly and efficiently. Finally Piggy’s intelligence would provide important information as to how to accomplish various goals, and would keep the island in a civilized manner. None of the boys could have led the group towards a working society by themselves. In conclusion, after understanding this dispersement of leadership qualities in Lord of the Flies, can it really be said that any single person is a good leader?

“Lord of the Flies”: Qualities of a Good Leader. (2016, Jun 21). Retrieved from https://studymoose.com/lord-of-the-flies-qualities-of-a-good-leader-essay 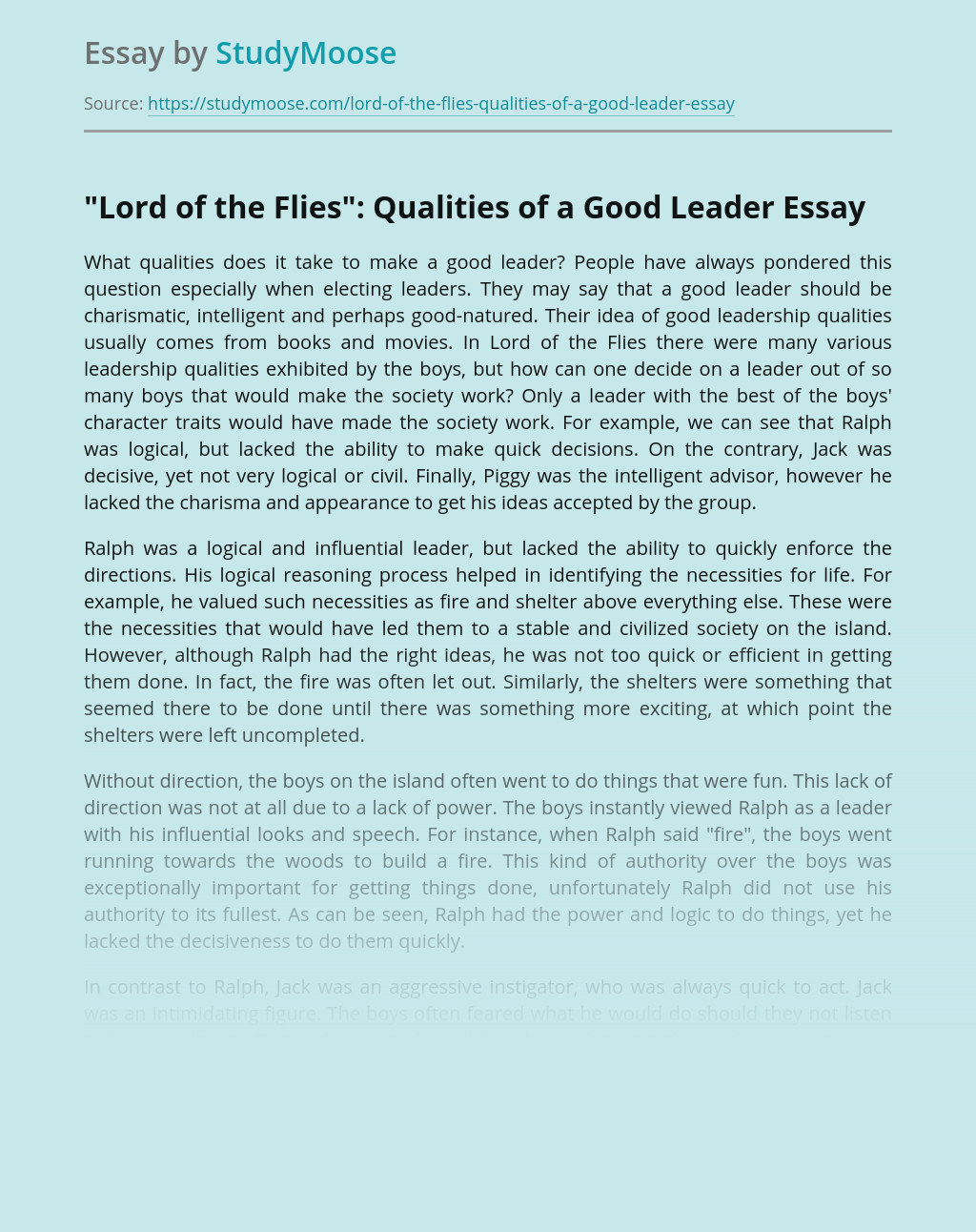 "Lord of the Flies": Why Ralph is the Best Leader

Rate this post In Lord of the Flies, when a group of young boys are stranded on an island and left their own devices, a leader must be chosen. What separates a good leader is someone who cares for the greater good of the group and their well being rather than just caring about themselves....

The Leadership Qualities of Oedipus and Kreon

Rate this post Having leadership qualities means having charisma, resolves and protecting your citizens from any aspects that can come to harm them. The playwright portrays Oedipus as the King who cares for his people above all else and Kreon as a royalty, who attends only to hedonic lifestyle. In the citizen’s eyes, Oedipus is...

Get Essay
Ideal Leaders In Lord Of The Flies

Rate this post Ralph, Jack and Piggy all possess unique qualities. Are any of them ideal leaders? What important qualities do each of them possess (and lack) as regards leadership? Who is the natural leader in Lord of the Flies? This is the question that Golding is making us consider. There is no right or...

Qualities of an Effective Leader

Rate this post Companies today prefer to hire employees who have the most experience at the lowest salaries possible, which in turn does not always produce quality workmanship. The notion is always “time is money” so to be effective they do not want to have to keep retraining people. However, to be properly effective a...

Rate this post Does gender affect the ability of an individual to become an effective leader? Some scientists think that efficient leaders are simply born while others think that effective leadership can be learned. But few of these scientists discuss the difference that gender might make in becoming excellent leaders. When we take an appearance...

The Trait Approach to Leadership

Rate this post Which of the following statements is correct regarding the trait approach to leadership? good leaders are born, not made good leaders have the same set of identifiable traits leadership and management are terms for the same activity leadership ability cannot be explained by an individuals traits some common traits found in studies...

Who is a better leader Jack or Ralph?

Rate this post LOTF by William Golding was published in 1954, which was very shortly after the Second World War. In the story it’s almost as though we see a mini war breakout amongst the boys. Where Ralph is the equivalent of Churchill who represents democracy and stands for peace and wellbeing. Then there’s Jack...