"Lord of the Flies" by William Golding Analysis

Imagine trying to survive on a island alone, a person is lost and could even be in danger with no way to go or no help at all. A lot can go wrong with a person alone on an island.

Since they are alone there is no one there to keep them company which could cause them to go insane. They could even be in danger or need some type of help and not have any one to rely on or to help them try to get out of danger.

Don't use plagiarized sources. Get your custom essay on
“ “Lord of the Flies” by William Golding Analysis ”
Get custom paper
NEW! smart matching with writer

In the novel Lord of the Flies by William Golding there was a group of boys trying to survive on an island. They relied on each other as a group to survive on the island. For example the characters Ralph and Jack. Ralph became the leader at the beginning of the book. However he assigned Jack as the leader of the hunters and his choir as his followers. They could be the army – Or hunters -(Golding 23). After this point on the boys relied on Jack and his hunters to play their part and find them food and to discover the island. Which is a main part of surviving in a group, relying on others in order to survive everyone has to help in order to survive.

In a group there is a lot of knowledge going around and information to help one another. For example Piggy came up with the idea to use the conch to call the others. We can use this to call the others. Have a meeting. They’ll come when they hear us – He beamed at Ralph (Goulding 16). Another time knowledge was spread on the island when they were trying to start the fire. Ralph suggested rubbing two sticks together, Roger suggested You make a bow and spin the arrow (Goulding 40). However the Jack suggested to use Piggy’s specs, Jack pointed suddenly. His specs- use them as burning glass (Goulding 40). Without all the suggestions and communication how would they know what to do?

Surviving in a group is also better than surviving on a deserted island alone because then there is company. There will be people to talk to and a person won’t go insane. In the movie Cast Away, the main character Chuck Noland began to start talking to a volleyball. He was starting to lose his sanity. Being on a deserted as a group that would not happen. In a group a person would have others to talk to and communicate with, keep them company. Having someone else is more beneficial to keep sane.

Others might argue and say that surviving alone is better than surviving in a group because, then there won’t be any disagreement or any types of fit. Another argument is that you only have to worry about one person. For example, Chuck Noland only had to go out and worry about looking for food to feed himself. He had to learn how to hunt and how to make shelter for himself “Cast Away”. In the movie Chuck Noland had a hard time trying to create a fire and he had a hard time trying to survive alone. If he were in a group he would have probably had a better time figuring things out with the help of others around him. If he was in a group he also wouldn’t have lost part of his civility because he would have communication with others, like when he got back to the states he didn’t even talk.

Surviving in a group is better because it is beneficial overall for a person. They will have protection from others to keep them safe. They will also have knowledge and viewpoints to spread around. A person will also have communication in a group. Surviving alone is worse for a person especially because they can go insane without the communication of others. There will no help in times of need. Overall surviving in a group is easier than surviving alone.

"Lord of the Flies" by William Golding Analysis. (2019, Dec 10). Retrieved from https://studymoose.com/lord-of-the-flies-by-william-golding-analysis-essay 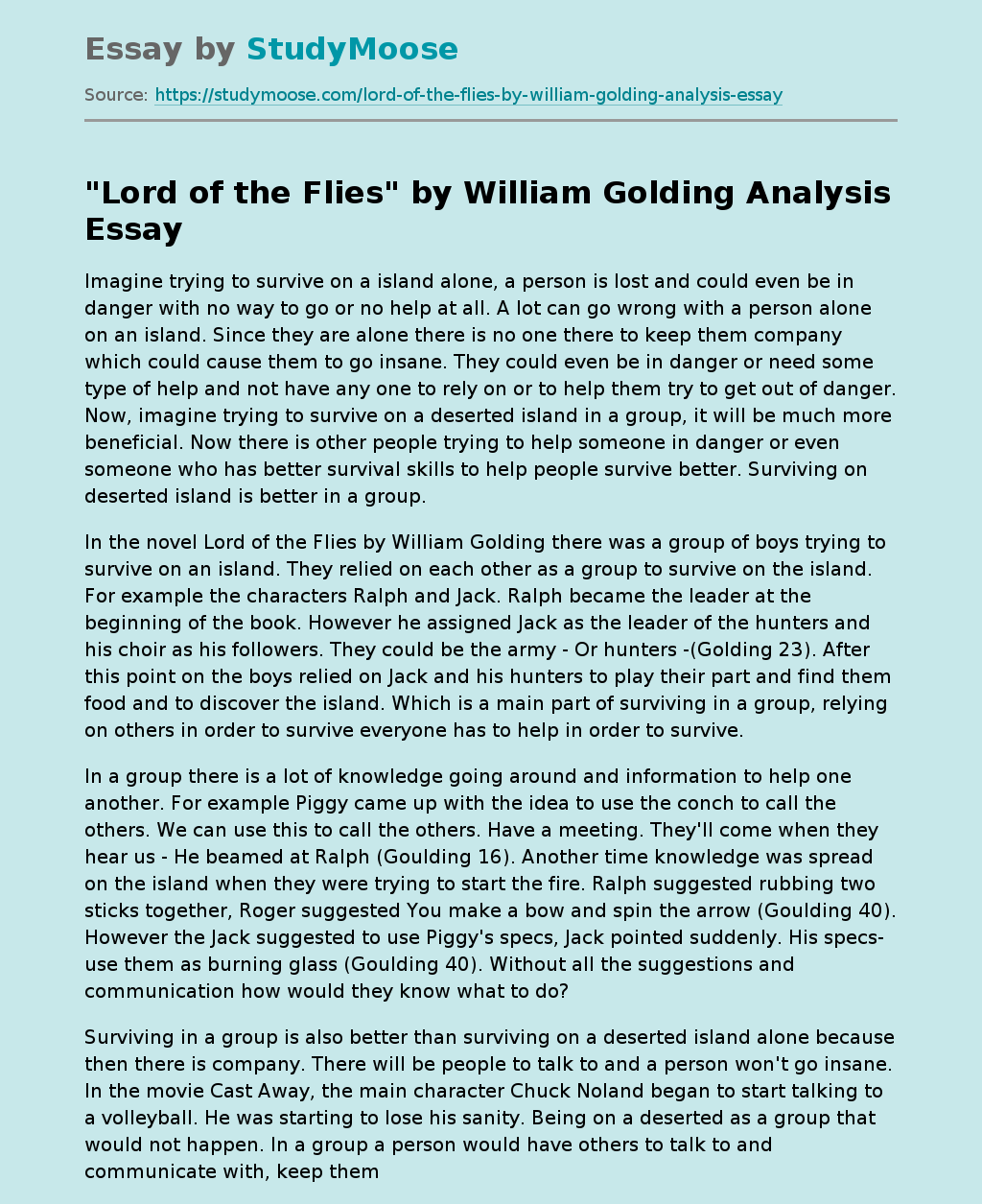