Lord of the Flies, Alternative Ending

Away watching as Jack and Roger walked into the clearing where he sat, “Where could he have gone? There is no where to hide? ” Roger groaned poking the end of his spear into the ground. Ralph felt a urge to stand up and finally give up, but his father had taught him better, his father was a fighter shouldn’t he be too? He glanced around his shoulder noticing the twins break into the trees behind him. They made eye contact and looked away hurrying off towards Roger and Jack.

Don't use plagiarized sources. Get your custom essay on
“ Lord of the Flies, Alternative Ending ”
Get custom paper
NEW! smart matching with writer

Ralph sighed crawling deeper into the burned trees, he looked ahead noticing the burned stick and around it the pieces of bone from the broken pig head. He shuttered standing and holding his spear tightly in his hands. Jack looked over noticing the twins walking slowly towards him he stood straighter, “What? ” The twins jumped before pointing to where Ralph had gone, “He, he went out there. ” Jack grinned pushing the twins aside and walking out into the meadow.

“Well, well, well. Lookie what we have here. He pushed his tangled hair behind his shoulder. Ralph sighed, “Get it over with Jack. ” Roger giggled running out into the meadow, before Ralph could react he was surrounded, hunted down like some kind of animal, the kids looked barbaric, they had all gone mad with their war paint and blood covered spears. Ralph held the spear up in defense. The hunters jumped at him tightening their circle poking him with their spears grabbing at his.

Ralph yelled poking his spear forwards he felt the tip dig into something, someone yelling.

Before he could pull it out, they were on him shoving him to the ground, Ralph dropped his spear trying to fight back, trying to escape the hunters, somehow. Jack laughed stabbing his spear down hitting flesh. Ralph screamed out, begging them to stop. The hunters continued in a clockwise dance, stabbing, poking and kicking. Jack laughed the circle becoming wide once again, Ralph lay in a mess, a puddle of blood appearing around him, he took a shallow breath Jack pushed him with his foot onto his back. Ralph opened his eyes his swollen bloody face making it almost impossible.

He looked up into the sky watching as two birds circling above. He smiled closing his eyes his chest rising and falling ever so slowly until finally for what seemed a lifetime it stopped. Jack laughed taking his knife and kneeling down. A few weeks later a large vessel anchored, two rowboats neared the island, coming onto the beach. The navy officers in their blue uniforms looked down at the rotting flesh of the small children some looking as if they had their limbs cut off with a badly sharpened knife.

The officers held their guns close walking around the island. They finally made their way towards the meadow stopping in their tracks at the sight of a head planted firmly onto a stick, his fair hair falling over his rotted flesh, some Navy men turned at the sight. A few yards from the head sat a boy his orange hair falling over his eyes in a shaggy mess. The officers walked closer pushing the boy with their guns. He was mumbling to himself, slowly fading away. Around the boy lay masses of bones.

Lord of the Flies, Alternative Ending. (2016, Oct 01). Retrieved from http://studymoose.com/lord-of-the-flies-alternative-ending-essay 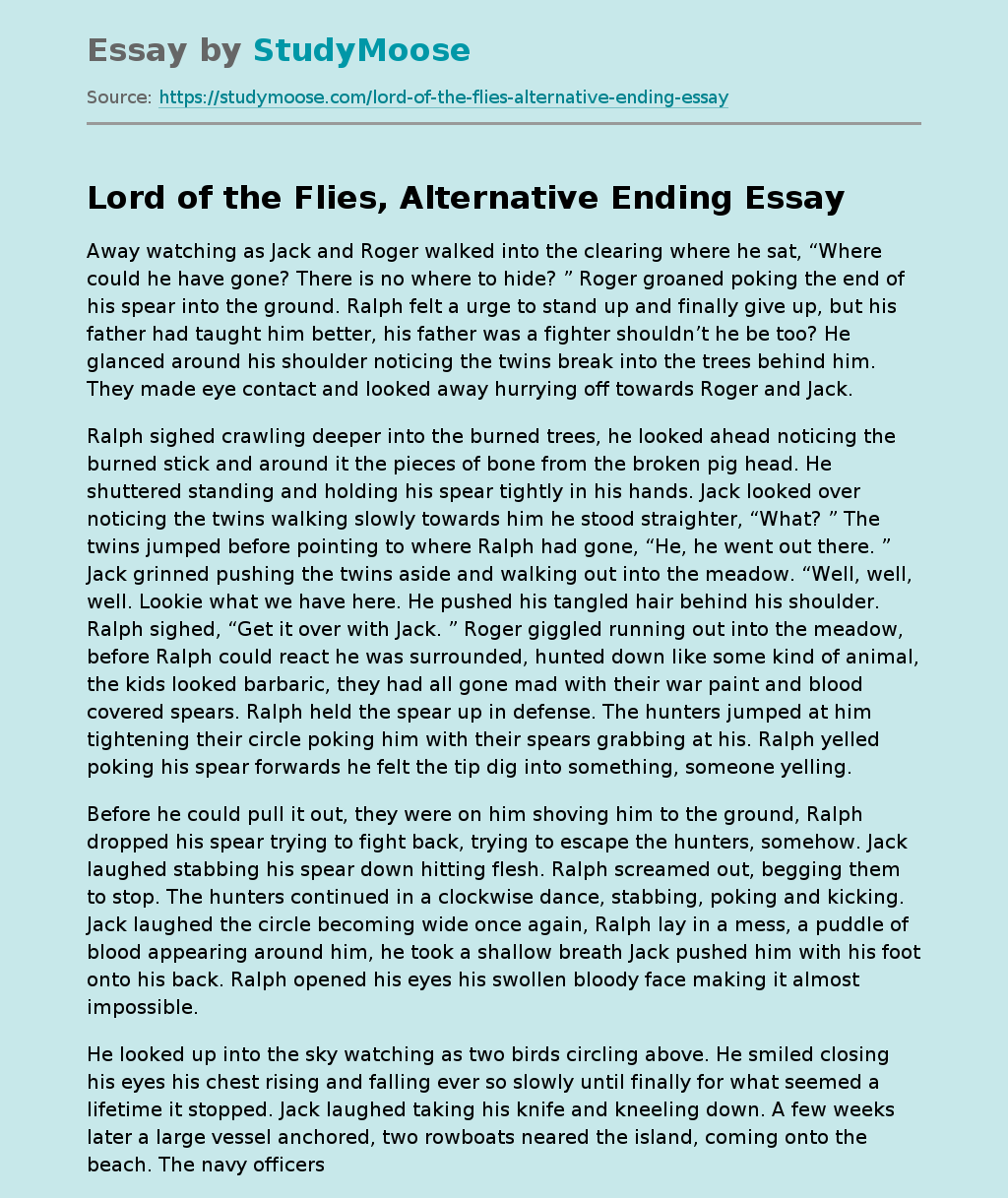