Lord of the Flies Coursework: "Jack should have been elected leader in the first place"

This question is answered in different ways in different areas of society depending on whether the person asked is left or right wing. Therefore the answer can go either way. Where power should be placed in a society is obviously at the heart of the issues affecting leadership. It is debated whether it is best for the majority to decide for the minority, or for the minority to decide for the majority. Jack has an obvious fascination with power from his entering the novel.

Don't use plagiarized sources. Get your custom essay on
“ Lord of the Flies Coursework: “Jack should have been elected leader in the first place” ”
Get custom paper
NEW! smart matching with writer

He is described as being “the boy who controlled” the choir.

His militaristic control over the choir is illustrated when he marches into the assembly of boys with an air of arrogance and his “cloak flying”. He also assumes control of the entire group and indeed the entire island by saying “I ought to be chief… because I’m chapter chorister and head boy”. This assumption of leadership is possible to be viewed as a good quality because it shows that he is willing to take control of whatever situation comes around.

However, a much more plausible view is that he is not interested in the future of the boys or their life on the island, but in the establishment of a power base that overrides anyone else.

Indeed when the idea of a vote was mentioned, he lost all control of the situation and was outnumbered even by his own choir. His arrogance soon turned to embarrassment when the “freckles on his face disappeared under a blush of mortification” in the losing of the vote.

Voting is democratic and Jack’s arrogance suggests he believes he is above everyone else and that the vote gives power to those who do not know what to do. There is a bizarre bond between Jack and Ralph and Jack has a “shy liking” for Ralph at the start.

Jack is impressed by Ralph’s commands to the boys such as saying “Seems… e ought to have a chief” and his betrayal of Piggy’s trust at the start by telling everyone that he is called Piggy. Ralph even displays some tolerance towards his opponent after the vote by making him chief of the choir as a sort of consolation. However mild conflict arises between the two when Ralph says “we must make a fire” to attract the attention of passing ships to be rescued. Immediately Jack seizes the chance to take control and he sees something destructive. In his enthusiasm, he leaves the “conch forgotten” and shouts “Come on, follow me”.

This inciting of excitement in the group by Jack meant “no one heard” Ralph as he shouted for quiet. Jack’s interest in the fire is purely destructive, while Ralph sees rescue in it. Therefore, much of Jack’s hostility is directed at Piggy and not at Ralph. Although Ralph does become leader, he does not directly represent democracy in the way Piggy does. Piggy protects the conch and was worried for it when Ralph used it as his “plaything”. Jack was in direct conflict with Piggy when he “held the fragile thing… with sooty hands” showing a complete disregard for the democratic meaning Piggy invested in it.

From the start, Jack not only identifies Piggy as a fat unpleasant boy, but as a threat to his power. When Piggy tried to speak on top of the mountain, Jack was the first to try to disregard the new rule of only speaking when holding the conch. He tried to claw meaning from the different location by saying “The conch doesn’t count on top of the mountain… so you shut up”. This type of bullying and attack takes place on many occasions Another of these occasions is when he wanted to light the fire. As soon as Piggy drew attention to himself, he “pointed suddenly” and shouted “His specs – use them as burning glasses!

Because Piggy has such a clear moral vision, the use of his glasses to light the fire is an ideal stab at Piggy. Jack was the first one mentioned in the group of boys to turn noticeably barbaric. When he was hunting fairly early on, he was naked except for his knife belt and a pair of tattered shorts. “He was down like a sprinter” and “crouched with his face a few inches away from” the earth. This barbaric behaviour and ultimately his desire to hunt, kill and wield power over animals is an excellent release for his craving for control.

He is the first to rebel against the old society in England with rules, morals and taboos and is effectively the instigator of lawlessness. Hunting is an extreme of his ideal scenario of the island. He wants all the boys to have no say whatsoever and he to have total control. Jack starts to become irritated with Ralph’s system of leadership. The little power Jack does have in effectively owning the meat he kills he uses to include and exclude various people from meat eating. He does include Ralph because if he didn’t, Ralph would have still had control to punish Jack.

However, Piggy is not included in the meat eating and when Simon donates some meat to Piggy’s cause, Jack becomes angry. He shouts that he “got [them] meat” and implies therein that he should have control. Unfortunately, a small area of totalitarianism does not work. Jack wants more power and enters a blind rage with “inexpressible frustrations” because all his expectations that the system would work have been destroyed in an act of kindness that he agrees with fundamentally but that his morals and ideals do not allow. This is the ultimate flaw in Jack’s philosophy.

He wants to be a despot but cannot be because the ethics that have been drilled into him by his upbringing still exist. Jack should not have been elected leader because he has too much fascination with power and control. Right from his civilised choir army through to his barbaric desire to hunt, he is blinded by his compulsion to organise things his way. If elected leader democratically, Jack would have let his own ideas override those of the boys themselves. A simple example of this is his obvious disinterest in religion.

Religion is a powerful tool used by the masses as an excuse for rebellion against dictators as demonstrated by numerous historical martyrs against various regimes. As a chapter chorister and choir leader he should uphold religion, but it is a power beyond his control and one that simply cannot be allowed to exist. He was made leader of the choir by the church and has disregarded his responsibility for religion in place of his despotic commands over the choir. If elected, Jack would have overseen the destruction of the boys on the island just as he lit the fire on the mountain.

Lord of the Flies Coursework: "Jack should have been elected leader in the first place". (2020, Jun 02). Retrieved from http://studymoose.com/lord-flies-coursework-jack-elected-leader-first-place-new-essay 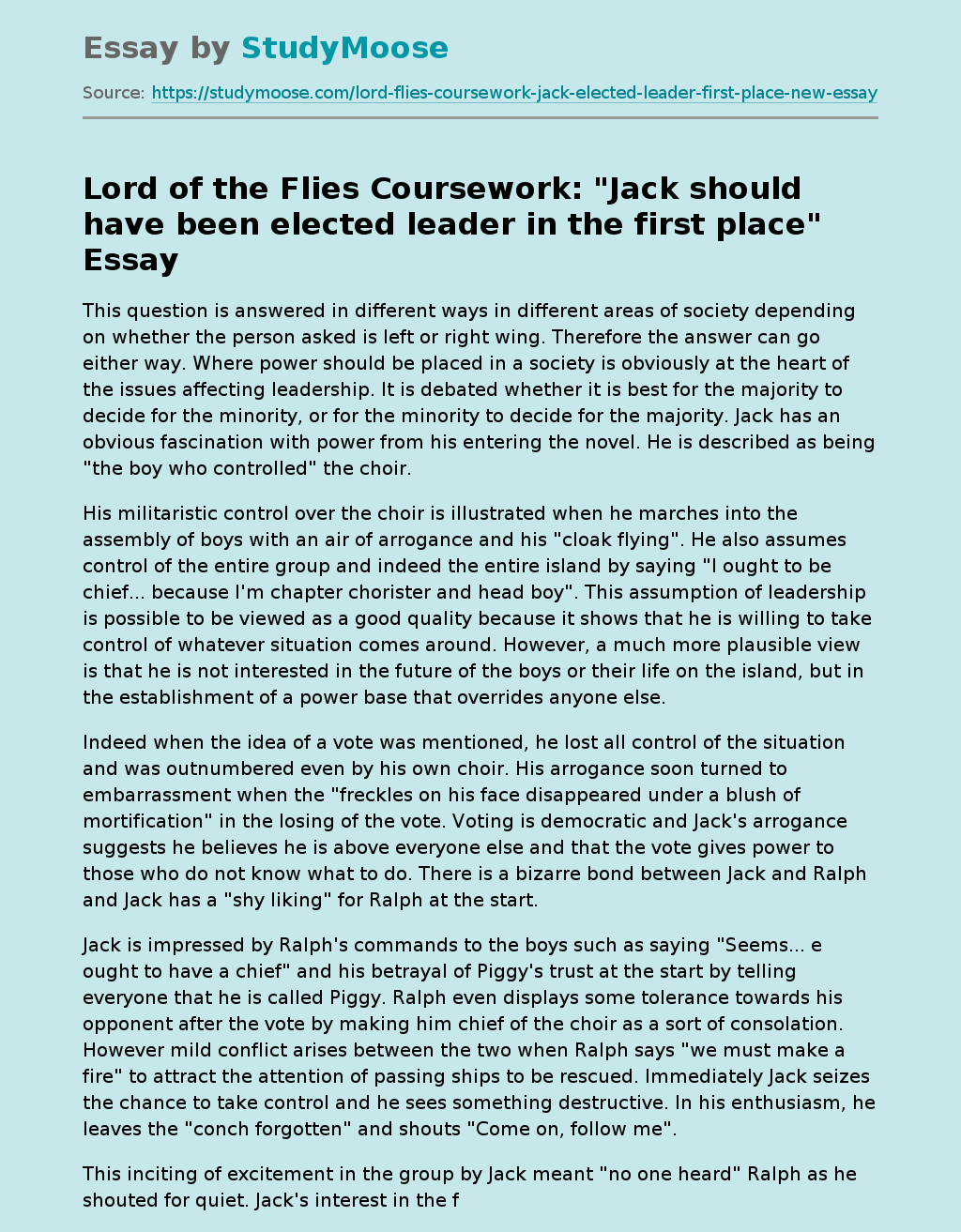