Lord Chesterfield used litotes (understatement), a pedantic tone, and a hint of a condescending tone in an attempt to convince his son to follow the advice that Chesterfield provides in the letter. When concluding his letter he warns his son that failure is not an option due to the humiliation it will bring.

Lord Chesterfield used litotes to make it seem as if he was not forcing his advice upon his son, but rather offering it in a kind matter.

Don't use plagiarized sources.
Get Your Custom Essay on Lord Chesterfield Rhetorical Analysis Just from $13,9/Page

Litotes were primarily used within lines three through eight when understating his authority over his son. He says “I know how unwelcome advice generally is; I know that those who want it most, like it and follow it least; and I know, too, that the advice of parents, more particularly , is ascribed to the moroseness, the imperiousness, or the garrulity of old age.” Chesterfield used litotes once again in lines eight through eighteen when he says that he flatters himself to think that his son, in his young age, will follow his advice.

Lord Chesterfield uses both a pedantic and condescending tone in an attempt to assert authority over his son. A pedantic tone can be noted most obviously in lines 23-25 when Chesterfield says “those thorns and briars which scratched and disfigured me in the course of mine.” I believe that he wants his son to know that he has experienced things in his past that has scarred him and that he should be careful and he leaves home. The condescending tone can be noted in lines 25-30 when he says “i do not so much as hint to you, how absolutely dependent you are upon me; that you neither have, nor can have a shilling in the world but from me”. I think he inserted this sentence in an attempt to make his son realize how dependent he is upon him and that he may not even be anything without him.

Within the last paragraph he tells his son that he must use the education he has received to come out above everyone else (lines 35-41). Chesterfield says “for can there be a greater pleasure than to be universally allowed to excel those of one’s own age and manner of life?” He also says that there is nothing worse than to be excelled by those others. He says that given his sons education above everyone else’s his shame and regret will be much higher than anyone else’s if he does not excel ( lines 43-47). Although Chesterfield makes it seem like his sons failure will do his son the most harm, I think that he doesn’t want his son to fail because it will reflect poorly on him.

This letter seems more like a warning than an affectionate send-off. Chesterfield asserts his authority over his son and warns him of troubles he may face based on his own youth. He also lets his son know of his expectations for him, so that he will know that returning as a failure will not be accepted. 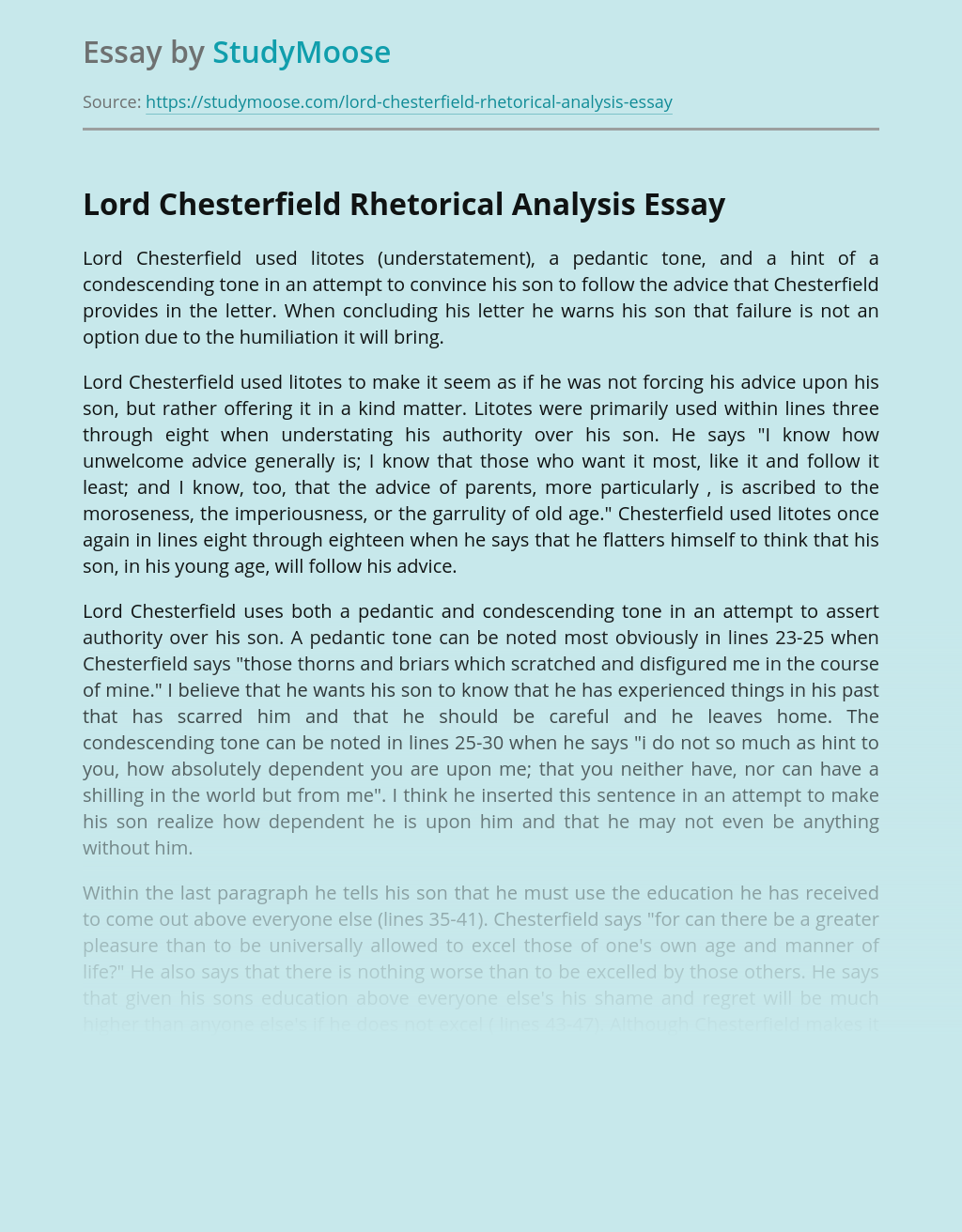 Rate this post Greasy Lake by T. Coraghesan Boyle’s is the story of a group of adolescents, searching for the one situation that will proclaim them as bad boys and how their minds change. The greasy lake is a short story which the narrator uses details, imagination and language to describe and represent the moral...

Students are stakeholders in their own educational system

Rate this post A stakeholder is an individual or an entity that stand to gain or lose from the success or failure of a system or an organization. From a business perspective the stakeholder analysis theory asserts that an organization should pay greater attention to its stakeholder’s suggestions and services in order to incorporate them...

Rate this post Electric bicycles are good for city use, but really only city use. They let you breathe less fumes, don’t emit much pollution, let you commute to work without being sweaty, and carry your groceries home up and down the hills without much effort. They make daily life a little more convenient without...

Rate this post Poetry is when an emotion has found its thought and the thought has found words. Good morning Ms Linton and students, today I will be informing you on why you must choose these two poems for the poetry speaking contest. The poems I have chosen are ‘The Man from Ironbark’, by Banjo...