Long Road to Utopia: Migration in South-East Asia Without Borders

Free mobility of labor is often cited as a significant issue in the discussion about open borders to allow the free mobility of people since the globalization changes the trend of investment across national borders in order to seek low-wage labor with low negotiating power, combines with approaching a complete aging society in the future, labor shortage or surplus demand for labor will be more severe. International migrants are viewed as a solution to alleviate the problems.

In 2019, the total international migrants are estimated 272 million people or 3.

Don't use plagiarized sources. Get your custom essay on
“ Long Road to Utopia: Migration in South-East Asia Without Borders ”
Get custom paper
NEW! smart matching with writer

5% of the world population (IOM 2019, 21). On one side, open borders advocates claim that the world economy is driven by the international migrant labors. Clemens (2011) argues that open borders in labor-free mobility would make the global population trillions of dollars richer. In the context of international labor migration, Migrants are beneficial in various aspects including increase the gross domestic product (GDP) in both origin and destination countries. Remittance was an important source of the country development budget, increase the level of national saving, and improve income distribution.

In South-East Asia, CLM migrants are estimated for contributing the real national income on average 25.3 US million dollars per year. (Pholphirul et al. in Sciortino and Punpuing 2009, 75).

While most of the open borders advocates represent the estimated tremendous profits that migrants can contribute towards the world of labor without borders. With a specific focus on South-East Asia, This essay aims to challenge these views by scrutinizing different perspectives and demonstrate the reasons why all countries should not open borders to allow the free mobility of labors at this time.

After the establishment of the ASEAN Economic Community (AEC) in December 2015, ASEAN has allowed free mobility of seven key occupations under the Mutual Recognition Agreements (MRAs); Engineering, Nursing, Architecture, Medicine, Dentistry, Tourism, Surveying, and Accountancy. According to the United Nations (UN), Singapore hosts a large number of professionals and skilled workers, there are 1.1 million Malaysians living in Singapore, with over 200,000 estimated to be tertiary-educated (World Bank 2014, 36). Aside from Singapore, the share of highly skilled migrants in other ASEAN countries remains low. Unfortunately, the shortage of publicly available data makes it difficult to evaluate the scale of high-skilled worker migration within ASEAN. Furthermore, the purpose of the AEC’s free flow of skilled labor policy does not support the fact that most intra-ASEAN migrants are low and semi-skilled workers (Orbeta 2012).

Due to most of the migrant workers were from low educational backgrounds, thus most of them become victims of exploitation and human trafficking from the agencies and employers in particular undocumented workers. The relevant research focuses on transnational worker’s welfare in developing countries; Thailand as a case study, revealed that almost Burmese migrant workers are not part of the poorest cluster in their home countries, they migrate to Thailand with the expectation of higher-income albeit, in fact, the Burmese workers in heavy industrial areas, such as Samutprakarn province, represent the emergence of ‘Precariat’ as the underclass who live in unstable conditions with no social protection, work 70-80 hours a week, yet earn low-wage than the minimum wage of Thai workers under out-sourcing and temporary employment (Thammaboosadee & Somboon, 2014). In addition, by the weakness in law enforcement of the authorities, even though, the Thai government has regulations regarding prevention and protection migrant workers; labor law and labor protection act, the memorandums of understanding (MOU) in regional and bilateral level but these measures have not been effective (Paitoonpong & Chalamwong 2012, 40-46).

A discussion on open borders may not be promising in South-East Asia at this time as these pieces of evidence reflect that South-East Asia countries cannot properly manage migration unilaterally (Battistella, 2007). The long road to open borders in South-East Asia will not be easy, the experience of the European Union may be instructive here. The first step is to assure that ‘no one will be left behind’. The governments of origin and destination countries as well as multinational capital groups need to participate in the provision of bilateral or multilateral cooperation on welfare and rights which cover the humanity of migrant labors. Moreover, the negotiation must consider possible social costs such as criminality and slum; providing suitable community for migrants will lead society to less social problems and more unity. Even I do not agree with open borders in labor migration at this time. However, I still have a glimpse of hope and belief that migrants are not threats. It requires people to move past the traditionally superficial viewpoint of seeing migrants as a necessary evil or seeing them as mere machines to spur economic indicators more impressive or tolerate the 3D (Dirty, Dangerous and difficult) works because no one wants to. 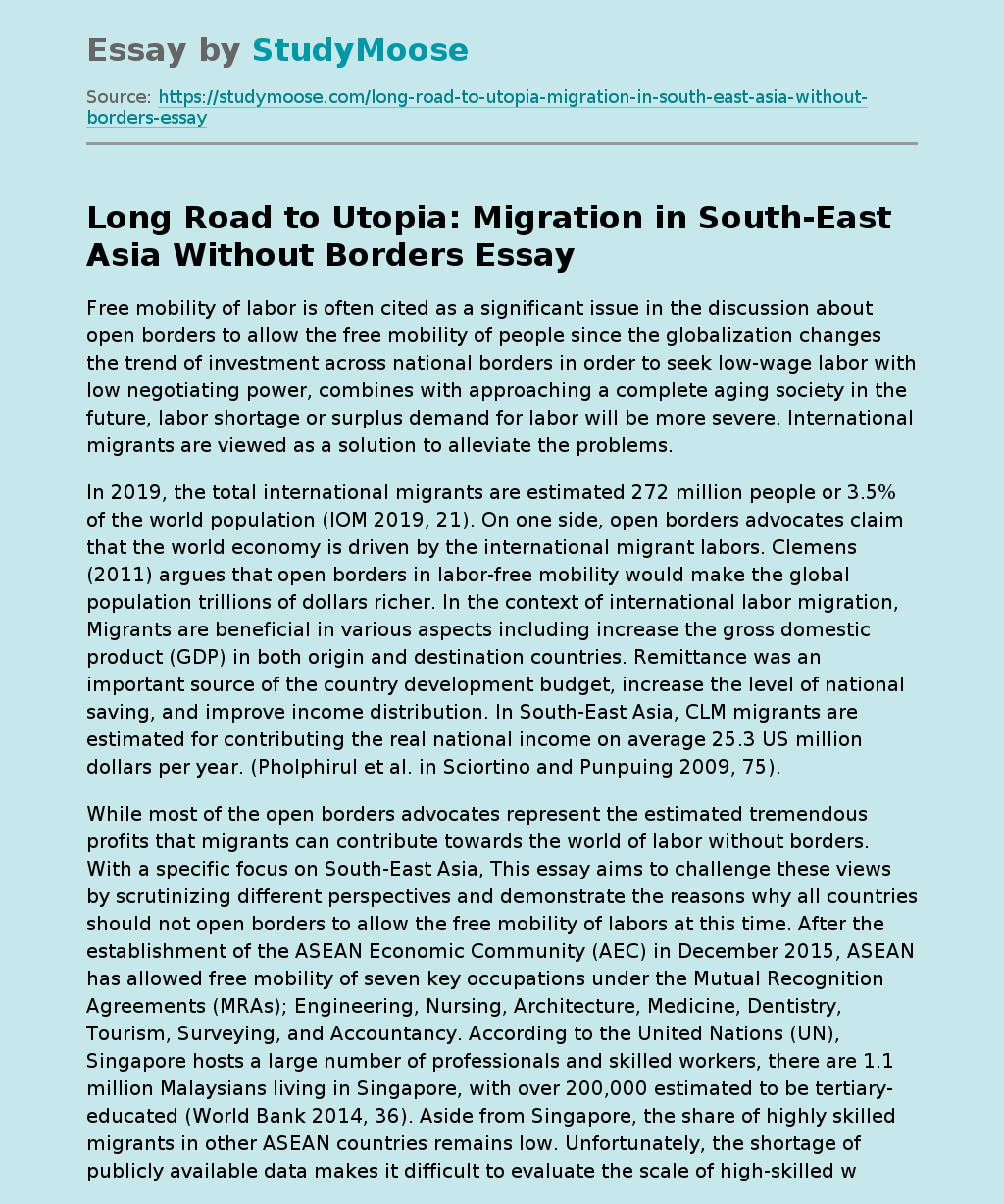