Huckleberry Finn, a tale about a boy and his struggles with the society in which he lives, is written by Samuel L. Clemens. In the story, Huck manages to escape from the custody of Widow Douglas and travels down the river to a nearby island where he encounters Miss Watson’s runaway slave, Jim. Together, they float down the Mississippi River, to find a new life, where they can live freely and easily. The Adventures of Huckleberry Finn is perhaps the finest example of “local color”, an emphasis which is laid on the surrounding settings.

Don't use plagiarized sources. Get your custom essay on
“ Local Color In Huck Finn ”
Get custom paper
NEW! smart matching with writer

Throughout the novel, Clemens accents “local color” by illustrating the natural scenery, the way of thinking, and the distinct practices and folklore encompassing the area.

The novel’s plot revolves around the Mississippi River. The river breaks all the barriers of the time period, between black and white, young and old, slave and free. With their many journeys on land, they invariably return at the raft.

While stopped in a near by village, Huck and Jim manage to escape the king and the duke, seeking refuge on raft. “It was the raft, and mighty glad was we to get aboard of it again”(Clemens 1309). Later on in the novel, at the Phelps Farm plantation, Tom and Huck learn that Jim is held captive in a hut just beyond Aunt Sally’s house.

They devise a scheme to get him out, involving digging a tunnel, sawing off a leg of a bed which Jim was chained to, using a rope ladder, and having Jim flee from a makeshift window.

The plan runs smoothly, all three exiting through the man made hole, until Tom gets caught on a piece of wood, which creates a clamorous noise. At that moment, they began their retreat in a hurry. Fifteen men, equipped with rifles and dogs, begin their hunt for the three outlaws: “Then we struck out, easy and comfortable, for the island where my raft was; and we could hear them yelling and barking at each other”¦”(Clemens 1442). They manage to, once again, get away seeking protection on the raft.

The raft shielded both Huck and Jim from nearly every obstacle, yet slavery was still present no matter where they were. During the time this novel was set, just prior to the 1860’s, slavery prevailed all across the United States, especially in the South. Slaves were thought of as property for the white man to own, thus making them inferior. It was not until the Civil War where the slavery issue was addressed and eventually resolved. Throughout the story, Huck and Jim travel down the Mississippi in search of freedom. Jim escapes from the possession of Miss Watson, fearing she was going to sell him down the river and thus separate him from his family. At one of their stops, at the Phelps farm, Huck hears a story from Tom’s Aunt Sally about an explosion on a boat: “It warn’t the grounding ” that didn’t keep us back but a little. We blowed out a cylinder-head. Good Gracious! Anybody hurt? No’m. Killed a nigger. Well, it’s lucky; because sometimes people do get hurt”(Clemens 1409). Ultimately, at the culmination of the novel, Miss Watson grants Jim his freedom, as stated in her will.

Much of the population of this time based most of their practices and rituals on either the Bible or folklore. Jim, Miss Watson’s slave, had a hairball, taken from the fourth stomach of an ox. He believed this hairball was a prophecy, which truly spoke to him. In another episode, while Huck is stranded on Jackson’s Island, he hears loud explosions in the distance: “You see, they was firing cannon over the water, trying to make my carcass come to the top”(Clemens 1287). It was common knowledge of the time that when a dead body is in a river, the vibrations from the cannon ball will enable it to rise and float. Furthermore, residents believed that when quicksilver was put into loaves of bread, it would float to the dead carcass.

The Adventures of Huckleberry Finn has numerous instances in which “local color” is present. Throughout the novel, heavy focus is laid upon the Mississippi River, and the villages close by. Common men and women used superstition and folklore to explain and solve life’s natural phenomena. Along with this is the portrayal of the brutal aspects, both physical and psychological, of slavery. At the conclusion of the novel, all hurdles are overcome, and Jim and Huck become free. Most of the population of this time was narrow-minded, being on the river, away from society, allowed Huck and Jim to overcome these bounds. 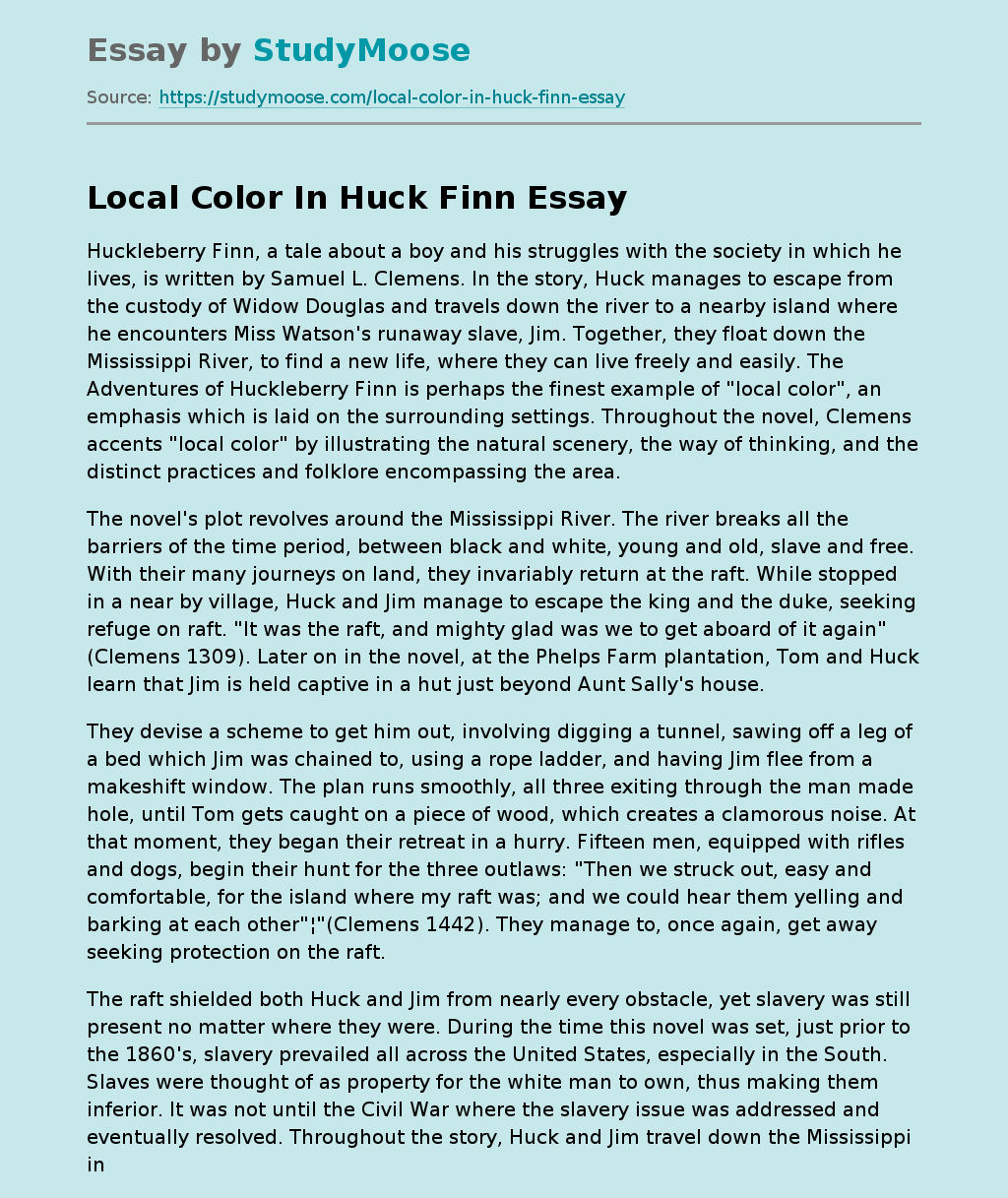